At the college which would become Harvard, as early as 1637-39, Nathaniel Eaton referred to"the frame in the College Yard& digging the cellar."At Harvard, the original college buildings formed a quadrangle. Visitor James Birket wrote that 1750 Harvard College at Cambridge, Massachusetts"Consists of three Separate Brick buildings...one of which is called Stoughton hall, And although the 2 wings do not Join to the Middle building yet they are So placed As to form a very handsom Area or Courtyardin the Middle." 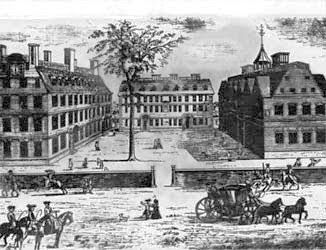 Ebenezer Hazard visited the college of William and Mary in Williamsburg, Virginia, in 1777, noting that"At this Front of the College is a large Court Yardornamented with Walks, Trees cut into different Forms, & Grass."

Court Yard at the College of William & Mary. Detail of Bodleian Plate England. 1740.

Moreau de St. Mery visited the College of New Jersey at Princeton, New Jersey in the 1790s wrote, "Before it is a huge front yardset off from the street by a brick wall, and at intervals along the wall are pilasters supporting wooden urns painted gray. This front yard is untidy, covered with the droppings of animals who come there to graze...Behind the college there is an extremely large courtyard. It is dirty and uncultivated, and everything in it is evidence of neglect."
College of New Jersey, Princeton. Court Yard in 1764.
at 4:00 AM