Colonial Williamsburg has cleared out the cows so its archaeologists can take a crack at Custis Square. The foundation hopes that underneath the grass its livestock has grazed on, it will find artifacts related to the volatile planter and one-time father-in-law to Martha Washington, John Custis IV. 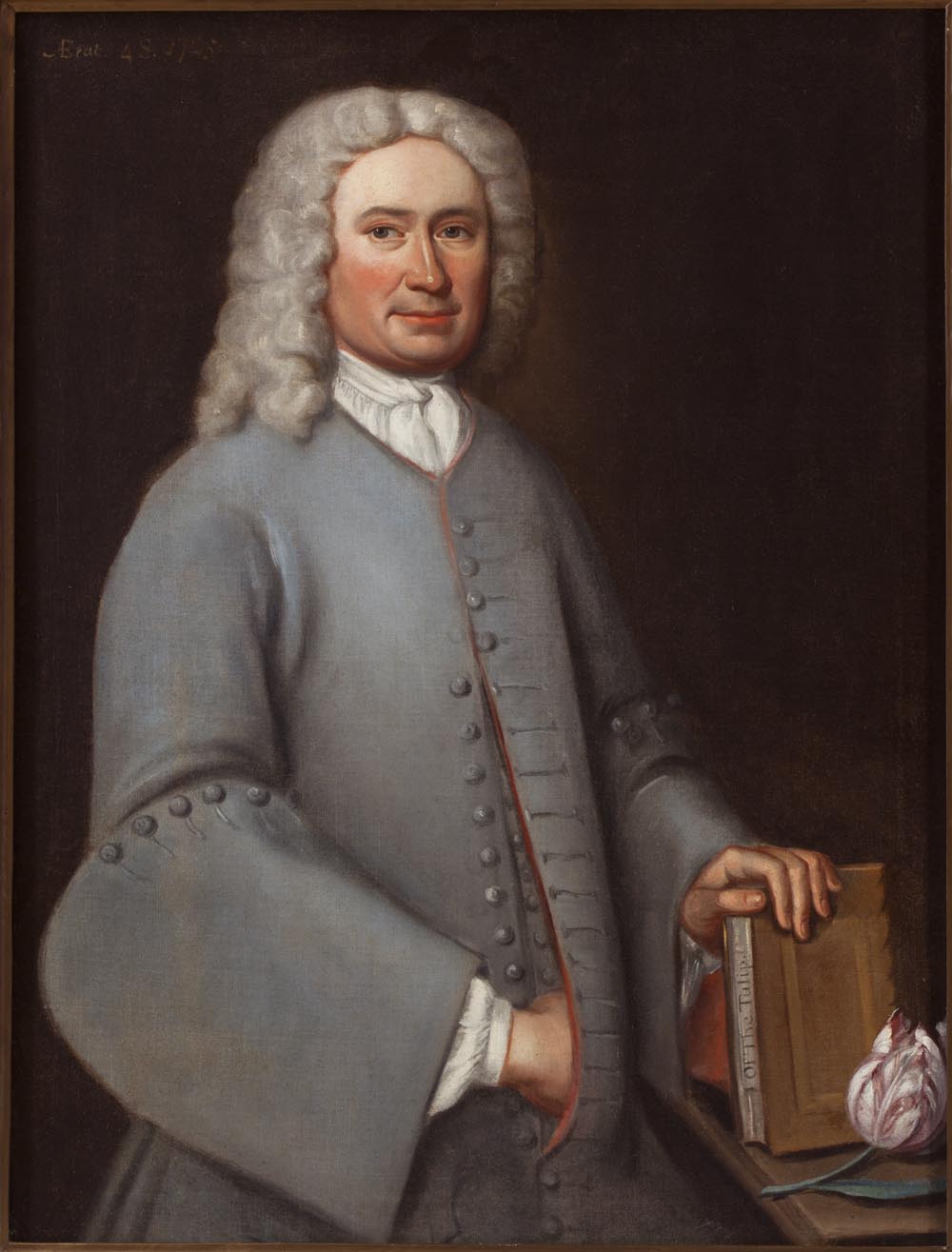 The foundation has launched a multi-year archaeological investigation at Custis’ home and gardens, known as Custis Square. Colonial Williamsburg hopes to learn more about Custis, the enslaved people who lived at the site and horticulture of the early 18th century at what is a major and mostly unexplored site.

“We’re thrilled to be able to do this. It’s one of the more important sites that has not been excavated at Colonial Williamsburg,” said Jack Gary, the foundation’s director of archaeology.

Gary spoke just a couple hours after the first shovelfuls of dirt were removed from the pasture Monday, which sits on top of the 4-acre Custis Square site. Around him were a handful of archaeologists digging, scraping and peering into a few 50-centimeter squares of exposed dirt arrayed in a grid and marked with tiny pink flags. Prior to the start of the excavation, livestock had grazed on the property; they will be moved to other pastures to make way for the dig.

By 1717, after buying the property a couple years earlier, Custis had built a house at the site, which is on Francis Street between the DeWitt Wallace Decorative Arts and the Abby Aldrich Rockefeller Folk Art museums and the Colonial Parkway.

In his personal letters of the time, Custis wrote of his budding interest in gardening. That interest would blossom into a passion.

Custis developed an elaborate garden for this property, one that was known even in England. Records show Custis ordered a range of plants from England and kept up a correspondence with notable naturalists. Historians believe the garden featured topiary, gravel paths and three statues, Gary said.

“This is a high-end garden being developed by an incredibly wealthy individual,” Gary said. The space is more than a collection of curated plants. It’s also a window into the development of an aspect of American culture, albeit gardening, and how English and African culture informed it.

There’s also a darker side of Custis Square. The wealthy garden enthusiast was a slave owner. Learning more about the lives of those enslaved people is also a priority of the project.

“This was a landscape of enslavement. There were enslaved people who worked on this property,” Gary said. “How did they transform this landscape? They were the ones building it and maintaining it.”

Custis owned almost 200 people when he died. While some lived and worked at Custis Square, most worked on his four plantations outside Williamsburg, according to a Colonial Williamsburg news release.

One phase of the project is excavation of outbuildings, with an emphasis on enslaved inhabitants of the site. The project will also conduct materials analysis and research Custis’ enslaved laborers to identify descendants, the release states.

Those efforts will be helped by the size of the site.

“Because it’s such a large lot, there may be more discreet places where enslaved people are living in their own quarters. Once we find those, that allows us to say ‘this stuff belonged to enslaved people as opposed to John Custis,’ ” Gary said.

Custis, who lived from 1678 to 1749, led a prominent family that initially settled on Virginia’s Eastern Shore in the mid-1600s. He moved to Williamsburg after his rocky marriage to Frances Parke Custis ended with her death by smallpox in 1715.

Insight into that tempestuous relationship can be found on Custis’ Eastern Shore grave, which reads in part, “Yet lived but Seven [sic] years which was the Space [sic] of time he kept a Batchelors [sic] House at Arlington on the Eastern Shoar [sic] of Virginia.”

In Williamsburg, Custis served on the royal Governor’s Council and had a falling out with Lt. Gov. Alexander Spotswood after Spotswood had trees felled near Custis Square to create a better view from the Governor’s Palace, the release states.

There’s also a connection to America’s first First Lady. Custis’ son by Frances Parke, Daniel Parke Custis, married one Martha Dandridge in 1750. He died in 1757. Martha Dandridge inherited Custis Square from her late husband and likely lived there before she married George Washington in 1759, Gary said.

In addition to politics and gardening, Custis was a savvy, perhaps even cutthroat, tobacco planter. Letters to merchants show a man willing to put pressure on business associates, Gary said.

Custis, at 61 years old, fathered a son named John by one of his enslaved women, Alice. Custis secured John’s freedom by petitioning the colonial government. Custis deeded John land in York County, as well as enslaved people including John’s mother and her other children, according to the release.

Custis was also interested in medicine and fancied himself an amateur physician. He developed his own medicinal remedies and created hundreds of recipes to cure everything from heartburn to deafness. He treated his slaves with his medicines and even provided his remedies to Williamsburg’s poor for free, Gary said.

“If they couldn’t go to a real doctor, they could come to John Custis and get free medicine,” Gary said. “He’s like all of us. He has multiple sides to him.”

Senior staff archeologist Mark Kostro examined a smattering of brick debris within one of the dig site’s small exploratory squares of excavated dirt on the chilly Monday afternoon.

There’s a method to the small squares that represent an initial foray into the site. In January, the team used ground-penetrating radar to identity anomalies in the dirt to follow up on with excavation.

“One of the things we do when you have a big landscape like this is try to narrow down where are the points of interests for us to do larger excavations,” Kostro said. “It gives us a window every 10 meters of the whole project area.”

The idea is to create this grid across the site to inform archaeologists where to concentrate the digging effort. Kostro gestured to another square, sans brick, closer to Francis Street.

“Right away, we’re seeing some differences even here,” he said, adding that the brick debris could be a pathway, building debris or a dumping ground.

In the years immediately after Custis’ death, the property housed trade and residential tenants. The building currently on the site was built by James McClurg in the early 1800s and is known as the Custis Kitchen. In 1851, the property was purchased by Eastern State Hospital, according to the release.

In the 1960s, Colonial Williamsburg excavated the foundation of John Custis IV's residence at Custis Square. In the 1960s, the focus was on finding buildings, and only a small portion of the site was explored. This time, Colonial Williamsburg will examine the entire property. The foundation waited about 50 years because the technology and techniques didn’t exist yet to thoroughly study the garden areas. Now, they do.

“Well, we’ve finally reached that point. The future is now,” Gary said. “We’re at a point where we feel confident we can tackle this site and do it the justice it deserves.” Now there’s the means to extract centuries-old pollen from soil and mortar to identify what kind of plants grew in the area, as well the ability to conduct chemical studies of the soil, Gary said.

That means the team is in a better position than its predecessors to figure out which herbs the medicine man may have grown in the garden. Finding evidence of those plants can be compared with Custis’ documents to confirm and expand on what historians know.

“We can check what we find archeologically against what we see in the documentary record and fill in the gaps with the two sources of data,” Gary said.

You’ll see folks digging around at the site for the next few years. The project kicks off with site mapping, surveying and excavation of the kitchen this year. Garden excavation, materials analysis and research of Custis’ enslaved laborers to identify descendants is slated for 2020-2021. After that comes open excavation of the outbuildings, with a focus on enslaved inhabitants at the site (2022-2023) and then cataloging and reporting in 2024-2025, according to the release.

In time, the project site will be open to the public, so visitors can follow along with discoveries made at the site. The plan is that by the fall, there will be formal tours open to guests, Gary said.

“More than 90 years after its establishment, Colonial Williamsburg continues to pursue a fuller understanding of 18th-century America, its people and their culture in order to tell our shared American story more fully,” Colonial Williamsburg President and CEO Mitchell Reiss said in the release.
at 4:30 AM