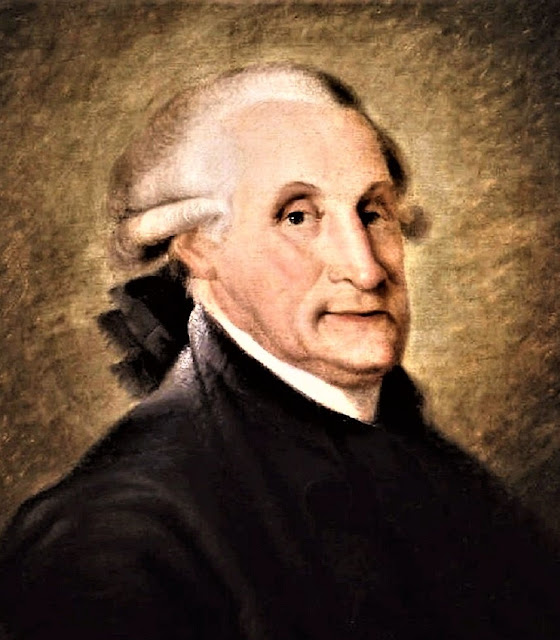 Interest in the potential of the American colonies producing a great new wine was growing in London by the middle of the 18C.  Beginning in 1758, the Society of Arts had been offering premiums for wines produced in the colonies. (see: Robert Dossie, Memoirs of Agriculture, and other Œconomical Arts, i (London, 1768), 239–41.)  George Washington hoped that native grapes growing vigorously across the British American colonies could be made into a notable native American wine: "The spontaneous growth of the Vine in all parts of this Country; the different qualities of them and periods for maturation, led me to conclude that by a happy choice of the species I might succeed better than those who had attempted the foreign vine," Washington wrote to the French Minister of State, Chre'tien Guillaume de Lamoignon de Malesherbes, on July 9, 1783.  But dreams of Independence, a Revolution, & forming a new government intervened.. "This consideration led me to try the wild grape of the Country; and to fix upon the species which I have already described, and which in the Eight years I have been absent from my estate has been little attended to. Had I remained at home, I should 'ere this, have perfected the experiment which was all I had in view," Washington lamented.  Dreams of wine-making in the New World of North America began long before the time of Washington. The colonists of Jamestown started crushing New World "fox grapes" almost from the moment they landed in 1607. 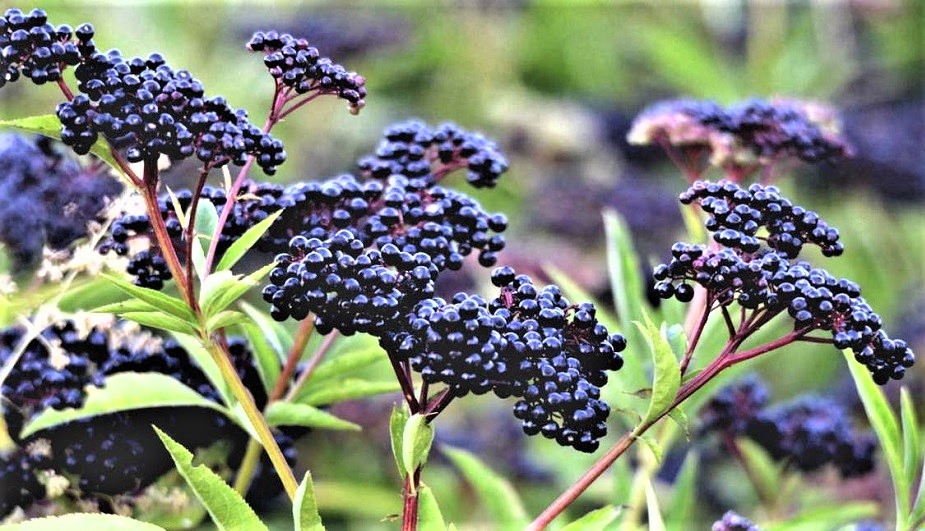 CAUTION: In all species of elderberries, the stems, leaves, bark and especially the roots are toxic; the latter are known to have caused death to rooting animals such as swine. All immature (green) berries are considered toxic, and one American species, the American Red, or Scarlet, Elder (S. pubens) produces a mature toxic berry. While the berries of many species induce stomach upset if eaten raw or in excess, the American Red Elder is excessively toxic and should be avoided. (Its mature berries are very small — about 1/5 inch in diameter — obviously red and its juice yellowish.) The identified toxin is a cyanogenic glycoside (releases cyanide) called sambunigrin.


Old-Time Recipes for Home Made Wines Cordials and Liqueurs (1922) by Helen S. Wright

ELDER WINE
Take five pounds of Malaga raisins, rub them and shred them small; then take one gallon of water, boil it an hour, and let it stand till it is but blood-warm; then put it in an earthen crock or tub, with your raisins. Let them steep ten days, stirring them once or twice a day; then pass the liquor through a hair sieve, and have in readiness one pint of the juice of elderberries drawn off as you do for jelly of currants; then mix it cold with the liquor, stir it well together, put it into a vessel, and let it stand in a warm place. When it has done working, stop it close. Bottle it about Candlemas. (Candlemas in early February,  is another name for the feast of the Presentation of the Lord. Forty days after His birth, Mary and Joseph brought Jesus to the temple for the rites of purification and dedication as prescribed by the Torah.)

ELDERBERRY WINE
Nine quarts elderberry juice, nine quarts water, eleven and one-half pounds white sugar, two ounces red tartar. These are put into a cask, a little yeast added, and the whole is fermented. When undergoing fermentation, one ounce ginger root, one ounce allspice, one-quarter ounce cloves are put into a bag of clean cotton cloth, and suspended in the cask. They will give a pleasant flavor to the wine, which will become clear in about two months, and may be drawn off and bottled. Add some brandy to this wine, but if the fermentation is properly conducted, this is not necessary.

ELDER WINE, NO. 2
Take spring-water, and let it boil half an hour; then measure two and one-half gallons, and let it stand to cool. Then have in readiness ten pounds of raisins of the sun well picked and rubbed in a cloth, and hack them so as to cut them, but not too small; then put them in, the water being cold, and let them stand nine days, stirring them two or three times a day. Then have ready three pints of the juice of elderberries full ripe, which must be infused in boiling water, or baked three hours; then strain out the raisins, and when the elder liquor is cold, mix that with it, but it is best to boil up the juice to a syrup, one-half pound of sugar to every pint of juice. Boil and skim it, and when cold mix it with your raisin liquor, and two or three spoonfuls of good ale yeast. Stir it well together; then put it into a vessel fit for it, let it stand in a warm place to work, and in your cellar five or six months.

ELDER WINE, NO. 3
The quantity of fruit required is one gallon of ripe elderberries, and one quart of damsons or sloes, for every two gallons of wine to be produced. Boil them in water till the damsons burst, frequently breaking them with a flat stick; then strain and return the liquor to the copper. The quantity of liquor required for nine gallons of wine will be ten gallons; therefore if the first liquor proves short of this, add water to the pulp, rub it about and strain to the rest. Boil two hours with twenty-three pounds of coarse moist sugar; three-quarters of a pound of ginger bruised, one-half a pound of allspice, and one ounce of cinnamon, loosely tied in a muslin bag, and two or three ounces of hops. When quite cool work on the foregoing plan, tun in two days, drop in the spice, and suspend the bag by a string not long enough to let it touch the bottom of the cask; fill it up for a fortnight, then paste over stiff brown paper. It will be fit to tap in two months; will keep for years, but does not improve by age like many other wines. It is never better than in the first year of its age.

ELDER WINE (FLAVORED WITH HOPS)
The berries, which must be thoroughly ripe, are to be stripped from the stalk, and squeezed to a pulp. Stir and squeeze this pulp every day for four days; then separate the juice from the pulp by passing through a cane sieve or basket. To every gallon of juice, add one-half gallon of cold water. Boil four and one-half gallons with three ounces of hops for one-half hour; then strain it and boil again, with one and one-half pounds of sugar to the gallon, for about ten minutes, skimming all the time; pour it into a cooler, and, while luke-warm, put a piece of bread with a little balm on it to set it working. Put it into a cask as soon as cold; when it has done working, cork it down, and leave it six months before it is tapped. It is then drinkable, but improves with age exceedingly.

ELDER WINE -  CHRISTMAS
Take five pounds of Malaga or Lipara raisins, rub them clean, and shred them small. Then take five quarts of water, boil it an hour, and when it is near cold put it in a tub with the raisins; let them steep ten days, and stir them once or twice a day. Then strain it through a hair sieve, and by infusion draw one pint of elder-juice, and one-quarter of a pint of damson juice. Make the juice into a thin syrup, a pound of sugar to a pint of juice, and not boil it much, but just enough to keep. When you have strained out the raisin liquor, put that and the syrup into a vessel fit for it, and one-half a pound of sugar. Stop the bung with a cork till it gathers to a head, then open it, and let it stand till it has done working; then put the cork in again, and stop it very close, and let it stand in a warm place two or three months, and then bottle it. Make the elder and damson juice into syrup in its season, and keep it in a cool cellar till you have convenience to make the wine.

ELDER-FLOWER WATER
Take two large handfuls of dried elder-flowers, and ten gallons of spring-water; boil the water, and pour it scalding hot upon the flowers. The next day put to every gallon of water five pounds of Malaga raisins, the stalks being first picked off, but not washed; chop them grossly with a chopping-knife, then put them into your boiled water, and stir the water, raisins, and flowers well together, and so do twice a day for twelve days. Then press out the juice clear, as long as you can get any liquor out. Then put it in your barrel fit for it, and stop it up two or three days till it works, and in a few days stop it up close, and let it stand two or three months, till it is clear; then bottle it.

CYPRESS WINE - IMITATION
To five gallons of water put five quarts of the juice of white elderberries, pressed gently through a sieve without bruising the seeds. Add to every gallon of liquor one and one-half pounds of sugar, and to the whole quantity one ounce of sliced ginger, and one-half ounce of cloves. Boil this nearly an hour, taking off the scum as it rises, and pour in an open tub to cool. Work it with ale yeast spread upon a toast of bread for three days. Then turn it into a vessel that will just hold it, adding about three-quarters pound bruised raisins, to lie in the liquor till drawn off, which should not be done till the wine is fine.