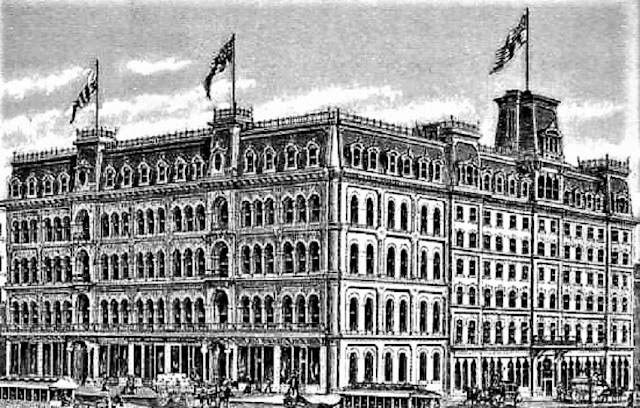 As streets took the place of grand courtyards, Baltimore's Indian Queen Hotel came to sit on the- Southeast corner of Hanover and Baltimore Streets.  The Star Spangled Banner was composed at this hotel.

Englishman Thomas Twining visited Baltimore, Maryland, in 1787. "We drove in good style into the court-yard of the 'Indian Queen,' a large inn of very respectable appearance...and was shown into the largest room I had ever seen in any hotel even in England. It extended the whole depth of the house, from Queen Street to the great court-yard...At four o'clock we drove into the great yard of the Indian Queen."

The Indian Queen is connected with the story of Francis Scott Key who was trapped in the Baltimore Harbor during the War of 1812 British attack on Fort McHenry. He and John Skinner had just secured the release of American Dr. William Beanes, who had been arrested by the British after the burning of Washington. Recognizing the group knew too much of the British plan of attack, they weren't allowed to head to shore until after the Baltimore bombardment was complete.
For the next 24 hours, Key and his party watched and waited through smoke, rain, and fear. As the smoke cleared and the shelling ended on the morning of September 14th, Key saw the American flag still waving and was moved by the scene. He quickly jotted down his thoughts "in the fervor of the moment," as he told his brother-in-law, Roger Brooke Taney. He and his party were released on September 16th; and Key made his way to Indian Queen Hotel, located at the corner of Hanover and Baltimore Streets in Baltimore. 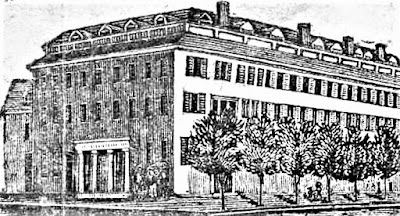 Another 19C view of The Indian Queen Hotel in Baltimore

It at this hotel, that Francis Scott Key found a bed for the night after arriving on land on September 16th. In his room, he compiled all of his notes and finished writing out his 4 verses. The lyrics were published the next day with no title, but it was soon given one by a friend: Defence of Fort McHenry. It was noted that the lyrics could be sung to the music of a well-known British club song called "Anacreon in Heaven." 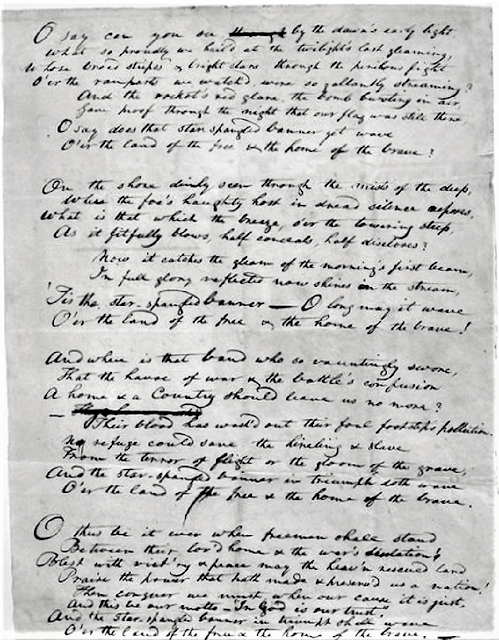 Key's manuscript, from the Maryland Historical Society
John Gadsby arrived in Baltimore in the fall of 1808, when he took over management of the Indian Queen Hotel, located at the corner of Hanover and Baltimore Streets. Gadsby introduced new features to the business, including a mechanically powered coffee roaster, reading room, and public baths. The operation was large and Gadsby owned 42 slaves, most of whom worked at the hotel. In 1827, The Baltimore Gazette recognized Gadsby as "the first man who introduced the proper style and taste for public entertainments in this city."

On September 29, 1809, traveler Samuel Breck stopped in Baltimore and stayed at the Indian Queen, observing: “We alighted at the Indian Queen in Market street, kept by John Gadsby in a style exceeding anything that I recollect to have seen in Europe or America. This inn is so capacious that it accommodates two hundred lodgers, and has two splendid billiard-rooms, large stables and many other appendages. The numerous bed-chambers have all bells, and the servants are more attentive than in any public or private house I ever knew.” 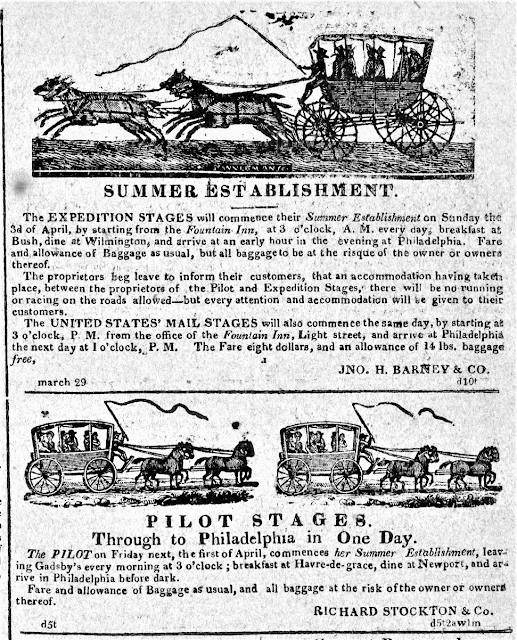