From The Washington Post by Adrian Higgins, Published: May 29, 2011 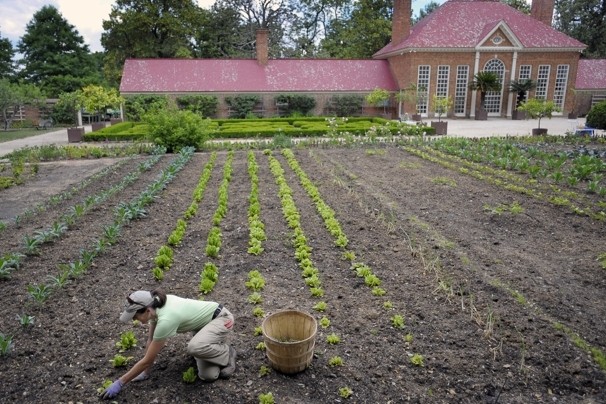 "Ellen Epstein has stopped to smell the sweet williams in the Upper Garden at Mount Vernon. The art appraiser from Katonah, N.Y., has been to George Washington’s riverside home several times, but not for at least 10 years, and the place has changed somehow. “I remember this garden wasn’t like this at all,” she said, looking up to take in the walled one-acre landscape.

"As she surveys the fruit orchard, boxwood parterres and flower borders, a couple of gardeners plant clumps of golden-flowered calendulas near the grapevine trellises. They are putting the final touches on a fundamental reworking of Washington’s pleasure garden. Begun last August and now virtually complete, the new garden re-creates what experts believe is a far closer representation of the one Washington knew in the late 18th century.

"Gone is the tall boxwood edging, along with the crescent flower beds at the apex of the garden. The paths are wider, the garden beds fewer but much larger. Bands of decorative plants wrap around what is essentially a vegetable garden — the area devoted to veggies has grown fivefold and occupies a quarter of the space. Even though the “high garden” was the landscape jewel of the estate, Washington “wasn’t about to let something beautiful take away from something that was necessary,” said Dean Norton, Mount Vernon’s director of horticulture.

"Spring visitors such as Epstein are noticing the transformation of the Upper Garden, which is now less mannered but more striking. “One of the biggest shocks is the lack of boxwood, but the openness, they’re overwhelmed by it,” said Norton, standing on one of the new 10-foot-wide gravel paths.

"For a century until the 1980s, George and Martha Washington’s status garden featured old, billowing English boxwood — long assumed to date to the Washingtons’ time — and a pair of formal rose gardens. It became as increasingly untenable as the idea that young George could not tell a lie — hybrid tea roses did not appear until the 1860s, and the boxwood, once the rings were counted, turned out to be not much older. Washington died at Mount Vernon in 1799, his widow in 1802.

"The garden was redesigned 26 years ago in what was thought to be a much more authentic fashion. The rose beds were removed, but the crescent beds retained and more paths added, creating additional, small flower beds. “What was missing from that restoration was physical evidence for what the garden would have looked like,” said Esther White, Mount Vernon’s director of archaeology. “We knew the roses were wrong.” The changes had to accommodate the sacred but ailing and, as it turned out, unoriginal boxwood.

"Six years ago, with the boxwood well on their way out, White got permission to conduct a winter dig of the garden. In a small section near the north entrance, the excavation revealed more than expected in what had been a historically unyielding site and led to a four-month dig the next year in more clement weather.

"The 15-member archaeology team hit pay dirt, discovering what turned out to be Washington’s first known use of this site, as a nursery for holding fruit trees in the 1760s. With an additional 13 months of digs between 2008 and last year, White and her team found a total of six garden iterations on the site and were able to piece together the layout for the walled, bullet-shaped pleasure garden that was first mapped in the 1780s.

"Years ago, Norton thought this plan, by Samuel Vaughan, only depicted the Upper Garden as it looked when it was first built, before Washington embellished it. Now, he realizes, Vaughan was telling us what the garden looked like pretty much fully formed.

"In rebuilding the garden — the construction took place between August and November — crews brought in 350 cubic yards of soil and compost. Bulbs were planted in late 2010, the remaining plantings this spring. Eight mature apple, pear and cherry trees were moved to the orchard bed.

"In late spring, the beds of decorative plants feature a mixture of all sorts of heirloom plants — bulbs, annuals, perennials, biennials, shrubs and roses. The gardeners have planted vegetables in strict rows, including peas, beans, beets, lettuce, potatoes, spinach and lots of cabbage-family plants.

"Washington mentioned very few ornamental plants in his writings, but his gardener’s weekly reports left a trove of information about what was being planted and, often, where.

"Which raises the question: Why weren’t these detailed reports used earlier to fashion the Upper Garden? The answer, of course, is that while the new garden speaks to Washington the man, the previous, embroidered versions told of Washington the myth. (The Upper Garden’s twin, the Lower Garden, remains an idealized Colonial Revival fruit and vegetable garden.)

“The [Upper] Garden became a reflection of everything we in the 19th and 20th century think about Washington, this romanticized view of the 18th-century man, strolling his pleasure garden, taking in the colors, the fragrances,” White said. “It’s our projection. One of the things the project did was to make people wipe clean their idea of what the garden should be. We all started again.”

"The plant varieties and the medley of ornamentals around the vegetables seem alien and constrained to the modern gardener, but in Washington’s day, the Upper Garden was a horticultural spectacle and undoubtedly impressed the many visitors that the Washingtons entertained.

"Among wealthy, important plantation owners in Virginia and Maryland, such gardens were a display of status. “It’s something you did with surplus people and time,” said Barbara Heath, a professor of archaeology at the University of Tennessee and adviser for the project. “Most people couldn’t afford the time or the labor or had the knowledge to create a great garden. It was the elite who used the landscape to say, ‘This is who we are.’

For Epstein and her friend Oudia Felker, the strange old garden — stripped of its romantic flourish — is perfect.

“This is magnificent,” said Felker, of Venice, Fla. “Can you imagine never knowing how many people you’re going to have for dinner and being able to pick enough to accommodate 16, 20 people?” she said.