How Geo Washington dealt with a 1780 PA law of Gradual Abolition to keep his Enslaved Cook, 1797
Only a few of Early America's slave chefs went on to receive the acclaim many of them deserved.  One of them was George Washington's chef, Hercules.  Here is another of the articles written about him. 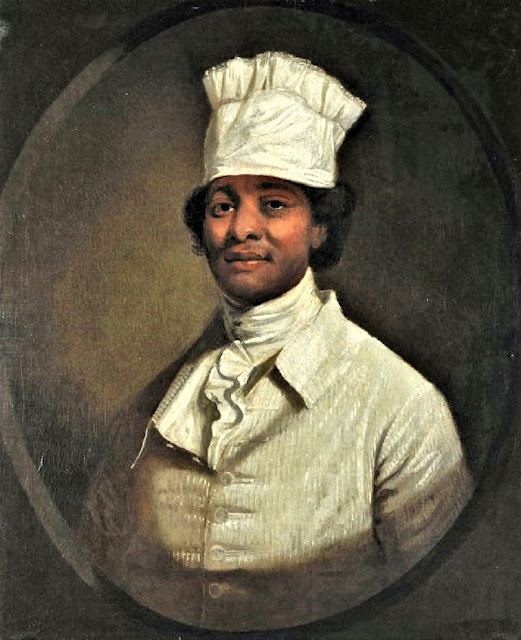 Once thought to be a Portrait of Chef Hercules who was an enslaved African held at Mount Vernon, George Washington's Virginia plantation on the Potomac River.  He was sold to George Washington as a teenage “ferryman” in 1767 by a neighbor, John Posey, as payment for a debt.  He was the head cook at the mansion in the 1780s, cooking for the Washington family and their guests. Hercules was one of two cooks listed in the 1786 Mount Vernon Slave Census.
After he became President of the United States, Washington was dissatisfied with the cook in the presidential residences in New York City, and brought Hercules to Philadelphia (then the national capital) in November 1790, to cook in the kitchen of the President's House. Hercules escaped to freedom from Mount Vernon in 1797, and later was legally manumitted under the terms of Washington's Will.

Hercules took Alice, one of Martha Washington's "dower" slaves, as his wife, and they had three children: Richmond (born 1777), Evey (born 1782), and Delia (born 1785). He, his wife, and the three children were listed in the February 1786 Mount Vernon Slave Census, which records him as one of two cooks in the Mansion House. Alice died in 1787.

He was one of nine enslaved Africans brought to Philadelphia in 1790 by Washington to work in the presidential household. The others were his son Richmond (then 13 years old), Oney Judge, Moll, Austin, Christopher Sheels, Giles, Paris, and Joe (Richardson). 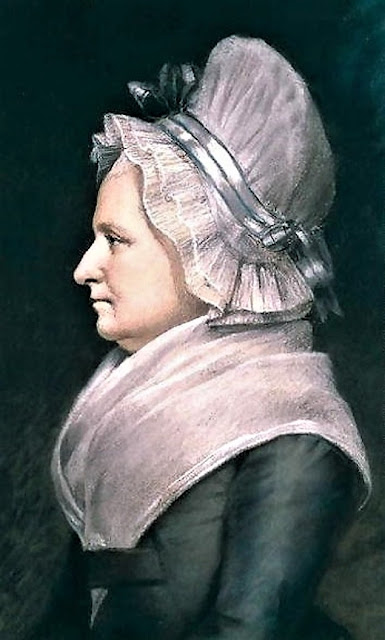 1796 James Sharples (1751-1811). Martha Dandridge Custis Washington (1731-1802)
In the memoirs of G.W.P. Custis, Martha Washington's grandson, Hercules was recalled as "a celebrated artiste ... as highly accomplished a proficient in the culinary art as could be found in the United States." The cook was given the privilege of selling the extra food from the Philadelphia kitchen, which by Custis's estimate earned him nearly $200 a year, the annual salary of a hired cook. According to Custis, Hercules was a dapper dresser and was given freedom to walk about in the city.

Pennsylvania passed a gradual abolition law in 1780, which prohibited non-residents from holding slaves in the state longer than six months. If held beyond that period, the state's Gradual Abolition Act gave slaves the legal power to free themselves. Members of Congress were specifically exempted from the act. Officers of the executive and judicial branches of the federal government were not mentioned since those branches didn't exist until the U.S. Constitution was ratified in 1788.

When the national capital moved Philadelphia in 1790, there was a question about whether the state law would apply to federal officials. Washington argued that he was a citizen of Virginia, that his presence in Pennsylvania was solely a consequence of Philadelphia's being the temporary national capital, and that the state law should not apply to him. Rather than challenging the state law in court, Washington took the advice of his attorney general, Edmund Randolph, and systematically rotated the President's House slaves in and out of the state to prevent their establishing a six-month continuous residency. This rotation was itself a violation of Pennsylvania law, but no one challenged the President's actions. The U.S. Supreme Court later found Pennsylvania's 1788 amendment to the Gradual Abolition Act to be unconstitutional in Prigg v. Pennsylvania.

In reality, Washington left Hercules behind at Mount Vernon, when he returned to Philadelphia after Christmas 1796. The historian Anna Coxe Toogood found that the Mount Vernon farm records listed Hercules and Richmond at the plantation during the winter of 1796-97, where they were assigned as laborers, along with other domestic servants, to pulverize stone, dig brick clay, and grub out honeysuckle.

Hercules escaped to freedom from Mount Vernon, on February 22, 1797 – Washington's 65th birthday – which the president celebrated in Philadelphia. An entry in that week's Mount Vernon farm report noted that Hercules "absconded 4 [days ago]."

Louis-Philippe, the future king of the French, visited Mount Vernon in the spring of 1797. According to his April 5 diary entry: The general's cook ran away, being now in Philadelphia, and left a little daughter of six at Mount Vernon. Beaudoin ventured that the little girl must be deeply upset that she would never see her father again; she answered, "Oh! Sir, I am very glad, because he is free now."

Hercules remained in hiding. In 1798, the former-President's House steward, Frederick Kitt, informed Washington that the fugitive was living in Philadelphia: "Since your departure I have been making distant enquiries about Herculas but did not till about four weeks ago hear anything of him and that was only that [he] was in town neither do I yet know where he is, and that it will be very difficult to find out in the secret manner necessary to be observed on the occasion."

Because Alice had been a "dower" slave – owned by the estate of Martha Washington's first husband, Daniel Parke Custis – the children of Hercules and his wife were legally property of the Custis Estate. The children remained enslaved and were among the "dowers" divided among Martha Washington's four grandchildren following her 1802 death.

Read more about Hercules & the Washingtons  at The Digital Encyclopedia of George Washington by Mary V. Thompson.
at 4:00 AM