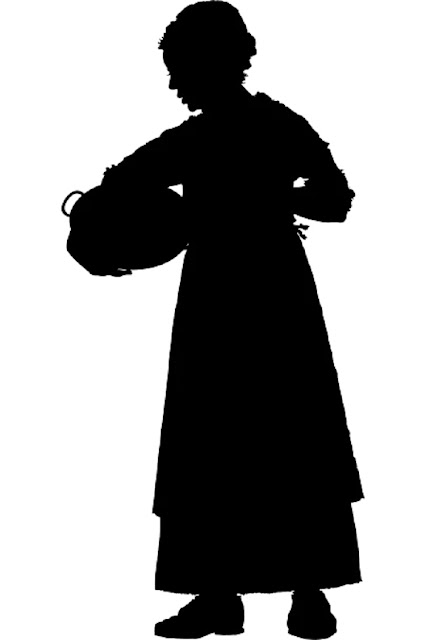 A silhouette of Doll, from Lives Bound Together. Mount Vernon explains that at the time of George Washington’s death, the Mount Vernon estate’s enslaved population consisted of 317 people. These silhouettes are meant to represent people in bondage at Washington's Mount Vernon. The designs were based on physical descriptions (which survive for only a few) & each person’s age, gender, clothing, & work assignment.

Geo Washington's Favorite Food from the Gardens - Corn for Hoecakes

Family members and visitors alike testified that hoecakes were among George Washington’s favorite foods. He invariably ate them at breakfast, covered with butter and honey, along with hot tea—a “temperate repast” enjoyed each morning. Samuel Stearns (1741-1810), was an American doctor, who wrote that Washington "breakfasts about seven o'clock on three small Indian hoe-cakes, and as many dishes of tea."

Years after Washington’s death, Nelly Custis Lewis described her method for preparing a yeast-risen version of hoecakes in a letter to her close friend Elizabeth Bordley Gibson. “Make it by candlelight,” she wrote, “& let it remain [by a warm hearth] until the next morning.” Describing the baking method, she wrote: “[D]rop [the batter] a spoonful at a time on a hoe or griddle (as we say in the South). When done on one side turn the other—the griddle must be rubbed . . . with a piece of beef suet.”

Melted butter for drizzling and serving

Honey or maple syrup for serving

Mix the yeast and 1 1/4 cups of the cornmeal in a large bowl. Add 1 cup of the lukewarm water, stirring to combine thoroughly. Mix in 1/2 cup more of the water, if needed, to give the mixture the consistency of pancake batter. Cover with plastic wrap, and refrigerate for at least 8 hours, or overnight.

When ready to finish the hoecakes, begin by adding 1/2 to 1 cup of the remaining water to the batter. Stir in the salt and the egg, blending thoroughly.

Gradually add the remaining 1 1/4 cups of cornmeal, alternating with enough additional lukewarm water to make a mixture that is the consistency of waffle batter. Cover with a towel, and set aside at room temperature for 15 to 20 minutes.

Heat a griddle on medium-high heat, and lightly grease it with lard or vegetable shortening. Preparing 1 hoecake at a time, drop a scant 1/4 cup of the batter onto the griddle and cook on one side for about 5 minutes, or until lightly browned. With a spatula, turn the hoecake over and continue cooking another 4 to 5 minutes, until browned.

Place the hoecake on a platter, and set it in the oven to keep warm while making the rest of the batch. Drizzle each batch with melted butter.

Serve the hoecakes warm, drizzled with melted butter and honey or maple syrup.

Doll was thirty-eight years old when she arrived at Mount Vernon in 1759. She and her children were among the more than 80 enslaved people whom Martha Dandridge Custis brought to her marriage to George Washington, as part of her “dower” or widow’s share of her first husband’s estate. Many of the “dower” slaves remained on Custis properties, but about 20 household workers and craftsmen were taken to Mount Vernon from their previous home in New Kent County, Virginia.1 Doll and the other people forced to move had to adjust to a new life—and a new community—on Washington’s plantation.

As the estate’s cook for many years, Doll worked long hours in the kitchen preparing the hoecakes, smoked hams, and other Washington family favorites. It is likely that Martha Washington installed Doll as cook because she was familiar with the enslaved woman’s skills. Mount Vernon’s steady stream of visitors meant that Doll frequently had to prepare large and elaborate meals. She would have worked closely with Martha to plan each day’s menu and monitor ingredients. Though under her mistress’s supervision, the kitchen was Doll’s domain. She passed on her expertise to her daughter Lucy, who succeeded her mother as one of the estate’s cooks.

By the 1780s, Doll no longer had a formal work assignment.2 Then in her sixties, she likely assisted with knitting and mending, tasks that Washington often assigned to elderly enslaved workers. She continued to use the kitchen to distill garden rose and mint water for medicinal purposes and to dry garden fruits such as cherries.3 She also sold chickens and ducks to George Washington, as did many enslaved people on the estate.

Doll was the matriarch of one of the largest extended families within Mount Vernon’s enslaved community. In 1799 she had five children—George, Doll, Lucy, Peter, and Alce—as well as fourteen grandchildren and at least four great-grandchildren living on the estate. Her daughter Lucy married Frank Lee, the enslaved butler. Her grandson Christopher Sheels became Washington’s personal valet.

Because she was owned by the Custis estate, Doll remained enslaved after Martha Washington’s death. She may have been inherited by Elizabeth (Eliza) Parke Custis Law or George Washington Parke Custis.4 On the list of the division of the enslaved people owned by the Custis estate, both inherited a “Doll” or “Dolly” valued at just $5, a low figure indicating that the women were elderly.5 By 1802 Doll would have been eighty-one years old.

4. Doll was a common name among enslaved women, making it difficult to track her fate.

All this research plus images & much more is directly from the Mount Vernon website - to begin exploring, just click on the highlighted segment titles above.