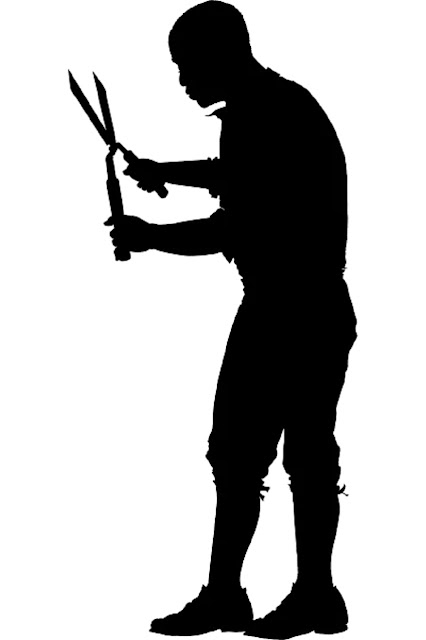 Mount Vernon explains that at the time of George Washington’s death, the Mount Vernon estate’s enslaved population consisted of 317 people. These silhouettes are meant to represent people in bondage at Washington's Mount Vernon. The designs were based on physical descriptions (which survive for only a few) & each person’s age, gender, clothing, & work assignment.

The week of August 12, 1798, was a sweltering one at Mount Vernon. The mercury of Washington’s thermometer flirted with ninety degrees nearly every day. Ominous clouds roiled the sky each afternoon, but fitful rain showers did little to break the heat. Despite the oppressive conditions, business continued as usual among Mount Vernon’s enslaved workers, including the three gardeners: George, Harry, and Joseph.1

Working under William Spence, an English hired gardener who had arrived at Mount Vernon ten months earlier, the three men toiled in the heat, weeding and planting strawberries in the vineyard enclosure, sowing seeds for spinach and other greens in the kitchen garden, and pruning plantings, harvesting cabbage, and transplanting orange trees in the ornamental upper garden.2

George Washington used enslaved labor to make his vision for Mount Vernon’s landscape a reality. Among those who performed this labor was a man who shared his master’s name. George worked as a ditcher and later a gardener on Mansion House Farm. In the 1780s he was likely among those whom Washington directed to create paths, move and level earth, build walls, sow and cut grass, crush gravel, and transplant groves of trees to realize his plans for an elegant country estate. By the 1790s George was consistently working in Mount Vernon’s gardens.

George first came to Mount Vernon in the 1770s. He was owned by Washington’s mother, Mary Ball Washington, who lived in Fredericksburg, Virginia. For a decade, Washington rented him, paying his mother for the use of the young man’s labor. While living at Mount Vernon, George married Sall Twine, a field-worker who worked Dogue Run Farm. She was owned by the estate of Martha Washington's first husband. By 1786 the couple had three children together.

All enslaved people lived with the knowledge that they could be separated from family at any time, but George’s position since he was rented was especially tenuous. In 1787 Washington wrote to his mother that he hoped to stop hiring any of her enslaved workers except for George, who, Washington wrote, “will not, as he has formed connections in this neighborhood, leave it, as experience has proved him I will hire.”3 By this point, Washington’s moral qualms made him reluctant to separate enslaved families, and so he acquiesced to George’s request.

When she died in 1789, Mary Ball Washington left her “Negroe Boy George” to her eldest son in her will, ensuring that George and Sall’s family would stay together, at least temporarily.4 Proximity was relative, however. Because George was stationed at Mansion House Farm and Sall was a field-worker at Dogue Run, the couple lived apart during the week. George was allowed to visit his wife and children on Sundays.

The couple went on to have seven children: Jesse, Kate, Lawrence, Barbary, Abbay, Hannah, and George. After Washington’s death and his will was carried out, the elder George became a free man. His fate is unknown. However, since Sall Twine was not owned by Washington, she and their children remained enslaved. Their oldest daughter, eighteen-year-old Kate, may be the “Kitty” who was valued at £80 and inherited by Nelly Parke Custis Lewis at Woodlawn. Sall Twine and their four youngest children were inherited by Martha Parke Custis Peter and likely sent to one of the Peters’ farms in Maryland. Barbary was assigned to work as housemaid at Tudor Place, the Peters’ urban residence in Georgetown. According to her family history, she deliberately misbehaved so she could be sent back to the farm—perhaps to see her relatives. Barbary’s daughter Hannah later served as a nanny to the Peter children. George and Sall Twine’s youngest child, George, may have been among the enslaved laborers stationed at a quarry in Seneca, Maryland, owned by John Parke Custis Peter (Martha Peter’s eldest son). In 1847, the quarry supplied red sandstone for the Smithsonian Institution Building, now known as “The Castle.”5

Research plus images & much more are available at the Mount Vernon website, MountVernon.org - to begin exploring, just click the highlighted title above.