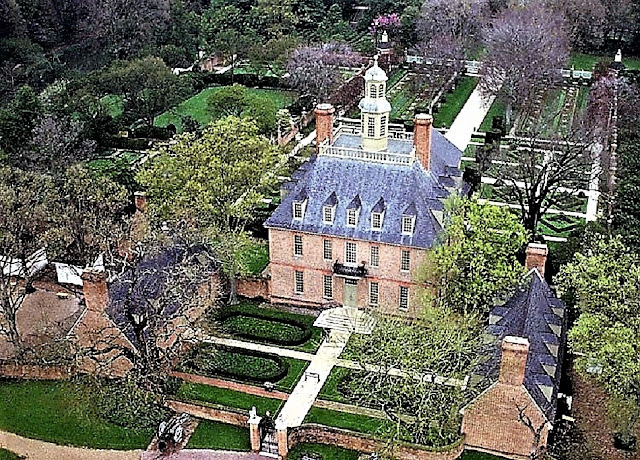 Public Yard - Courtyard at Governor's House
Governor's Palace in Williamsburg, Virginia was home to 7 royal governors, Patrick Henry and Thomas Jefferson. A professor from the College of William and Mary sketched a Williamsburg vista in a book published in 1724, when the city was just 25 years old. "From the Church," he said, "runs a Street northward called Palace Street; at the other end of which stands the Palace or Governor's House, a magnificent Structure built at the publick Expense, finished and beautified with Gates, Fine Gardens, Offices, Walks, a fine Canal, Orchards, &c." The Governor’s Palace was new then. It had been finished in 1722, after 16 years of fitful building and mounting expense.

Governor Edward Nott persuaded the General Assembly to authorize its construction with an act passed October 23, 1705, and building began the following summer. In 1706, the act of the Virginia legislature authorizing the building of the Governor's Palace allocated 635 pounds for the construction of the garden with these instructions, "that a Court-Yard, of dimensions proportionable to the said house, be laid out, levelled and encompassed with a brick wall 4 feet high with the balustrades of wood thereupon, on the said land, and that a Garden of the length of 254 foot and the breadth of 144 foot from out to out, adjoining to the said house, to be laid out and levelled and enclosed with a brick wall, 4 feet high, with ballsutrades of wood upon the said wall, and that handsome gates be made to the said court-yard and garden." 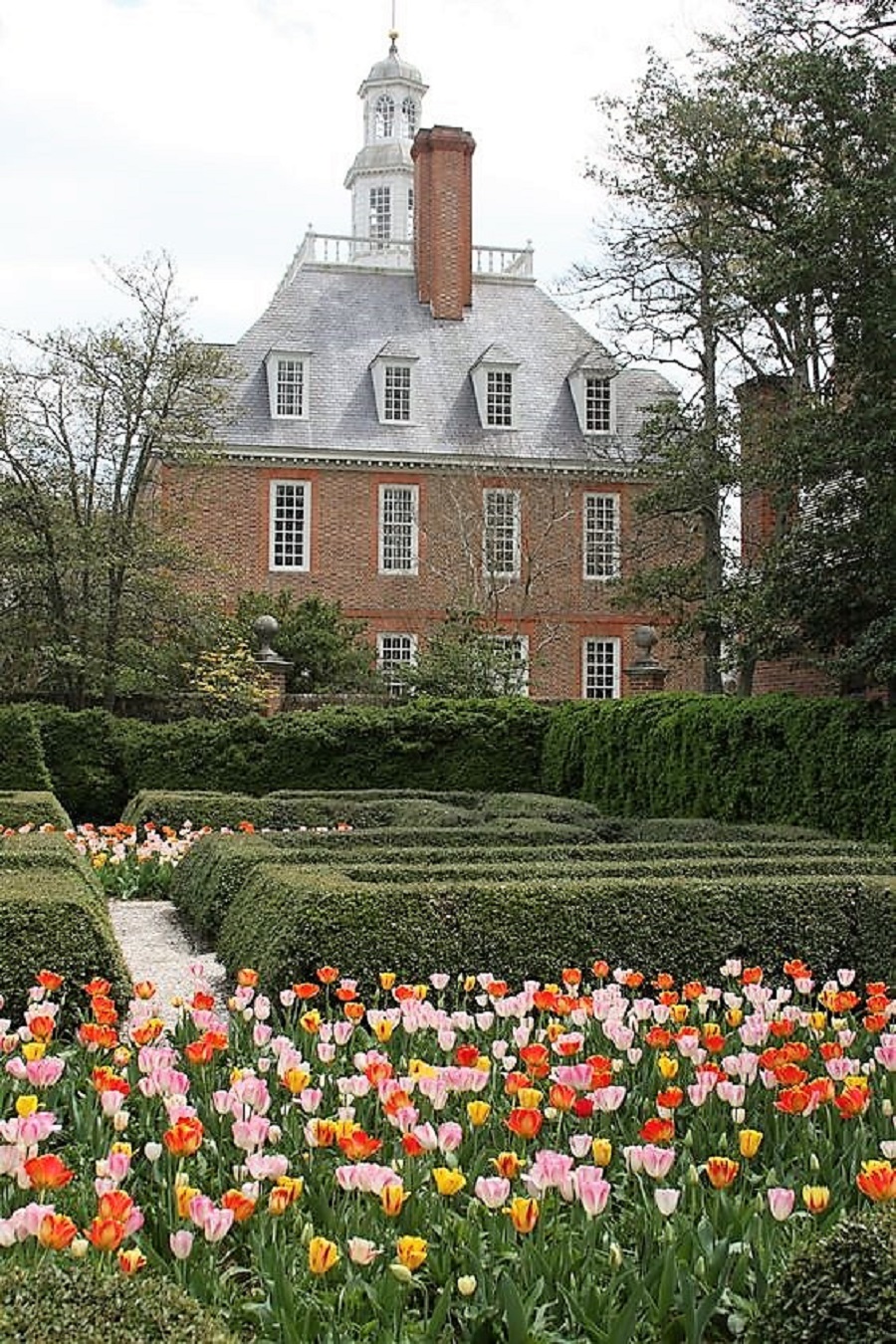 Governor Alexander Spotswood arrived in 1711, to replace the deceased Nott. The new chief executive pushed for the Palace's completion, and on December 9 the legislature provided another £1,560, with £635 more to be spent on outbuildings, gardens, ornaments, furniture, and a four-foot wall around it all. Another act to finish and beautify the residence passed in 1713, but it was 3 more years before Spotswood took up residence, and the work was still incomplete in 1718.The House of Burgesses was tiring of the continuing expense. It complained on November 21 that Spotswood was "lavishing away all the country's money" on the project. Spotswood promised to pay for the canal and the terraced gardens, if the burgesses would not. The word "Palace" was used to describe Virginia governor's house about 1714. Just inside the gate – guarded by a stone unicorn on one side and a stone lion on the other – stood two one-and-one-half story brick advance buildings with gabled roofs. They ran perpendicular to the main structure. By 1723, Rev. Hugh Jones reported that the courtyard was "finished and with beautiful gates." 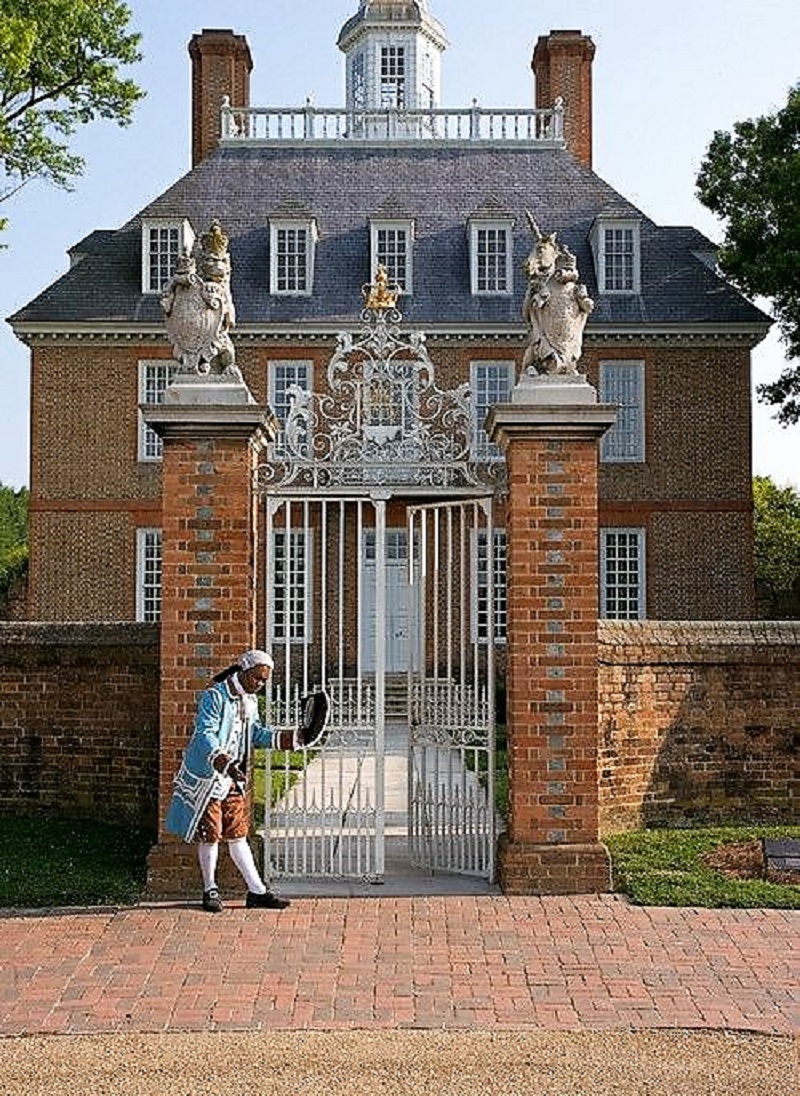 In the words of one modern writer, the Palace visitor traveled a "carefully orchestrated procession of spaces moving toward and culminating in the presence" of the king's immediate representative in Virginia. Down Palace green, through the ornamental iron gates at the entrance to the courtyard, across the forecourt, up the stone steps, into the hall with its display of muskets and the royal coat of arms, up the stairs, and into the governor's room, the important visitor arrived at the chamber of power. Beyond the house was a formal garden in which guests could stand on the mound of earth that covered the icehouse to look into a large, naturalistic park that stretched away to the north. The stable, carriage house, kitchen, scullery, laundry, and an octagonal bathhouse were arranged in service yards beside the advance buildings.

But by 1776, the wooden components of the fences had begun to deteriorate, when note was made in the Virginia Council Journal that they were "Repairing Fodder Houses & paling round the Garden." Twenty five men were appointed "to repair fences of park" in 1777. And it was recorded that "60 foot of plank, 250 nails" were purchased for the task.
at 4:00 AM