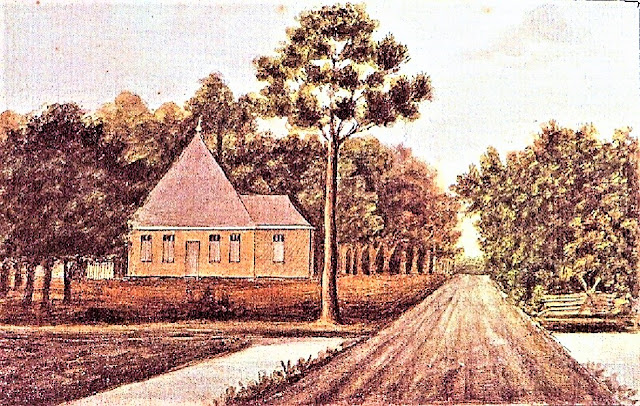 The Stony Creek Presbyterian Church built in Indian Land on Stony Creek near Pocotaligo in 1743. Fraser notes in his Reminiscences, even during his boyhood, the Presbyterian "dissenters" never called their places of worship churches!

Kimberly Pyszka tells us that in 1706, the Church of England became the established church of South Carolina. Construction of several churches began shortly thereafter under the supervision of local parish supervisors. Archaeological testing at the 1707 St. Paul's Parish Church indicates parish supervisors purposely altered the church's orientation from the traditional east—west orientation in order to make it more of a presence on the landscape. A subsequent regional landscape study of other early-18th-century South Carolina Anglican churches suggests that throughout the colony church supervisors strategically placed churches on the landscape to be material expressions of the Anglican Church's presence and power in the culturally and ethnically divided colony. As a consequence of the intentional placement of churches on the landscape, the South Carolina Anglican Church played a larger role in the development of the colony by affecting the expansion of transportation networks and, later, settlement patterns.  See: Pyszka, Kimberly. ""Built for the Publick Worship of God, According to the Church of England": Anglican Landscapes and Colonialism in South Carolina." Historical Archaeology 47, no. 4 (2013): 1-22.

To read more about South Carolina churches & their landscapes, see:

Kryder-Reid, Elizabeth 1994 As Is the Gardener, So Is the Garden: The Archaeology of Landscape as Myth. In Historical Archaeology of the Chesapeake, Paul Shackel and Barbara Little, editors, pp. 131-148. Smithsonian Institution Press, Washington, DC.