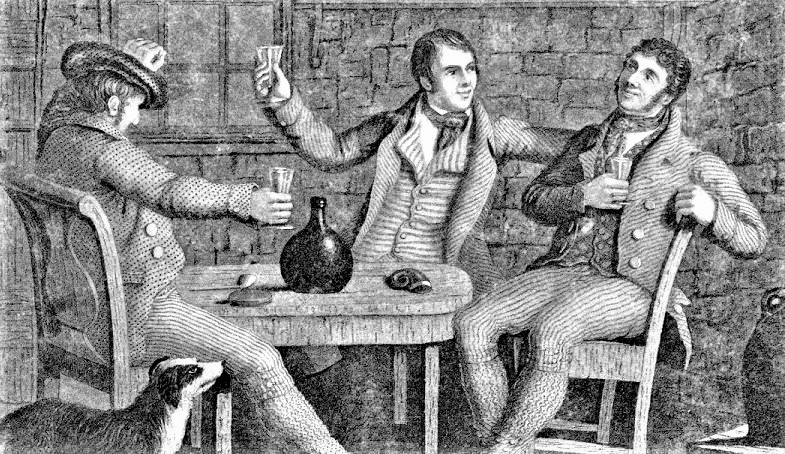 The Puritans loaded more beer than water onto the Mayflower before they cast off for the New World.

There wasn’t any cranberry sauce, mashed potatoes, sweet potatoes, or pumpkin pie to eat at the first Thanksgiving. However, there was beer, brandy, gin, & wine to drink.

A brewery was one of Harvard College’s first construction projects. That was to ensure a steady supply of beer for the student dining hall.

A traveler through the Delaware Valley in 1753 compiled a list of the drinks he encountered. All but three of the 48 contained alcohol.

The Reverend Elijah Craig, a Baptist minister, made the first Kentucky whiskey in 1789.

The distillation of whiskey led to the first test of federal power. It was the Whiskey Rebellion in 1794.

The laws of most American colonies required towns to license suitable persons to sell wine & spirits.

Colonial taverns were often required to be located near the church or meetinghouse.

The Colonial Army supplied its troops with a daily ration of four ounces of either rum or whiskey.

Thomas Jefferson wrote the first draft of the Declaration of Independence in a tavern in Philadelphia.

The first signer of the Declaration of Independence, John Hancock, was an alcohol dealer.

Before he took his famous ride, Paul Revere apparently had two drinks of rum.

The patriot Patrick Henry (“Give me liberty or give me death”) was a bar tender.

President Martin Van Buren was born in his father’s tavern.

Burns, E. The Spirit of America: The Social History of Alcohol. Philadelphia: Temple U Press, 2004.

Grimes, W. Straight Up or On the Rocks: A Cultural History of American Drink. NY: Simon & Schuster, 1993