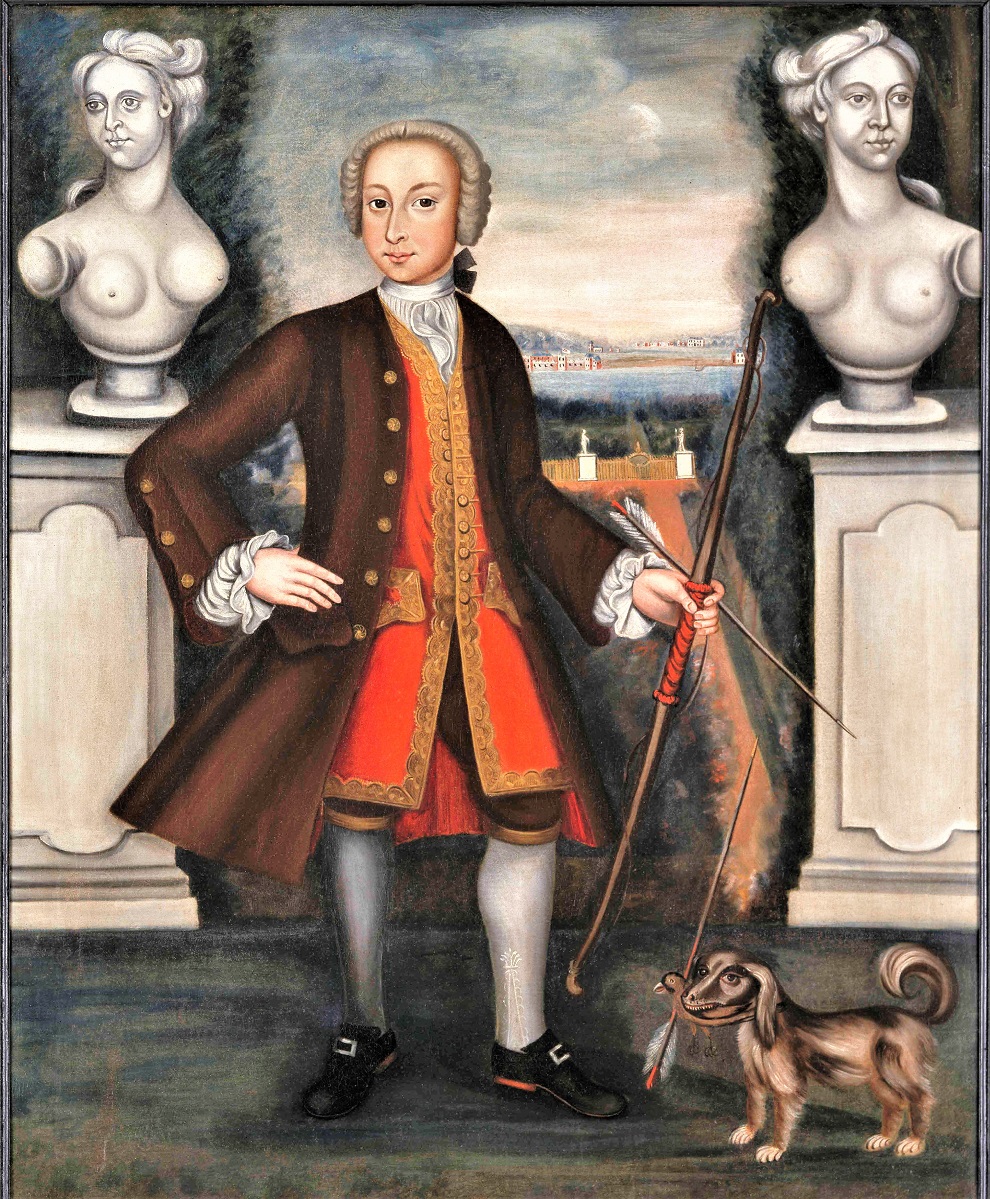 1748-50 George Booth (1753-1777) as a Young Man by William Dering (active 1735-1751) owned by Colonial Williamsburg Foundation
This portrait depicts a rather pretentious young man with a bow & arrow standing in a highly stylized landscape with a small but clever dog at his feet. George Booth (1753-1777) stands in a formal pose, with his proper right hand on his hip and with his proper left foot turned at a right angle to his supporting foot, his head slightly turned to the viewer’s left but his eyes turned toward the viewer.  He wears a dark brown great coat & knee breeches, a bright red waistcoat adorned with heavy gold brocade trim, and a white shirt & neckcloth. His immaculately powdered hair is curled back away from his lovely face. His black shoes display metal buckles & unusually stylish red heels.
His small but fierce dog glares at the viewer while holding in its mouth a bird shot through with an arrow demonstrating the exceptional hunting prowess of his owner. The young man stands slightly in front of & in-between two female busts on plinths, with a distant view of a formal garden in the near background and, in the distant background, a vast walled estate.
The young man's self-assured pose, the nearly bawdy sculptures flanking him, & the formal garden in the distance reveal his real or desired genteel status, while the hunting dog & bow are symbols of his manly game-park & social dominance. The two female, bust-length sculptures on plinths are unique in American colonial portraiture. Young George seems puffed up with manly pride, as he poses between these busts with his bow and arrow. The buildings in the background are unidentified & were probably an artistic invention meant to reflect the sitter’s real or hoped-for standing among Virginia’s elite plantation society.
George Booth (1753-1777) was son of Mordecai Booth(1675-1775) and Joyce Armistead Booth (1705-1770) of Bellville plantation in Gloucester County.  The Booth family may have been acquainted with the artist Dering, when he lived for a brief period in Gloucester. George married Mary Mason Wythe (1751-1814) and they had children: George Wythe Booth (1772-1808) & Elizabeth Booth (Roy) (b 1773).  After George's death, Mary Mason Wythe Booth (1751-1814) married Philip Tabb in 1788, in Gloucester, Virginia.
Mary Mason Wythe was the daughter of Nathaniel Wythe & Elizabeth Todd Booth.  Upon the death of her first husband George Booth, land was transferred to their daughter Elizabeth upon which her husband, James Henry Roy would build "Green Plains" on North River.
After her husband's death, George's wife Mary Mason Wythe Booth married her first cousin Phillip Tabb (1750-1822) in 1788. Their home was the center of the county's hospitality. While Philip Tabb followed the hounds, bet on horses, and played cards, his wife became more devout.  She became a Methodist and built the Old Mt. Zion Methodist Church. Bishop Asbury of the M.E. Church in his tour through Gloucester in 1786, said that "she and Joseph Bellamy were the most godly people in Gloucester."
at 4:00 AM