Arbors with & without Accompanying Fences

Arbor refers to an open structure formed from leafy trees, shrubs, or vines planted closely together for self-support or supported 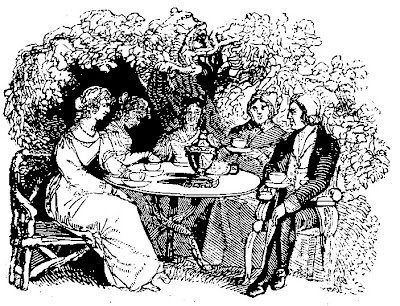 on a frame offering shade, privacy, and protection for a gathering of people or shading a garden bench for only a few people.

Larger arbors for community gatherings in 18th-century colonial America usually were constructed from the cut & bound limbs and leaves of local plants. In the British American colonies, an arbor was often referred to as a bower or shady retreat.

The term arbor was used early in England, often applied to a shaded alley or walkway. In England, Chaucer referred to arbors (herbers) around 1385.

John Parkinson mentioned arbors in his 1629 Paradisi in Sole Paradisus, "Arbours also being both gracefull and necessary, may be appointed in such convenient places, as the corners, or elsewhere, as may be most fit, to serve both as shadow and rest after walking."

In 1712, Antoine-Joseph Dezallier d'Argenville (1680–1765), French courtier, natural historian, artist, & garden theorist, wrote in his Theory and Practice of Gardening that arbors were of 2 sorts, natural and artificial. Natural was fashioned from branches of trees, while artificial arbors were composed completely of lattice-work.

And Philip Miller suggested that the arbor might be out of fashion in his 1755 Dictionary, "These were formerly in great esteem with us than at present...covered seats or alcoves are everywhere at this time preferred to them."

Despite the fact that Miller saw arbors in decline among the people in the know, references to arbors appear early in the British American colonies & continue to appear throughout the 18th-century. In 1680, visitor Jasper Danckaerts reported, "We had nowhere seen so many vines together as we saw here, which had been planted for the purpose of shading the walks on the river side, in between the trees."

Peter Kalm noted in his Travels in North America in 1749, that the colonials planted wild vines in "gardens near arbours, and summer-houses...over which the vines climb with their tendrils, and cover them entirely with their foliage, so as to shelter them from the heat & the sun."

In 1754, when Dr. Alexander Garden described botanist John Bartram's garden in Philadelphia, he wrote, "He disdains to have a garden less than Pennsylvania, & every den is an Arbour, Every run of water, a Canal, & every small level Spot a Parterre."

Even the small town garden of Annapolis, Maryland, craftsman William Faris contained an arbor in 1793, when he wrote in his diary that he had "planted flowering beans...round the Arber."

Often arbors were larger, more open sheltered spaces meant to hold many people for gatherings. In 1743, in Chesterfield County, Virginia, a church meeting was held "at Clays arber." Several public celebrations were held in arbors built specifically for the special occasion.

An issue of the August, 1746, Virginia Gazette in Williamsburg reported that "The Gentlemen of Hanover County... expressing their Joy and Loyalty, on Occasion of the Defeat of the Rebels in Scotland...a great Number of Gentlemen and Ladies, inhabitants of that and the adjacent Counties, met at the House of Mr. Waters; where a handsome Dinner was provided; a long Arbour was set up, in which 50 Gentlemen and Ladies din'd."

The South-Carolina Gazette in July of 1755, described a meeting with the Cherokees in Charleston, "On Wednesday July 2d, Cannacaughte the Chief, and the other Indians , arrived from their Camp, which lay at three Miles Distance, and were received by the Governor as usual; and His Excellency and Cannacaughte being seated under an Arbour, all the Head-men and Head warriors were placed on Benches fronting them, the other Warriors and Indians sitting all around on the Ground under the Trees."

And during the Revolution in 1781, Robert Honyman reported that "There was not one Tent in the British army, all of them lying under temporary sheds or arbours, made with boughs of Trees, fence rails &c., even officers of the highest rank."

A public celebration honoring an ally during the revolutionary war was reported in the Pennsylvania Gazette in the summer of 1782. "On the 25th of June last, the birth of the Dauphin of France was celebrated by the people of Talbot county, in the State of Maryland, in pursuance of the recommendation of the Governor and Council of that State, a convenient arbour was erected on the banks of Wye river, at Mr. Baker Old Field Landing, where an elegant entertainment was provided sufficient for 200 people, at which a large number of respectable ladies and gentlemen dined."

In 1797, Frances Baylor Hill of "Hillsborough" in Virginia, reported that she "went to Dunkirk to the Barbacue...The Ladies all went to the arbour and had din'd."

Arbors were also a favorite in the commercial public pleasure gardens in the new republic. They offered both shelter and privacy as patrons discussed business, politics, or just opted for romance.

In 1787, Rev. Manasseh Cutler described the popular Gray's Garden near Philadelphia, Pennsylvania, "At every end, side, and corner, there were summer-houses, arbors covered with vines or flowers or shady bowers encircled with trees and flowering shrubs, each of which was formed in a different taste."Henry Wansey also noted the arbors in Gray's Gardens in 1794, "The ground has every advantage of hill and dale, for being laid out in great variety; and it is neatly decorated with alcoves, arbours, shady walks, etc." 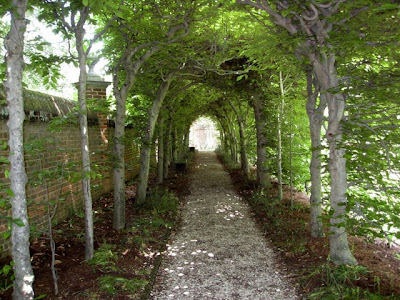 Often the shade and privacy offered by an arbor was used to promote the sale or rental of property. In Charleston, South Carolina in February, 1734, a property for sale advertisement in a newspaper touted it to be, "on an island which commands an entire prospect of the Harbor...A delightful Wilderness with shady Walks and Arbours, cool in the hottest seasons."

In 1767, the Pennsylvania Gazette advertised, "To be LETT, On the Five Mile Round, about two miles south of Philadelphia, on a pleasant spot of ground. A TWO story brick house of 45 by 31 feet, four rooms on each floor, three good rooms in the garret... a garden and orchard of choice fruit trees; the ground is divided by fences in a regular uniform manner; two summer houses of each side the entrance of an avenue, at the end of which is an arbour."

An arbor was a selling point for a house in 1789, which the owners were attempting to sell in New York City, "That elegant Dwelling House, called White-conduit house, two stories and half high, having seven fire places...together with an agreeable pleasure garden, with beautiful arbours, and a stable and coach house."

Eliza Southgate, in 1802, described the gardens the Hasket Derby house in Salem, Massachusettes, "at the upper end of the garden there was a beautiful arbour formed of a mound of turf and 'twas surrounded by a thick row of poplar trees which branched out quite to the bottom and so close together that you could not see through."

Thomas Jefferson, who was always redesigning his homes & gardens, wrote of new garden plans for Monticello in 1804, "Through the whole line (of temples) from 1 to 4 have the walk covered by an arbor, to wit, locust forks set in the group crossed by poles at top & lathes on these. Grape vines principally to cover the top. The sides quite open."

These arbors are similar to that described by Juliana Margaret Conner in Salem, 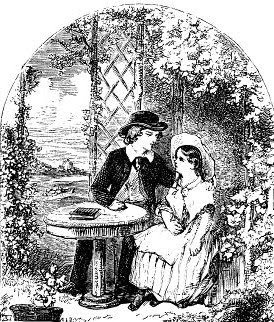 North Carolina in 1827, which had been planted in the 1780s, "into the garden...we saw...a curiosity...extremely beautiful. It was a large summer house formed of eight cedar trees planted in a circle, the tops whilst young were chained together in the center forming a cone. The immense branches were all cut, so that there was not a leaf, the outside is beautifully trimmed perfectly even and very thick within, were seats placed around and doors or openings were cut, through the branches, it had been planted 40 years."

The image of the open-air arbor was even used in a piece of advice reported in the Williamsburg newspaper from a gentleman to his son. The Virginia Gazette printed in January of 1752, the instructions of Lord Treasurer Burleigh to his son Robert. "Let thy Kindred and Allies be welcome at thy House and Table. Grace them with thy Countenance, and further them in all honest Actions; for by this Means thou shalt so double the Band of Nature as thou shalt find them so many Advocates to plead an Apology for thee behind thy Back: But shake of those Glow-worms, Parasites and Sycophants, who will feed and sawn upon thee in the Summer of Prosperity, but in an adverse Storm, they will shelter thee no more than an Arbour in Winter."
at 4:00 AM