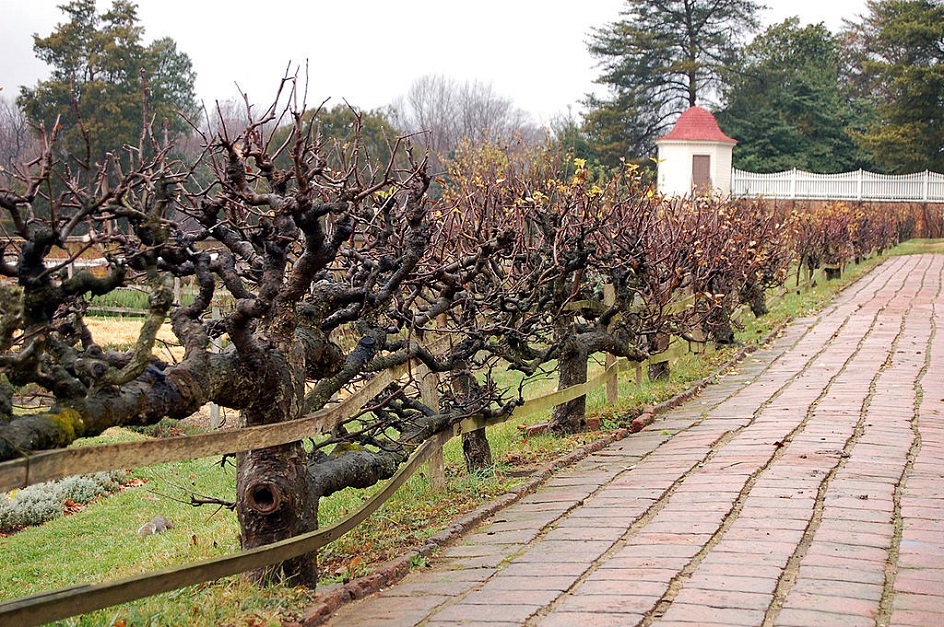 In the British American colonies, an espalier was a lattice-work or frame-work or wall support system, sometimes defining the boundry of a garden, upon which ornamental or bearing fruit trees were pruned & trained. 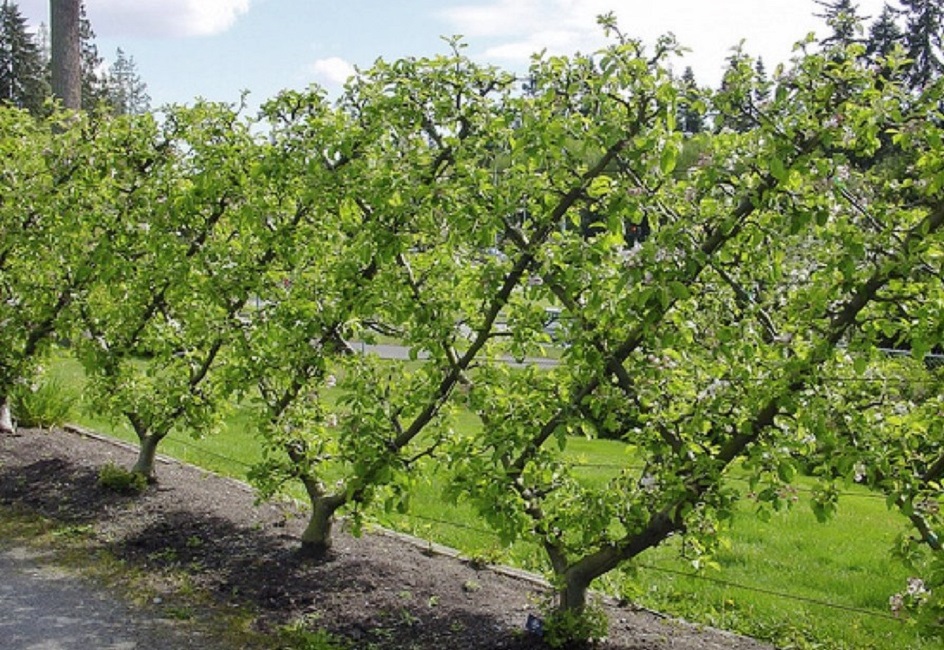 Espaliered fruit trees were often used to create a focal point and as a form of art, as well as for the practical fruit that they produced.  Espalier, a French word derived from the Italian spalliera, which means "something to rest the shoulder (spalla) against," is the process of controlling plant growth in a flat plane, usually against a wall or fence, or along a free-standing trellis. Trees espaliered on a wall were often called wall trees or wall fruit. 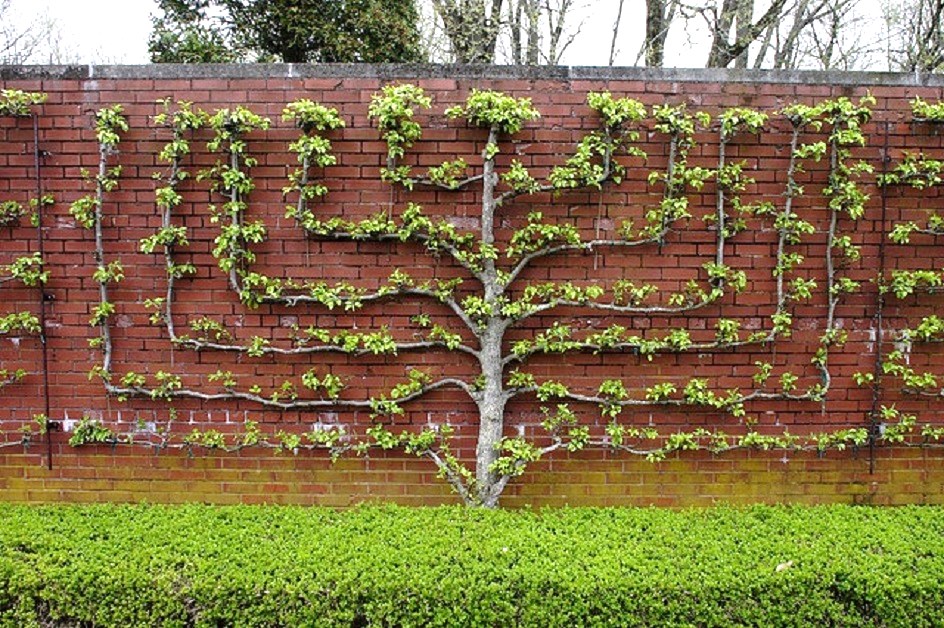 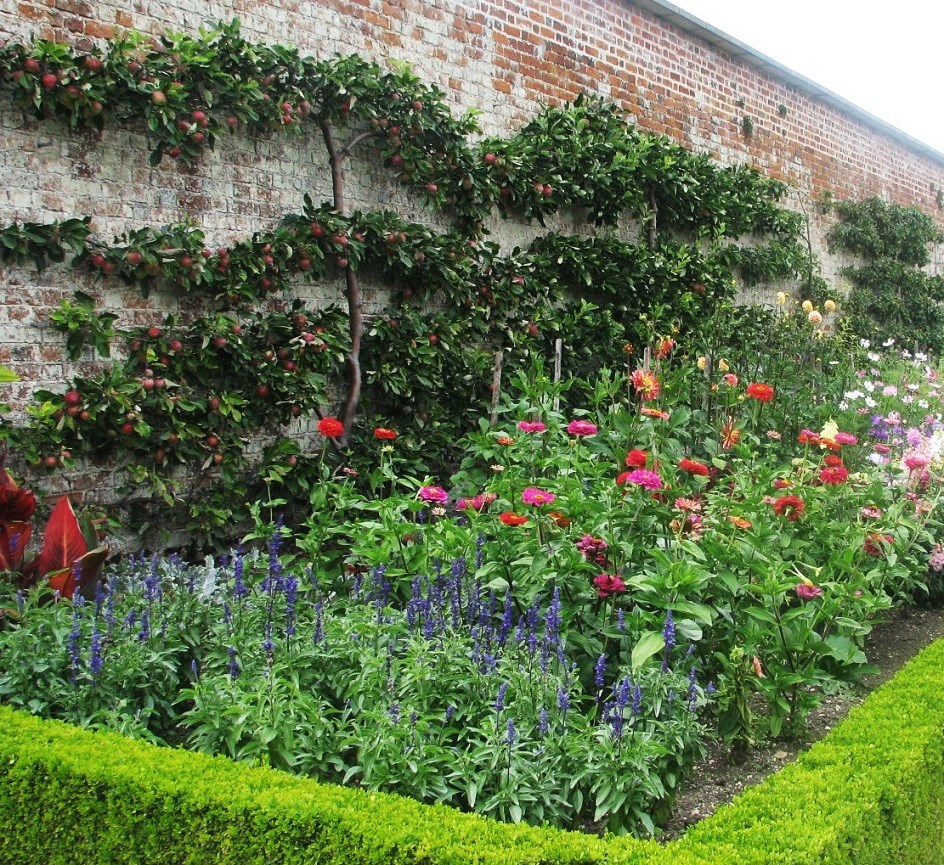 The practice of espalier may go back to early Egypt, where tombs from about 1400 BC have been found with paintings of espaliered fig trees. In the Middle Ages in Europe, manuscripts depict espaliered fruit inside walled monastery gardens or castle courtyards economically bearing fruit without filling the limited open space. 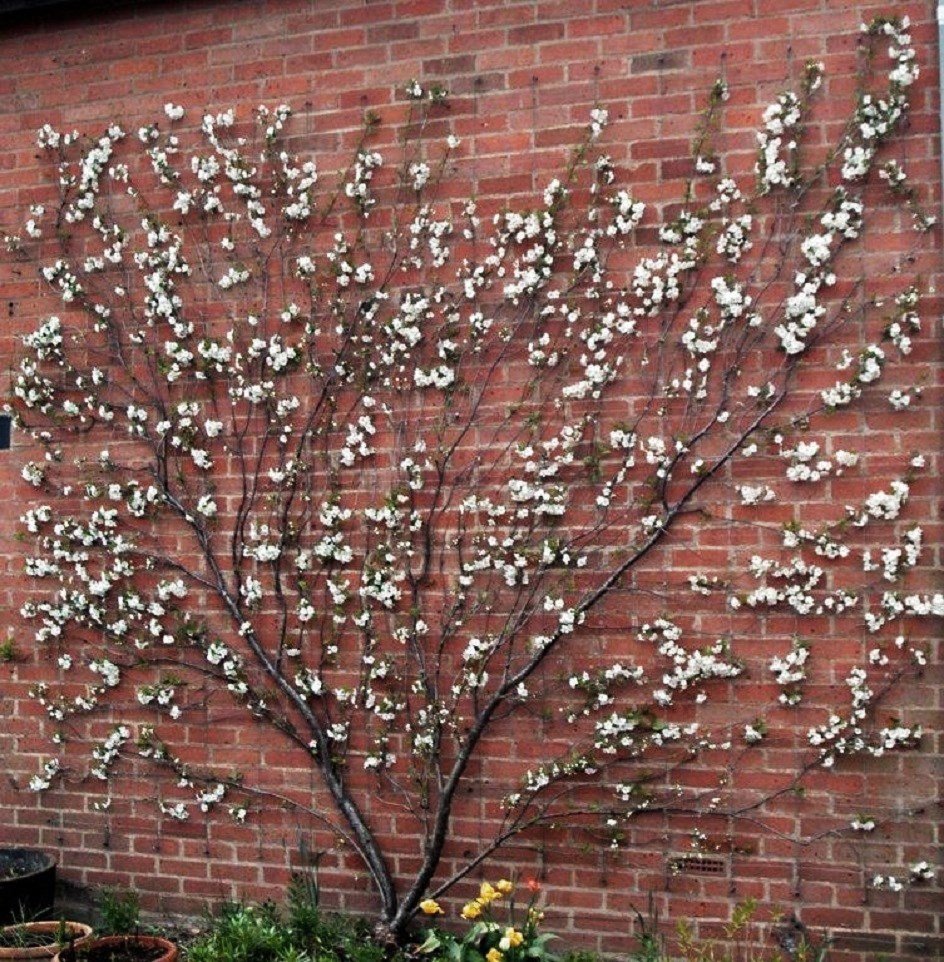 The classic European styles can be traced back to the 16th & 17th centuries, where they were developed in the marginal climates of northern France & England for more efficient fruit production. 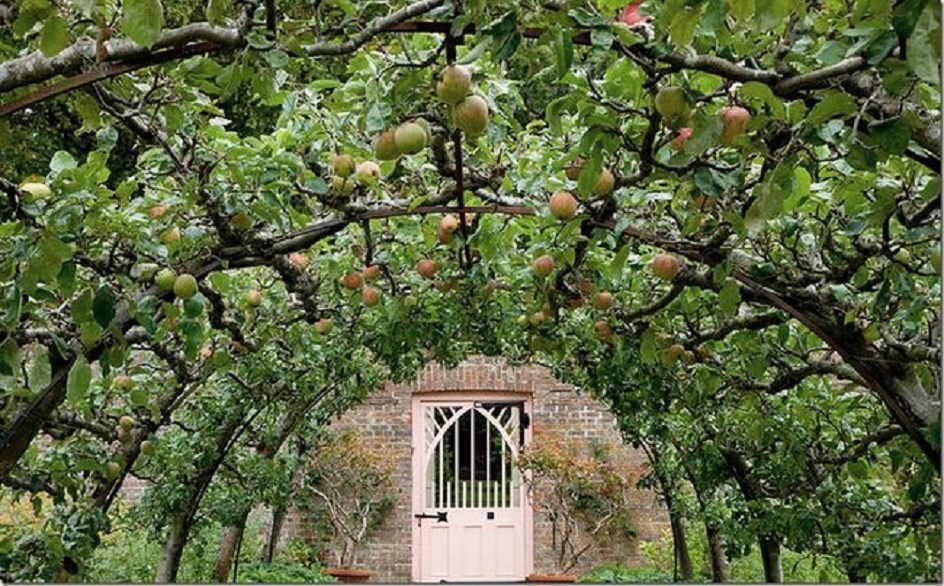 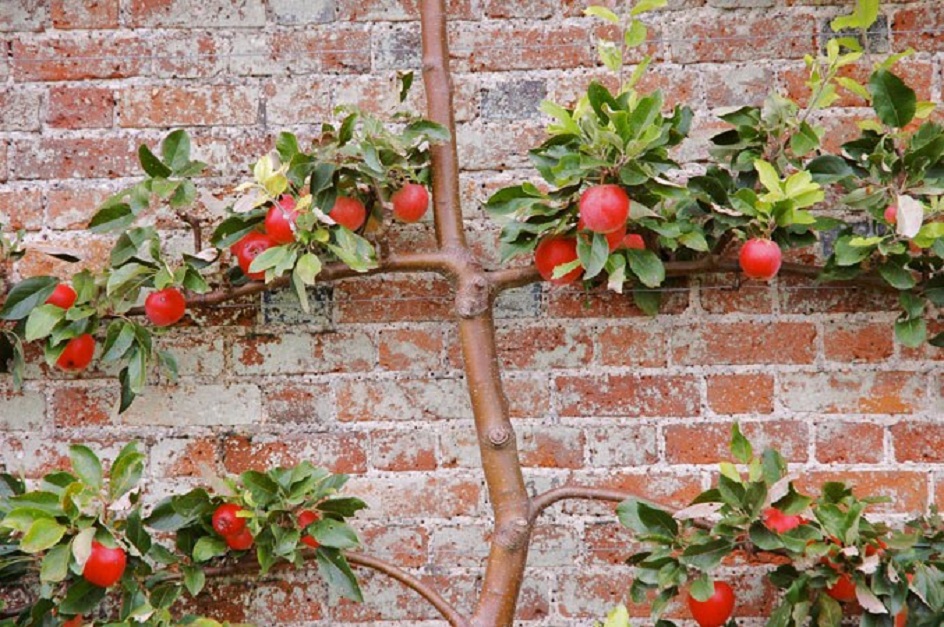 The wall tree or wall fruit system was meant to protect plants from wind or weather and, hopefully, to enable espaliered trees to bear fruit earlier than stand alone trees, either natural or espaliered. 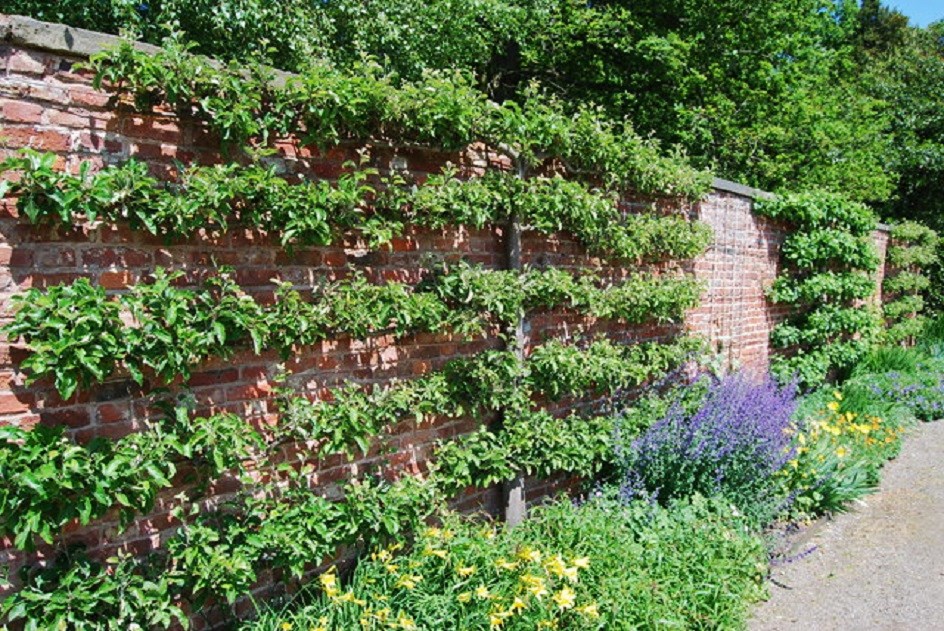 In 1736, Thomas Hancock at Boston, Massachusettes, wrote to England requesting information on the availability of young trees, "Send me a Catalogue of what Fruit you have that are Dwarf Trees and Espaliers." 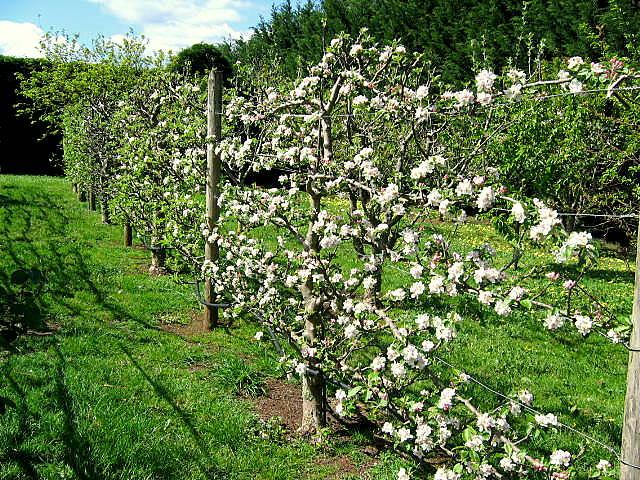 Visiting Englishman James Birket wrote in September of 1750, about Captain Godrey Malbone's estate at Newport, Rhode Island, "The Surface of the Earth before the house is a Handsome Garden with variety of wall fruits And flowers...this house & Garden is reckond the wonder of that part of the Country." 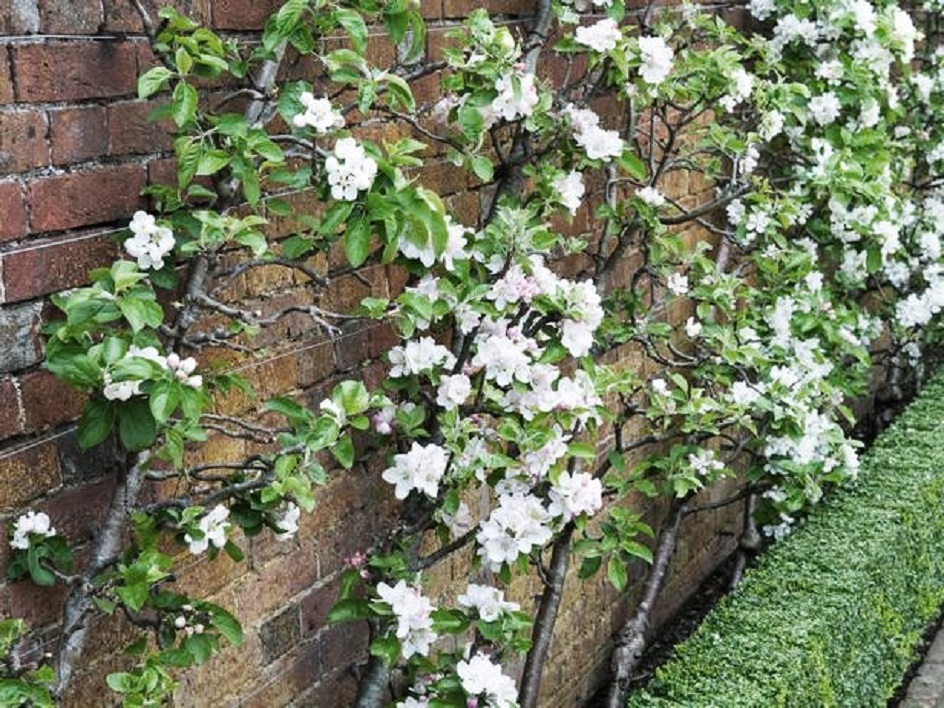 In Baltimore, Maryland in 1800, the property of Adrian Valeck was listed for sale in the Federal Gazette, "A large garden in the highest state of cultivation, laid out in numerous and convenient walks and squares bordered with espaliers, on which...the greatest variety of fruit trees, the choicest fruits from the best nurseries in this country and Europe have been attentively and successfully cultivated." 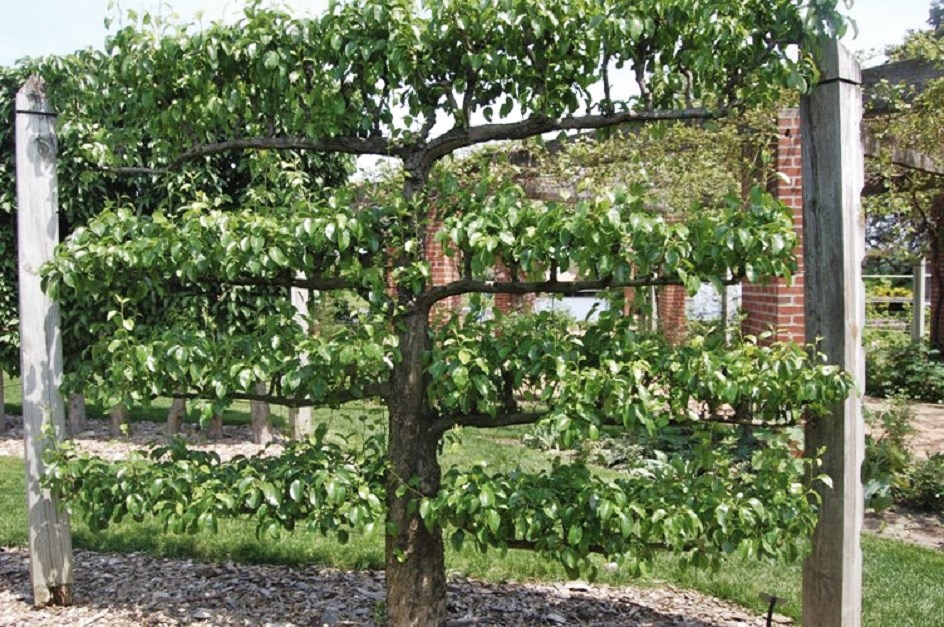 John Gardiner and David Hepburn advised gardeners in their 1804 The American Gardener, published in Washington, District of Columbia, that January was the month to "prune espalier trees." 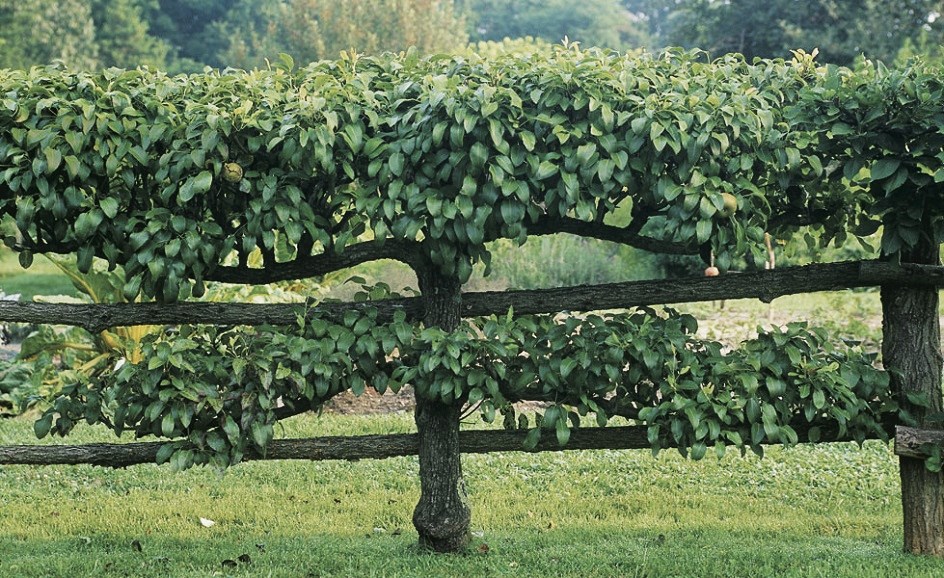 In his 1806 American Gardener's Calendar, Bernard M'Mahon of Philadelphia, Pennsylvania, wrote, "Espaliers are hedges of fruit trees, which are trained up regularly to a lattice or trellis of wood work, and are commonly arranged in a single row in borders, round the boundaries of the principal divisions of the kitchen garden; there serving a double or treble purpose...profitable, useful, and ornamental. 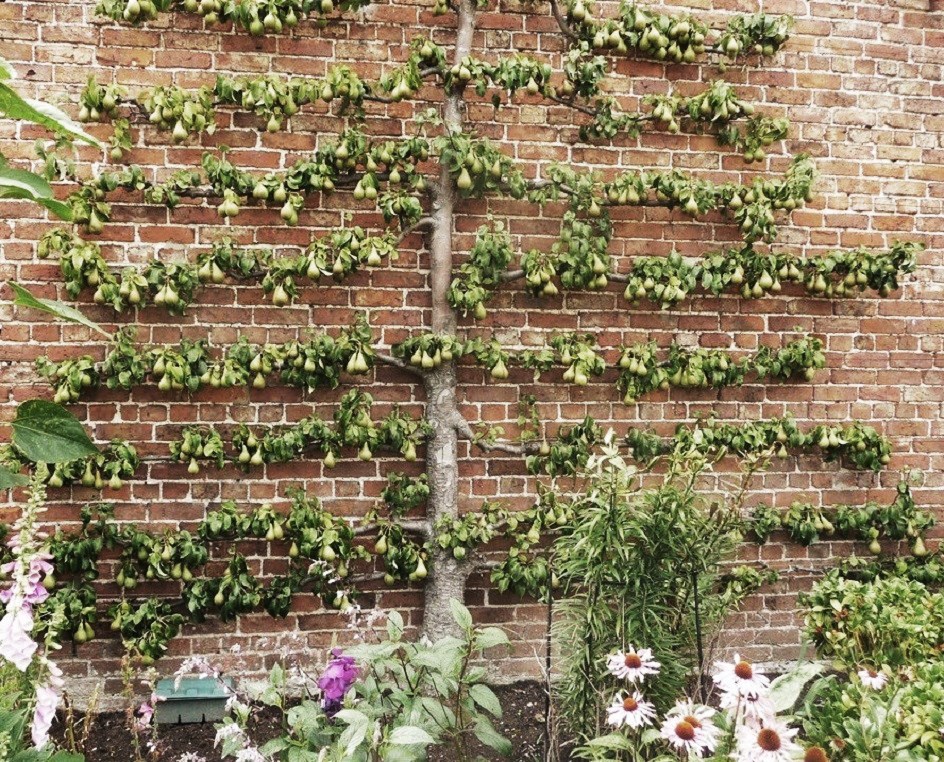 "They produce large fine fruit plentifully, without taking up much room, and being in a close range, hedge-like; they in some degree shelter the esculent crops...and also they afford shelter in winter...and shade in summer; 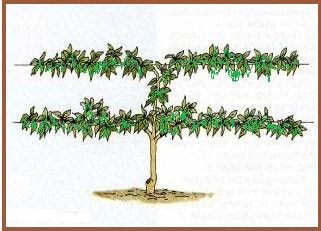 "and as to ornament and variety, what can be more delightful in spring, in the excursion of the walks, than the charming appearance which the trees make when covered with their showy bloom... 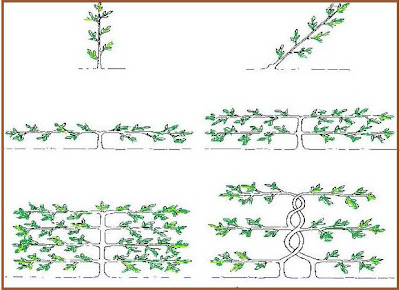 or in summer, to see the fruit of the different sorts advancing to perfection, and in autumn arrive successively to maturity? 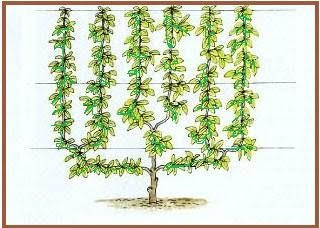 "And as the trees are arranged all of an equal height, not exceeding six feet, closely furnished with branches, ranged horizontally at regular distances one above another, from the very ground upwards, the fruit hereby are exhibited to great advantage, and being low, and the branches fixed, are convenient to pull, and not liable to be blown down by wind. 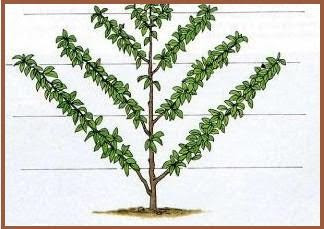 "An espalier has this advantage over a wall tree, that as being wholly detached, the branches have liberty to form fruit spurs on both sides, which in the wall tree cannot be effected but on one; in fact, common fruit-walls are unnecessary in the United States, except in the eastern and some of the middle states, where they are useful in forwarding to due perfection, and flavour, some late kinds of superior peaches, grapes, and other like fruits... 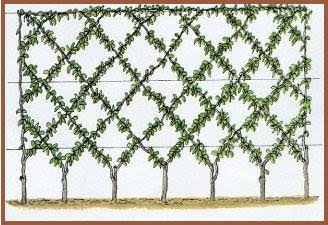 "Trellis's are also used occasionally for wall trees, where the wall does not admit of nailing the branches immediately against it." 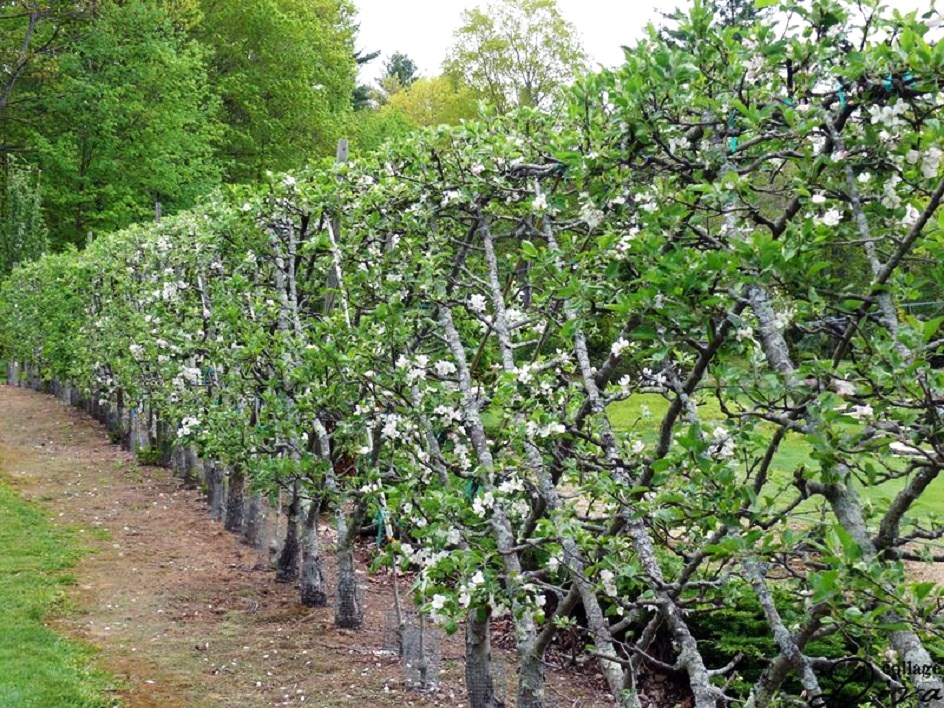 In the British American colonies & the early republic, where combining ornament with function was particularly admired, most espaliered plants were both useful & symbolic fruit trees. 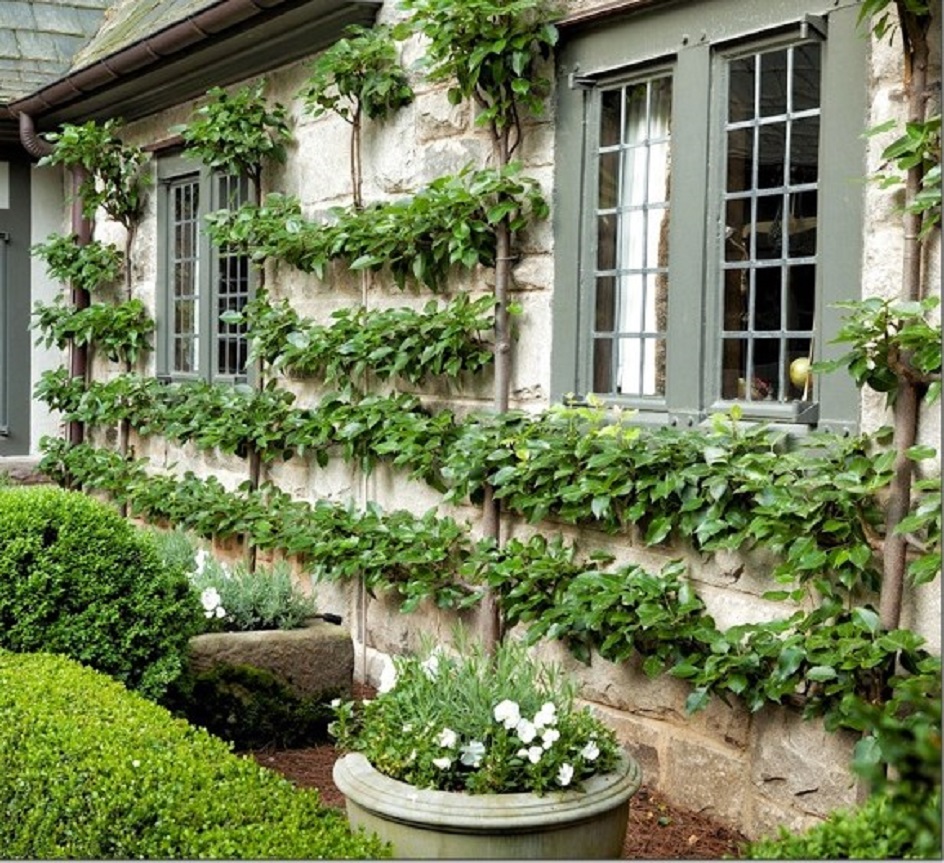