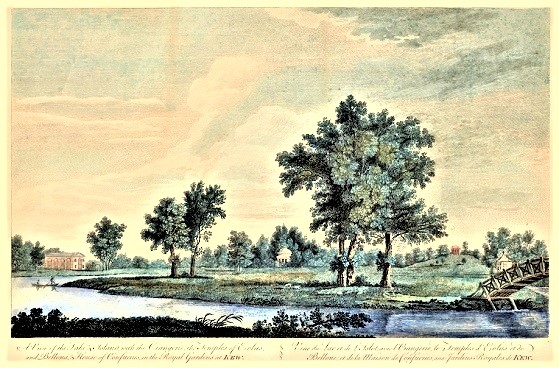 A Natural Garden in the English Taste. An etching depicting a view of the lake & island in the gardens of Kew Palace, showing various temples & the orangerie, with both English & French inscription. Hand colored. This view of a more natural landscape contains a view of the Lake & Island, with the Orangerie, the Temples of Eolus & Bellona, & the House of Confucius c 1763. This view was engraved for William Chambers’s Plans, Elevations, Sections & Perspective Views of the Gardens & Buildings at Kew, published in 1763.
Most early American pleasure gardening gentry intentionally adopted classic, practical, geometric, ornamental gardens for their properties.  Their landscape designs did often include avenues of trees leading to the plantation house, like rows of soldiers standing at attention.
The new "English taste" garden design of the first decades of the 18th-century with its intentional serpentine walks & flowing lines in imitation of Nature was not particularly attractive to early Americans, who were busy carving an obvious order out of the "howling wilderness" that surrounded them.

Scotsman William Murray wrote to his cousin Dr John Murray near Charleston in 1753, advising him to adopt the English Taste for his new landscape plans.  Redesigning their landscape to imitate Nature seemed a little impractical to many American gentry.

In 1789, Jedidiah Morse (1761-1826), noted clergyman & geographer, wrote of one country seat, “Its fine situation. . .the arrangement and variety of forest-trees - the gardens...discover a refined and judicious taste. Ornament and utility are happily united. It is, indeed, a seat worthy of a Republican Patriot.”

Generally, American gardeners shared John Adam’s (1735-1826) negative attitude towards the excesses of the English natural grounds movement. During his 1784 tour of English gardens with Thomas Jefferson, he announced, "It will be long, I hope, before ridings, parks, pleasure grounds, gardens, and ornamented farms grow so much in fashion in America."

In the same year, George Washington (1732-1799) wrote to the wife of Marquise de Lafayette (1757-1834) encouraging her to accompany her husband on a return visit to the new American republic. "You will see the plain manner in which we live; and meet the rustic civility, and you shall taste the simplicity of rural life."

In 1783, Johann David Schoff traveled to Pennsylvania and wrote, "The taste for gardening is, at Philadelphia as well as throughout America, still in its infancy. There are not yet to be found many orderly and interesting gardens. Mr. Hamilton's near the city is the only one deserving special mention. Such neglect is all the more astonishing, because so many people of means spend the most part of their time in the country. Gardens as at present managed are purely utilitarian—pleasure-gardens have not yet come in, and if perspectives are wanted one must be content with those offered by the landscape, not very various, what with the still immense forests."

In the early Republic, many gardeners strove for a balance of useful plants & trees & genteel design. On both town & country plots, most gentry, merchants, shopkeepers, & artisans planned gardens that were both practical & ornamental in geometric patterns.

Some gentry who gardened were aware of the new English natural style & sometimes added serpentine entry roads & paths that meandered through the wooded edges of their grounds, but they overwhelmingly designed their gardens with traditional rectangular beds & approaching straight avenues of trees.

Why were early American gardeners slow to adopt the English natural grounds movement? During the first decades of the 18th-century, English gardeners had begun to rebel against strict geometric gardens with rigidly trimmed topiary trees, and in favor of more natural garden layouts.  The emergence of an informal garden style based on irregular rather than straight lines was influenced, in part, by travel books on the Far East, illustrating the winding paths & random rock formations in Asian gardens.
English gardeners added Chinese structures to the garden, such as the 1760 pagoda at Kew Gardens. The chinoiserie persisted as books on the concept were published, notably William Chambers’s 1772 Dissertation on Oriental Gardening.
The reading of classic landscape literature also encouraged the more natural, informal garden-park espoused by Virgil plus the idyllic images of the Roman campagna depicted by the 17-century French landscape painters Claude Lorrain & Nicolas Poussin.

Early American gardeners were engulfed in untamed surroundings & their interest in ancient precedents prodded them toward designing the orderly gardens, that they planted around their dwellings. Early in his 1806 garden book The American Gardener, Philadelphian Bernard M’Mahon (1775-1816), described “ancient gardens,” by which he meant the gardens common a hundred years earlier in Britain & Ireland.

Ironically, just as the English were rebelling against their “ancient” geometric garden designs, M’Mahon found America’s new citizens clinging to the formality of the classical past. Perhaps the young nationals were looking for the security of precedents to reinforce their present unsteady situation. The ordered & hierarchical implications of classical terraced gardens probably appealed to the gentry, who were losing their privilege of rank through association with the British & groping to maintain that privilege through natural, & therefore inevitable, order instead of through historical precedent.

Americans found the enlightened ideas & orderly, geometric gardens of the Italian Renaissance particularly attractive during the early national era. Thomas Jefferson once boasted, “Ours are the farmers who can read Homer.”
Southern gentlelady, Eliza Lucas Pinckney, recounted in 1742, “I have got no further than the first volume of Virgil…to find myself instructed in agriculture as well as entertained by his charming pen.”
More than 70 years later, Jefferson’s bother-in-law Henry Skipwith wrote to a friend who was planning an orchard, “Virgil’s Georgics would have given you a full idea of his Quincunx.”
Library records indicate that America’s literate gardeners were also reading Richard Bradley’s 1725 Survey of the Ancient Husbandry & Gardening, & Adam Dickson’s 1778 Husbandry of the Ancients, published in 1788, and the original writings of Columella, Virgil, Cato, & Pliny, whom they saw as providing models of day-to-day estate & garden management, including food production.

One British visitor to the Chesapeake observed, “Frenchmen...appear to me to be the best judges of gardening in America, perhaps because their own climate & soil are more nearly similar to those of America, than either the English or Scotch.”
Even Thomas Jefferson, touted by many as a promoter of the English natural grounds movement, claimed to admire the controlled, geometric French gardening above all others.

Benjamin Henry Latrobe, upon his initial tour of America between 1795 & 1798, condescendingly noted the classical influence prevalent in the Chesapeake. He wrote that the gardens at Mount Vernon were “laid out in squares, & boxed with great precision…for the first time again since I left Germany, I saw here a parterre, chipped & trimmed with infinite care into the form of a richly flourished Fleur de Lis: The expiring groans I hope of our Grandfather’s pedantry.” Americans were clinging to European gardening traditions rather than adopting the natural grounds movement.

M’Mahon had come from the British Isles when English landscape architects were abandoning Western traditions of formal garden design & embracing more natural forms, which were applied to the larger expanses they called pleasure grounds. The extreme formality of French & the fussiness of the miniature Dutch flower gardens helped spark this British movement against geometry & artificiality in the garden.

The English landscape itself was to become the ultimate garden. Intricately planned serpentine rivers & lakes reflected “natural” hills planted with carefully chosen trees & shrubs. M’Mahon’s gardening treatise reviewed the use of the popular English ha-ha, a wall or ditch sunk below the level of garden, which was intended to make the gentleman’s lawn appear to flow into the surrounding countryside. In England, where laws kept all but the rich from hunting deer & small game, these ha-has kept the hunting preserve of the gentry secure.

Ha-has were used occasionally in the 18th-century Chesapeake, but they usually surrounded grounds still dominated by formal geometric gardens. The ha-ha was not just an invisible barrier to keep intruders out of the garden & grounds. It was simply the area that divided the stage upon which patricians exercised paternalism safely separated from their hopefully awe-filled audience, all of their lesser neighbors. The ha-ha was a device to make the gentry seem at one with their personal external environment, in which they could place themselves on top but within the safe confines of an invisible wall.

Eighteenth-century English pleasure grounds were never truly natural. As M’Mahon explained, they were planned to look natural & were then decorated, often with classical Roman ruins or oriental ornaments. Chinese garden concepts excited the European gentry, when first reports of them reached Europe in the 18th century; but Western attempts to emulate Oriental design usually resulted only in copies of their architectural features.

Until fairly recently, garden historians generally agreed that by the end of the 18th century, very few formal gardens, with traditional geometric bed designs, remained in Britain. This may not be the case, but apparently, the British had reached a level of sophistication that allowed them the freedom to resist their highly structured civilization & their hedged landscapes. This change, combined with the need to conserve dwindling supplies of timber & game, led to the natural grounds movement in England. The movement did not spread quickly in America.
Notes on the image: The park buildings depicted were all located at the southern end of the Kew estate - including the Pagoda (1761-2) with the Alhambra (1758) to its left & the Mosque (1761) in the right distance. While the Pagoda has survived, with a few of Chambers’s smaller park buildings (the Orangery & Temples of Aeolus & Beltona), the Alhambra & Mosque have not. The site now lies within the grounds of the Royal Botanic Gardens. From the late 1740s there are references to the development of a botanic garden on a 9-acre plot to the south of the Orangery close to the House.
Kew was the country home of the Prince & Princess of Wales, the parents of George III.  On the death of the widowed Princess in February 1772, the King & Queen resolved to move their summer residence from Richmond Lodge to Kew. Writer Fanny Burney (Frances Burney d'Arblay 1752-1840) wrote " The Royal Family are here always in so very retired a way that they live as the simplest country gentlefolks." (Well, not exactly...)
See:  George III & Queen Charlotte: Patronage, Collecting & Court Taste, London, 2004
at 4:00 AM