Early American Book - 1806 M'Mahon's Gardening within a Frame in January

Gardening within a Frame during January

Many will think that the instructions hereafter given, for the raising of early Cucumbers and Melons, in frames, are too diffuse; especially in a country which abounds in these kinds of fruit, produced in such quantities, in summer and autumn, without artificial heat, or very much trouble.

The remark may be just, but the principal motive for giving these lengthy instructions, is to exercise the young Gardener, in the art of managing Garden-Frames in general; an art absolutely essential to every good Gardener, and which cannot be better exemplified than in the raising of early Cucumbers and Melons. And besides these fruit coming into use at an early season, will be much valued and esteemed.

As several other kinds of Kitchen-Garden vegetables are desirable at an early season, such as cresses, rape, lettuce, mustard, radishes, Sec. to cut while young; asparagus, radishes, peas, kidney beans, &c. to be forwarded to early perfection; cauliflower and cabbage plants, to succeed those sown in September, and to produce a principal crop for early summer use; you should now provide the necessary supplies of hot stable dung, rich earth, and other requisites proper for their cultivation in hot beds, as explained for each, under its respective head. 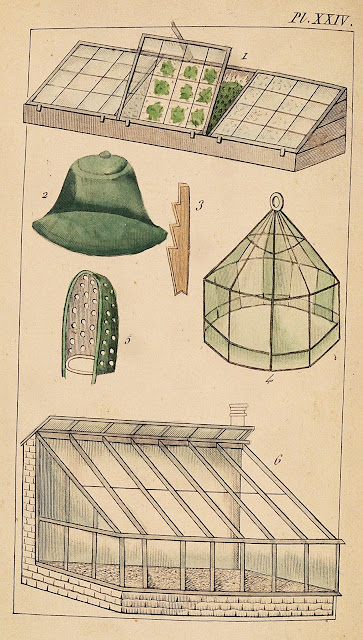 If not already provided with hot-bed-frames and lights, you may get them made agreeably to the following instructions. Large frames ought to be made of inch and half, or rather two inch plank,

of the best yellow pine, nine feet two inches long, four feet ten inches wide, as high again in the back as in front, to give the top a due slope to the sun and a proper declevity to carry off the wet when covered with glass lights, to move off and on occasionally ; every jomt ought to be tongued, the better to prevent the admission of cold air into, or emission of warm air out of the bed, but in such manner as the gardener may think proper. The back and front are to be nailed to corner posts, so as to admit the ends to fit in neatly, which ends are to be made fast to the posts by iron bolts keyed in the inside, for the greater facility of taking the frame asunder when necessary; each end must be made one inch and a half higher than the back and front, so as that one half its thickness may be grooved out on the inside, for the sash to rest and slide on, and the other half left for its support on the outside ; when finished gWe it two or three good coats of paint before you Use it, and with a little care and an annual painting, it may last you twenty years.

These frames will take three lights of three feet wide each, each light containing five rows of glass panes, six inches by four, overlapping one another about half an inch, which of all other sizes is the most preferable, on account of their cheapness in the first place, the closeness of their lap, their general strength and trifling expence of repairs; however, each person will suit his own convenience as to the dimensions of glass. Where the sashes when laid on the frame meet, a piece of pine about three and a half inches broad and near two thick, should run from back to front morticed into each, for their support, and for them to slide on; in the centre of which, as well as in the ends of the frame, it will be well to make a groove, five-eighths of an inch wide and near a quarter of an inch deep, rounded at bottom to receive and carry off any wet which may 'work down between the sashes.

But with respect to particular dimensions of frames, they are different according to the plants they are intended to protect, but generally from nine to twelve feet long, from four feet eight inches to five feet wide, from eighteen inches to three feet six inches high in the back, and from nine to eighteen inches in front, being for the most part twice as high in the back as in front, if not more.

The common kitchen garden frames may be of three different sizes, that is, for one, two and three lights, the latter of which however, are the most material, and which are employed for general use: but it is necessary also to have one and two light frames, the former as seedling frames, and the latter as succession or nursery frames, to forward the young plants to a due size for the three-light frames, in which they are to fruit.
.
at 4:00 AM