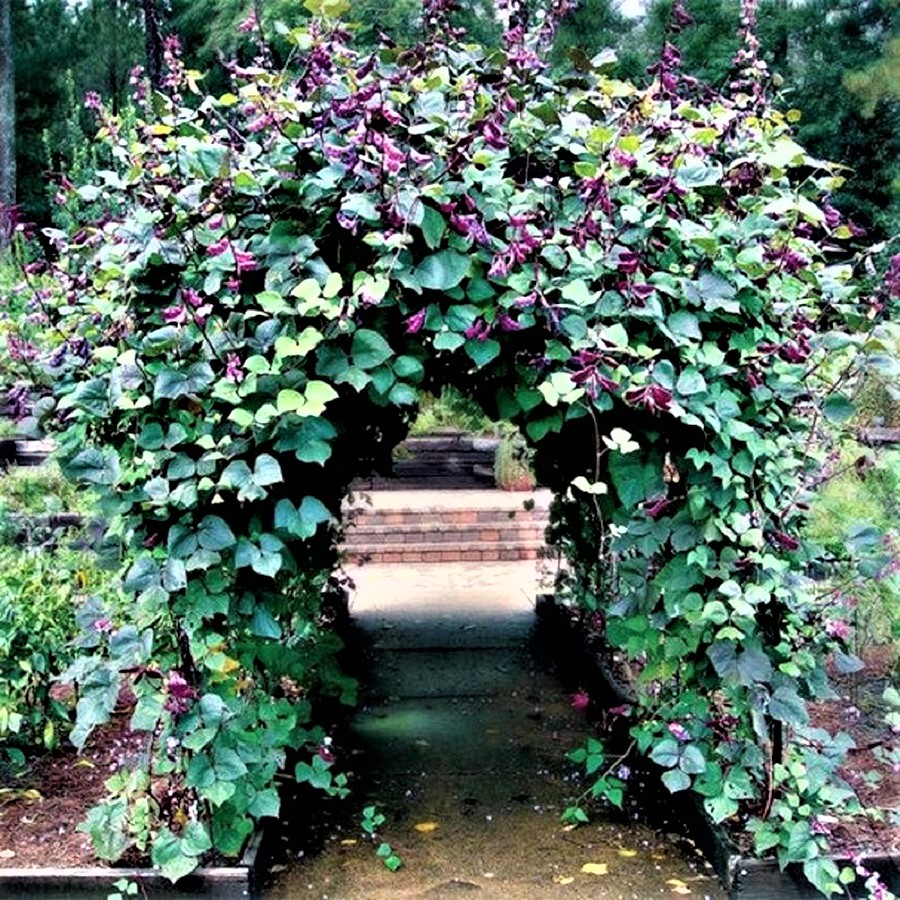 There are a variety of plants that Thomas Jefferson recorded which are intriguing not just because they are unusual or rare or uncommon in the gardens of his time, but also because they lead us to speculate about how they might have been grown. Staking, pruning, & training techniques, for example, are not generally spelled out in his correspondence & memoranda. We wonder how he dealt with those exuberant climbers that grow beyond reasonable bounds, reaching outward & upward toward sun & space.

Plants that sprawl & trail come in many forms: from tender annuals to long-lived woody shrubs. Their allure is often enhanced by a sense of wildness that they bring to an otherwise tame & tidy garden. But, regardless of their many attributes, climbers & ramblers will eventually present a quandary akin to that which is experienced with the likes of zucchinis & baby alligators:"what do you do with them when they grow up?"

Jefferson, in his early conceptual designs for the Monticello landscape, seemed to take a naturalist, laissez-fair approach regarding the native vines & climbing species that he wished to cultivate. In 1771, at the age of 28, he made elaborate plans for the grounds of his Little Mountain, in which he specified that "Jessamine [Gelsemium sempervirens], honeysuckle [Lonicera sempervirens], sweetbriar [Rosa eglanteria], & even hardy flowers which may not require attention" should be interspersed throughout the landscape. His fanciful idea for a grotto at the North Spring included "an abundance of Jesamine, Honeysuckle, sweet briar, etc."

And his plant lists for "The Open Ground on the West—a shrubbery" contained "Climbing shrubby plants—Trumpet flower [either Campsis radicans or Bignonia capreolata]—Jasmine—Honeysuckle." He included the perennial or everlasting pea, Lathyrus latifolius, in his list of perennial flowers & he also added honeysuckle, Jessamine, & poison ivy, Rhus radicans, in his list of trees, suggesting that he considered these plants, which can grow fifty feet or more, to be in the same category as the trees they climbed upon.

Jefferson's vision echoed the British horticultural writer Philip Miller, author of the seminal work The Gardener's Dictionary. In fact, the 1768 edition of this tome resided in Jefferson's library. Miller wrote that such trailing plants, "...should be planted in Large Wilderness-quarters, near the Stems of great Trees, to which they should be trained up; where, by their wild Appearance, they will be agreeable enough."

This idea of allowing ramblers to creep through the shrubbery & encircle the bases of trees was, in fact, pioneered a generation earlier by the influential English landscape writer Batty Langley in New Principles of Gardening (1728). Each of the high-reaching vines Jefferson listed has very desirable ornamental features, such as fragrance, showy flowers of vivid yellow, light lavender, warm cantaloupe-orange, or bright red, &, in the case of poison ivy, brilliant fall color.

In 1807, as Jefferson approached retirement from his 2nd Presidential term, he noted in his Garden Book on April 27 that seeds of the North American clematis, or virgin's bower, Clematis virginiana, were planted "about the 3. springs on & near the road from the river up to the house & at the Stone spring."

Here again, Jefferson's intention to create a scene where the vine tumbles & cascades over the woodland springs with a shower of fragrant, creamy-white flowers resonates with Philip Miller's dictionary entry for clematis in which he wrote: "These may also be planted to cover Seats in Wilderness-quarters, that are designed for shade; to which Purpose these Plants are very well adapted...Stick some Rough boughs ... for them to ramp upon..." 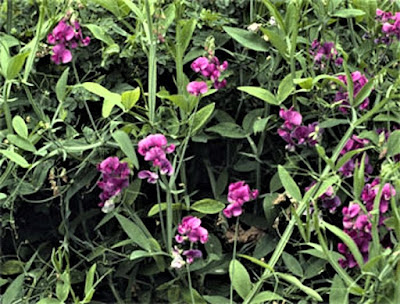 Lathyruslatifolius - Perennial Pea
In the restored Monticello vegetable garden, the most prominent structural feature for supporting climbers is Jefferson's arbor—an enormous twelve-foot-high structure made of locust posts & cedar rails. Jefferson intended this design for his vineyard. 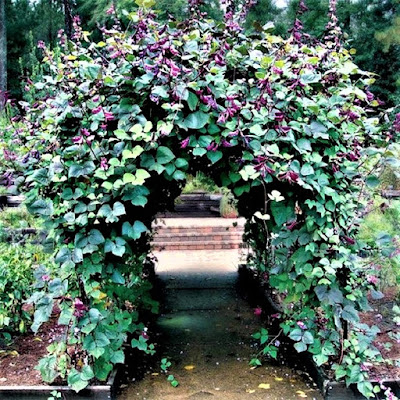 But, we know some type of arbor was used for, according to Jefferson's Garden Book entry for April 17, 1812, "arbor beans white, scarlet, crimson, purple..." were planted. The scarlet runner bean, Phaseolus coccineus—which flowers in white, scarlet, or scarlet & white bicolor forms—was the most likely candidate. It was common in English Gardens both for the kitchen &, as Miller wrote, "...to cover Arbours, & other Seats, in the Summer season, to afford Shade..." But the purple-flowering variety could have been the hyacinth bean, Dolichos lablab (syn. Lablab purpureus).

The Hyacinth Bean, a luxuriant climber covered with rich-purple foliage & deep lavender (or occasionally white) flowers, is one of the most dramatic & eye-catching elements in the Monticello vegetable garden today. From late summer through the first hard freeze the vines' thick, ropy stems twine around the bean arbor &, from the vantage of Mulberry Row overlooking the garden,

Probably the most spectacular vine for the garden arbor is yet another ornamental legume: the show-stopping snail flower or Caracalla bean, Vigna caracalla. Despite its curious common name, Thomas Jefferson justly called it "The most beautiful bean in the world." Philip Miller's Dictionary (1768) described it as: "... a kidney-bean with a twining stalk ... [which] grows naturally in the Brazils, from whence the seeds were brought to Europe." Miller observed further: "It is very common in Portugal, where the inhabitants plant it to cover arbours & seats in gardens, for which it is greatly esteemed ..., for its beautiful sweet smelling flowers."

Since Jefferson's time, fashion has dictated the rise & fall of the Caracalla's popularity. During the 1890s, New York nurseryman Peter Henderson claimed that the bluish-lilac flowers were "valued by florists for their delicious fragrance & for their resemblance to Orchids."

By the early 19C, however, Liberty Hyde Bailey's Cyclopaedia observed, "It is an old-fashioned glasshouse plant in cold climates, but is now rarely seen."

Philadelphia nurseryman Bernard McMahon, who is considered Jefferson's gardening mentor, offered very detailed instructions for staking runner beans & other climbers in his book, The American Gardener's Calendar (1806), another important reference in Jefferson's library. For running kidney beans & Carolina lima beans, McMahon advised the gardener to "place two or three tall poles to each hill for them to climb on." 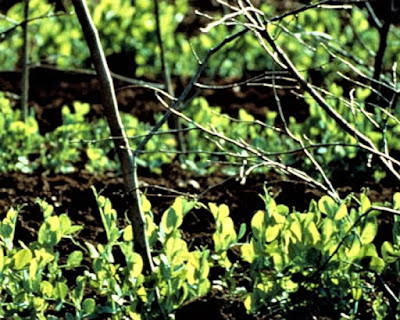 For shorter climbers with tender tendrils, such as English peas, "sticking" has historically been the method of choice. Philip Miller's instructions for his eighteenth-century audience were rather bluntly put: "when the Plants are grown eight or ten inches high, you should stick some rough Boughs, or Brush-wood, into the Ground close to the Peas, for them to ramp upon..."

But McMahon offered greater details & alternative methods for American gardeners in his Calendar (1806): "As to sticking peas, always be careful to have this done when they are about six inches high; ... & if they are double sticked, the better; that is, place a range of sticks on the one side, all in a regular declining manner, & another on the other side of the row declining in an opposite direction to the former, by which, none can fall out on either side." Phillip Miller warned, "Otherwise [the vines] will ramble & trail upon the ground, & appear very unsightly"

The flower gardens at Monticello offer different challenges for displaying climbers in an appropriate style for the period. Eighteenth-century British garden authorities, who often made a big point of what was & was not considered proper in the "Pleasure Garden," deemed that the sticking method was just as acceptable for ornamental plantings of sweet-scented peas, Lathyrus odoratus, as for the edible sorts in the vegetable garden.

Miller discussed the three sweet-pea varieties known at the time, the ones he described as bearing "...purple, white, & 'pale-red' flowers, which is commonly called by the Gardeners, Painted-lady Peas." He continued with the following cultural directions: "Where they are sown for Ornament, there should be six or eight seeds sown in a small Patch, in different Parts of the Borders of the Flower-garden; & ... when they are grown two or three Inches high, there should be some Sticks put down by them to support them; otherwise they will trail on the Ground, & become unsightly; besides they will trail on whatever Plants grow near them." 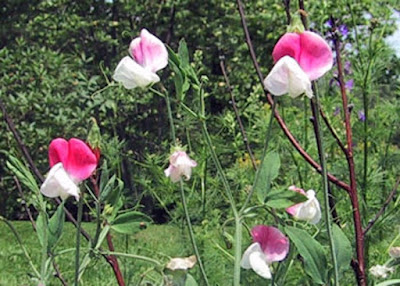 Keeping these climbers contained & reined into the ten-foot long compartments of the winding flower border at Monticello is quite another story. Without the support of a fence, wall, or lattice work, one solution with tolerable results has been simply to use longer pea sticks & to allow the vines to spill over the tops of spring-flowering perennials such as peonies.

Jefferson recorded the planting of the everlasting pea, Lathyrus latifolius, on 2 occasions in his Garden Book. The first planting, mentioned previously, was part of his 1771 scheme for "The Open Ground on the West—a Shrubbery" at Monticello. The 2nd time, it was displayed prominently in an oval flower bed on Monticello's East Front as part of Jefferson's 1807 flower garden plans.

The everlasting pea in Jefferson's shrubbery likely reflected the style of the British wilderness garden, in which Miller wrote: "These plants are very proper to plant against a dead hedge, where they will run over it; & if they be kept train'd up, will cover it in the Summer." With growth to nine feet, the everlasting pea is too tall & lanky for the traditional pea-sticking method. Might the vines have been staked with something more substantial in the oval flower bed?

See: By Monticello's Peggy Cornett in 2010
Research & images & much more are directly available from the Monticello website - to begin exploring, just click the highlighted publication attribution above.
at 4:00 AM