Walls & Fences around The White House in Early America 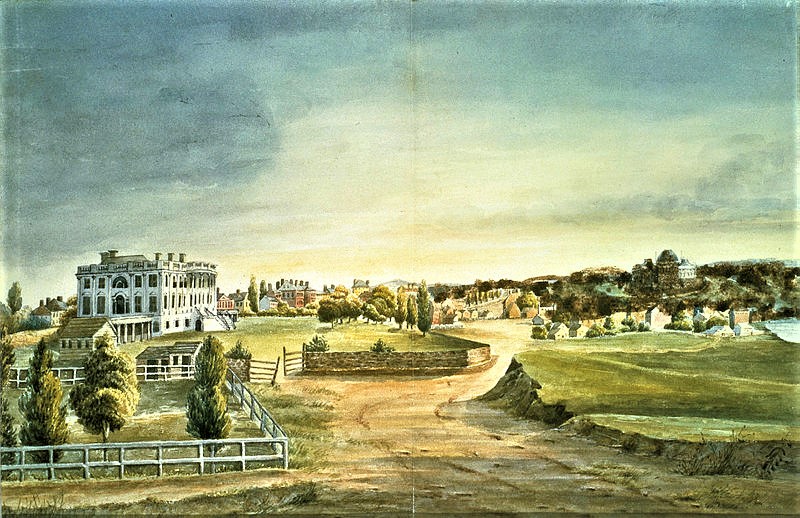 Watercolor of the White House's South Grounds, 1827. This watercolor painted by an anonymous artist, depicts the White House and its grounds from the southwest. The watercolor shows the recently built South Portico, constructed in 1824 during the Monroe administration, Thomas Jefferson’s stone walls, workers’ cottages, an orchard, & President John Quincy Adam's tree nursery.
To expand the grounds around the proposed White House, Washington purchased the land for what is now the South lawn from a tobacco planter named Davy Burns, while the North grounds originally belonged to the Pierce family before falling into the hands of speculators.

1803 White House by Nicholas King in the Huntington Library, San Marino, California. The cornerstone of the President’s House was laid October 13, 1792. When the White House was first occupied in 1800, the site of the South Lawn was an open meadow gradually descending to a large marsh, the Tiber Creek, & to the Potomac River beyond.

The gardens & grounds at the White House evolved slowly as the nation grew. Initially President George Washington (1789–1797) chose French engineer & architect Pierre-Charles L'Enfant (1754-1825) to draw a plan of the city of Washington, envisioning a setting of terraced formal gardens descending to Tiber Creek.

When Washington & L'Enfant mapped out the "President's Park," in 1791, Washington sketched reflecting pools & terraced gardens falling toward the water from an executive palace rivaling Versailles on 82 acres. When finally completed, the White House was about a quarter of the size L'Enfant dreamed of, but gardens would surround the residence.
1792 Pierre Charles L'Enfant, Plan of the City of Washington, March 1792, Library of Congress

After Washington dismissed L’Enfant, the design of the White House was thrown open to an architectural competition in 1792. James Hoban (1758–1831), an Irish-born & trained architect then living in Charleston, South Carolina, won the design competition for the White House. Hoban immigrated to the United States working as an architect & builder in Philadelphia & Charleston, from 1785 until his move to the nation’s capital in 1792.
When John Adams (1797–1801), the 1st President to live in Hoban's proposed mansion, moved into the house in 1800, one Washingtonian wrote that the grounds were "at present in great confusion, having on it old brick kilns, pits to contain water used by the brick makers." 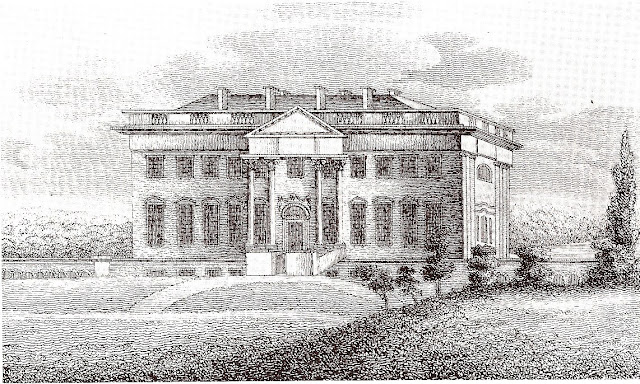 Benjamin Latrobe (1764-1820) noted in 1803, "The surrounding Ground was chiefly used for Brick yards, it was enclosed in a rough post and rail fence." Presidents were faced with a scraggly, unpromising vista of tobacco-depleted clay soil scattered with abandoned workers' cottages bordered by a malarial swamp. The greatest majority of presidential landscaping efforts would be consumed with grading & filling projects throughout the 19C.

In 1801, President Thomas Jefferson (1801-09) began planning improvements for the White House gardens & grounds, including a stone wall around the house. President Thomas Jefferson ordered the construction of a wooden post & rail fence around the White House. By 1808, he had replaced the fence with a stone wall that enclosed the White House Grounds. At the south end of the grounds, a ha-ha wall (a sunken wall that serves as a vertical barrier while providing an uninterrupted view of the landscape) stood to prevent livestock from grazing in the garden. President Jefferson envisioned the South Grounds as a private garden with serpentine walks & a lawn that extended down to Tiber Creek (which runs under present-day Constitution Avenue), edged by a flower border. The North Grounds were to be formal, symmetrical, & open to the public.
Jefferson, who was always arranging & rearranging the grounds at Monticello, was the first president to devise an overall landscape plan for the grounds. The plan included the fence, as well as grading & planting the south grounds for more privacy.
We learn from Margaret Bayard Smith's diary, published in 1906, the Jefferson "was very anxious to improve the ground around the President's House; but as Congress would make no appropriation for this and similar objects, he was obliged to abandon the idea, and content himself with enclosing it with a common stone wall and sewing it down in grass. Afterwards when the Grisly Bears, brought by Capt Lewis from the far west, (where he had been to explore the course of the Missouri,) were confined within this enclosure, a witty federalist called it the President's bear-garden."

Jefferson wanted groves of trees, and he picked the location for the flower garden. Fences & walls were eventually built, where he had specified. He also directed the planting of numerous trees between 1802 -1806.  Smith wrote that "Jefferson's design to have planted them exclusively with trees, shrubs and flowers indigenous to our native soil. He had a long list made out in which they were arranged according to their forms and colors and the seasons in which they flourished. To him it would have been a high gratification to have improved and ornamented our infant City. But the only thing he could effect, was planting Pennsylvania Avenue with Lombard Poplars, which he designed only for a temporary shade, until Willow oaks, (a favorite tree of his) could attain a sufficient size. But this plan had to be relinquished as well as many others from the want of funds."

Jefferson completed grading of the South Lawn, building up mounds on either side of a central lawn, similar to the 100-foot diameter mounds he built at his villa retreat Poplar Forest for his retirement in 1809.

President Jefferson & his surveyor of public buildings, Benjamin Latrobe located a triumphal arch as a main entry point to the grounds, just southeast of the White House. Jefferson's arc of triumph was flanked by two memorial weeping willow trees. “No occupation is so delightful to me as the culture of the earth...but though an old man, I am but a young gardener," he wrote to a friend from his Poplar Forest retreat in 1811. 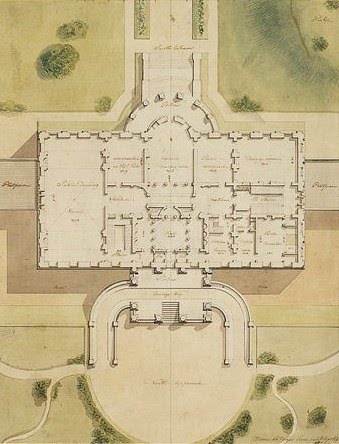 William Stebbins described the grounds around the White House in Washington D. C. in 1810, "Extended my walk alone to the President's house: -- a handsome edifice, tho' like the capitol of free stone: the south yard principally made ground, bank'd up by a common stone wall: a plain picket fence on each side, the passage way to the house on the north: --some of the pickets lying on the ground." 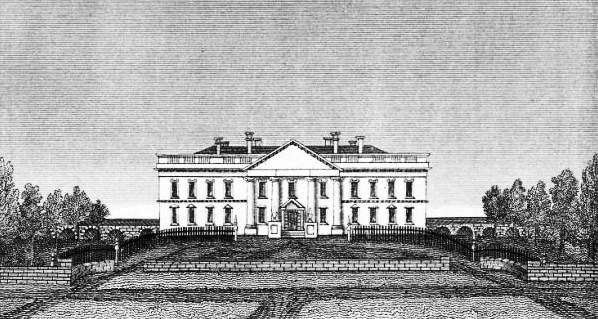 1810 Etching of the White House with stone walls

Hostilities with Great Britain, begun in 1812, culminated in the invasion of Washington on August 24, 1814. British troops entered the defenseless city; ate a dinner prepared for the fleeing President at the White House; and then torched the building, destroying all but the outer walls and most of the plantings. 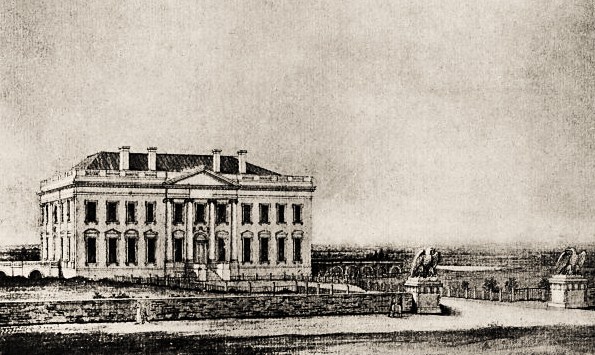 Paul Jennings, President James Madison's (1809–1817) personal slave who witnessed the burning, reports that it was the Madison's White House gardener, and not Dolley Madison who saved the portrait of George Washington from burning with the White House. "When the British did arrive, they ate up the very dinner, and drank the wines, &c., that I had prepared for the President's party." 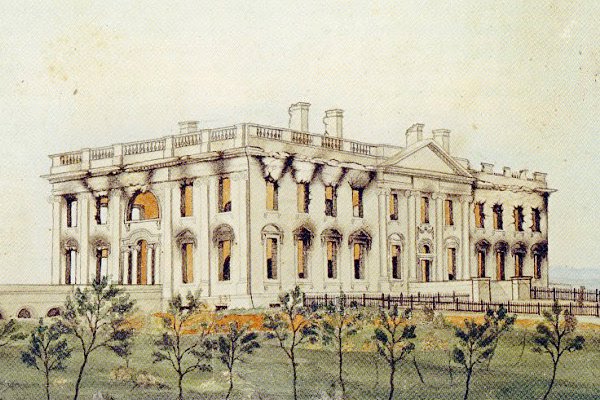 1814 A view of the president's house in the city of Washington after the conflagration of the 24th of August 1814. Library of Congress.
At the urging of James Madison, Congress decided to rebuild rather than move the capital to another city. Hoban returned to reconstruct the President’s House, as it had been before the fire. President James Monroe (1817–1825) moved into a new house in the autumn of 1817.  A new semicircular driveway marked by eight stone piers, an iron fence & gates was built across the North Front of the White House.
While the White House was being rebuilt after the 1814 fire, James Monroe increased tree plantings on the grounds based on plans by architect Charles Bulfinch.
1814 White House on Fire. William Strickland, engraver. Library of Congress.

The front of the White House was used as a common for fairs & parades until 1822, when Pennsylvania the avenue was cut through the north side of the President’s Park & soon after a public park was established.

The federal government used Charles Bulfinch’s (1763–1844) planting scheme for a thick grove of trees for the square north of the White House & named the park in honor of General Lafayette in 1824-1825.
1818 Robert King, A Map of the City of Washington in the District of Columbia, Library of Congress. 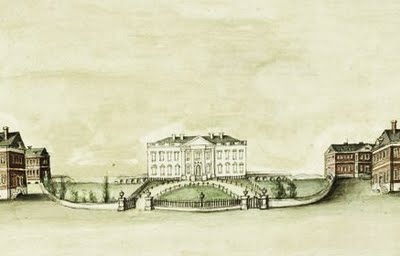 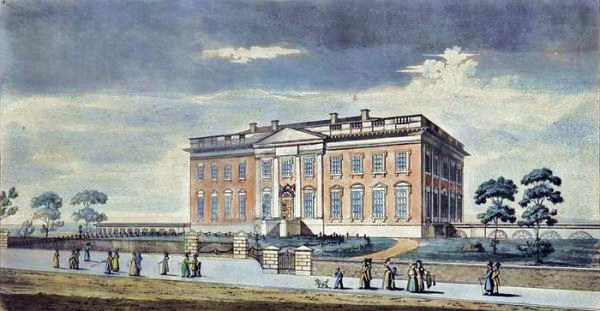 1833 The White House
A long & heavy wrought iron fence was installed along Pennsylvania Avenue on the north side of the White House. Jefferson’s stone wall was cut down along this run & served as the foundation for the new fence. This work was integrated into the existing 1818-1819 semicircular fencing. 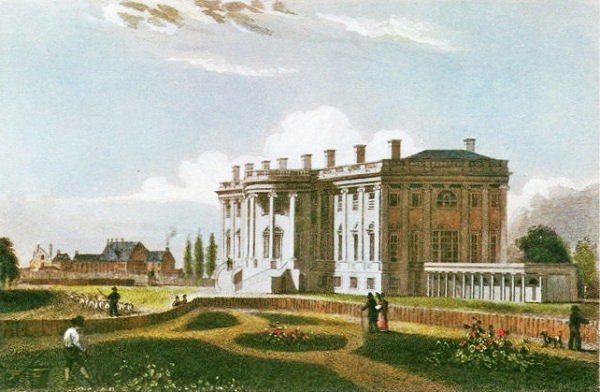 1833 Painted depiction of the south face of the White House. A long & heavy wrought iron fence was installed along Pennsylvania Avenue on the north side of the White House. Jefferson’s stone wall was cut down along this run & served as the foundation for the new fence. This work was integrated into the existing 1818-1819 semicircular fencing.

The famous Jackson magnolias were added to the White House grounds in 1835, which he planted in honor of his wife Rachel, who died shortly before he took office in 1829. The oldest surviving trees on the property now are those two southern magnolias (Magnolia grandiflora) at the east end of what is now the Rose Garden.
About this time, square & rectangular garden beds were no longer in fashion. They could be oval, circle, diamond, star, crescent, or any shape other than a rectangle or square. Walls still remained. 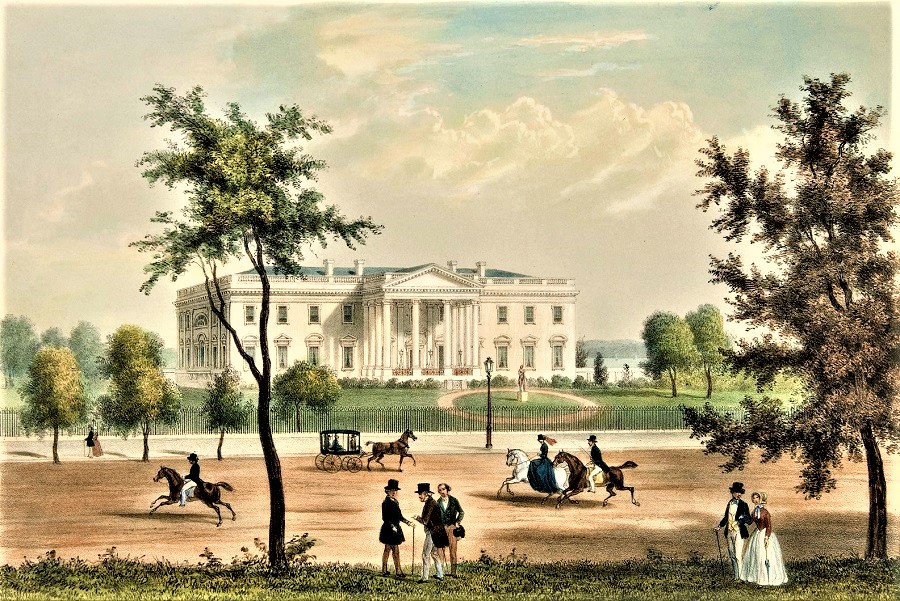 1848 August Kollner (1813-1906) The President's House showing the statue which relocated Jefferson's walls.
In 1873, President Ulysses S. Grant expanded the grounds southward & enclosed them with iron fencing. He also began the policy of closing the grounds at sunset but successive presidents determined their own policy upon taking up residency at the White House.
From its start as a wooden post & rail fence in 1801, the walls & fences around the White House have evolved with the changing landscape of the city of Washington & the security needs of the First Family. In 1893, Grover Cleveland closed the South Grounds after strangers attempted to take photographs with his youngest daughter Esther. In 1901, Theodore Roosevelt briefly reopened the South Grounds, but visitors continued to take liberties with access & tried to photograph & meet with the Roosevelt family, forcing the president to close the South Grounds. In 1913, William Howard Taft restricted access to the North Grounds, only permitting the public to enter on certain days & specific times.
at 4:00 AM