South Carolina Landscape - A 1728 "Meetinghouse" near Jacksonborough in 1799. 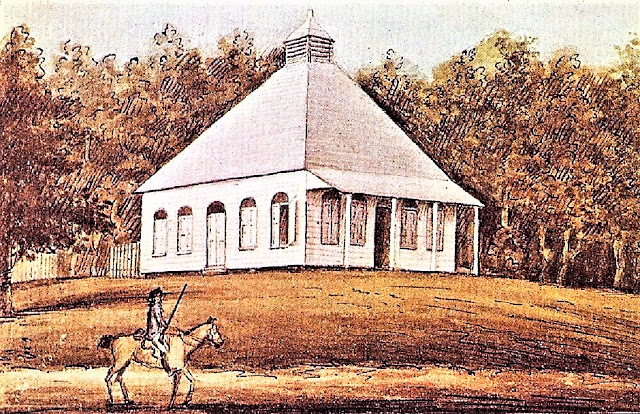 Charles Fraser (1782-1860) A "Meetinghouse" near Jacksonborough in 1799.
"This is the meeting-house of Bethel Congregation of Pon Pon organized in St. Bartholomew’s Parish in 1728 and first ministered to by the Reverend Archibald Stobo, the Father of Presbyterianism in South Carolina. One historian told of Reverend Robert Baron, sent out to St. Bartholomew’s Parish by the Society for the Propagation of the gospel in 1753: “He arrived at Charles Town June 1st and entered on the duties of his cure on the 7th of that month. Mr. Baron was soon after taken ill, and had a severe seasoning, as it is usually called. His Parishioners were scattered over a great extent of country, and were an orderly and well behaved people. The Presbyterians were numerous, but they all lived together in mutual friendship and Christian charity.”
Fraser notes in his Reminiscences, even during his boyhood, the Presbyterian "dissenters" never called their places of worship churches!
at 4:00 AM