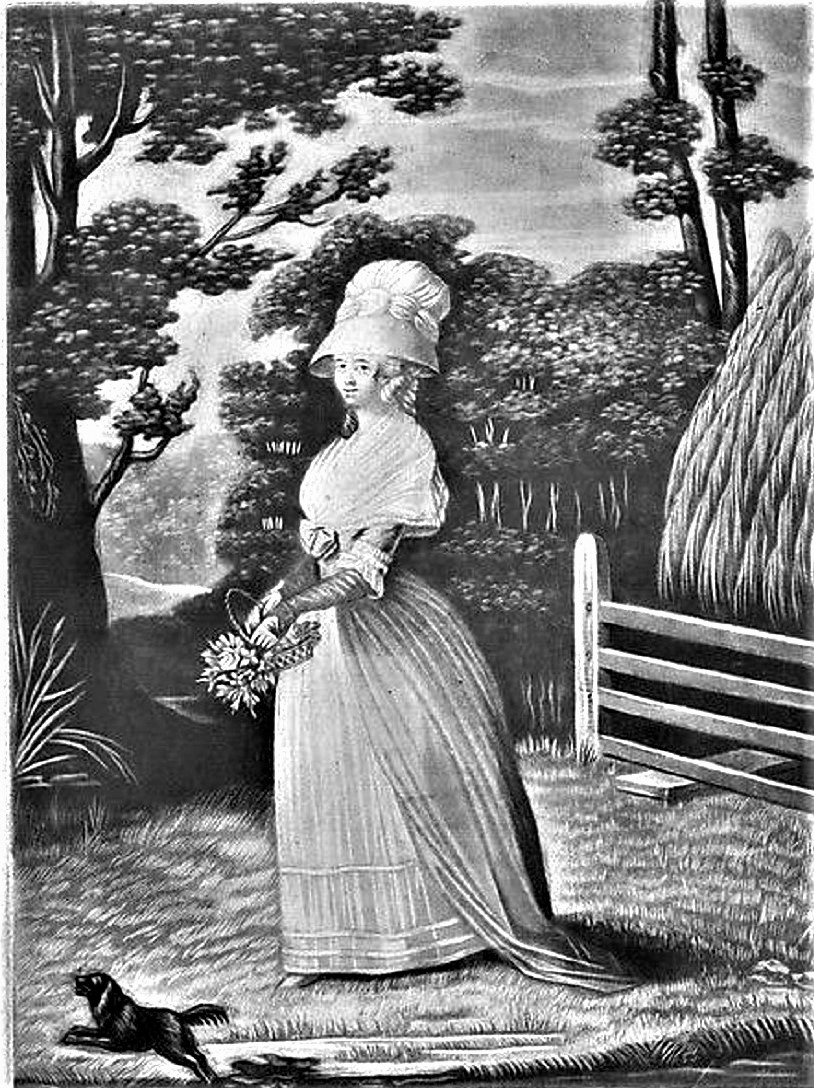 When researching gardens in Colonial America in 2010, I was excited to find the newly published  Diary of Hannah Callender (Mrs Samuel  Sansom) (1737–1801).  She was sort of a bundle of contradictions. She was a well-to-do, proper Quaker from Philadelphia. Her parents William Callender Jr. (1703–1763) and Katharine Smith (1711–1789), devoted members of the Quaker Philadelphia Monthly Meeting. Her father owned a house in downtown Piladelphi & a "plantation" house on the

Although she was a woman, she was well-educated. Her pre-arranged marriage to Quaker Samuel Sansom Jr, (1738/39–1824) was surely no match of love, but she managed to maintain her sassy independence by climbing in her chaise & traveling about the Philadelphia & New York.

After Hannah married, she left her family's mostly agricultural Richmond Seat, set in “a fine Woods,” with an orchard, flower, and kitchen gardens. After the birth of her 1st child, she often set off to visit neighbors. And she wrote down what she saw at the country seats she visited. She kept writing for 30 years, from  age 21 in 1758 through 1788. Along the way, she include little gems describing the gardens & grounds she came upon.

In September of 1758, she briefly noted her visit to James Hamilton’s Bush Hill, “... a party to bush hill. . . in the afternoon, a fine house and gardens, with Statues..."

In June of 1759, Hannah wrote of Bayard’s country seat, near New York, “...took a walk to - Boyard’s Country seat, who was so complaisent as to ask us in his garden. the front of the house, faces the great road, about a quarter of a mile distance, a fine walk of locas trees now in full blossom perfumes the air, a beautiful wood off one side, and a Garden for both use and ornament on the other side from which you see the City at a great distance. good out houses at the back part. they have no gardens in or about New York that come up to ours of philadelphia...”

On that 1759 trip to New York, she wrote “...a good many pretty Country seats, In particular Murreys, a fine brick house, and the whole plantation in good order, we rode under the finest row of Button Wood I ever see...”

As autumn was approaching in 1759, she wrote of Richmond Seat, the country estate & farm of her father William Callender Jr. on the Delaware River in Point-No-Point near Philadelphia, “Morn: 8O'Clock Daddy and I went to Plantation . . . the place looks beautiful. the plat belonging to Daddy is 60 acres square: 30 of upland, 30 of meadow, which runs along the side of the river Delawar, half the uplands is a fine Woods, the other Orchard and Gardens, a little house in the midst of the Gardens, interspersed with fruit trees. the main Garden lies along the meadow, by 3 descents of Grass steps, you are led to the bottom, in a walk length way of the Garden, on one Side a fine cut hedge incloses from the meadow, the other, a high Green bank shaded with Spruce, the meadows and river lying open to the eye, looking to the house, covered with trees, honey scycle vines on the fences, low hedges to part the flower and kitchen Garden, a fine barn. Just at the side of the Wood, the trees a small space round it cleared from brush underneath, the whole a little romantic rural scene.”

In 1761, she visited the Moravian settlement at Bethlehem, PA, “... Sister Garrison with good humour gave us girls leave, to step cross a field to a little Island belonging to the Single Bretheren, on it is a neat Summer house, with seats of turf, and button wood Trees round it.”

In the summer of 1762, Hannah described the estate of the late Tench Francis Sr. "... the House stands fine and high, the back is adorned by a fine prospect, Peter’s House, Smiths Octagon, Bayntons House &c and a genteel garden, with serpentine walks and low hedges, at the foot of the garden you desend by sclopes to a Lawn. in the middle stands a summer House, Honey Scykle &c, then you desend by Sclopes to the edge of the hill which Terminates by a fense, for security, being high & almost perpendicular except the craggs of rocks, and shrubs of trees, that diversify the Scene.” 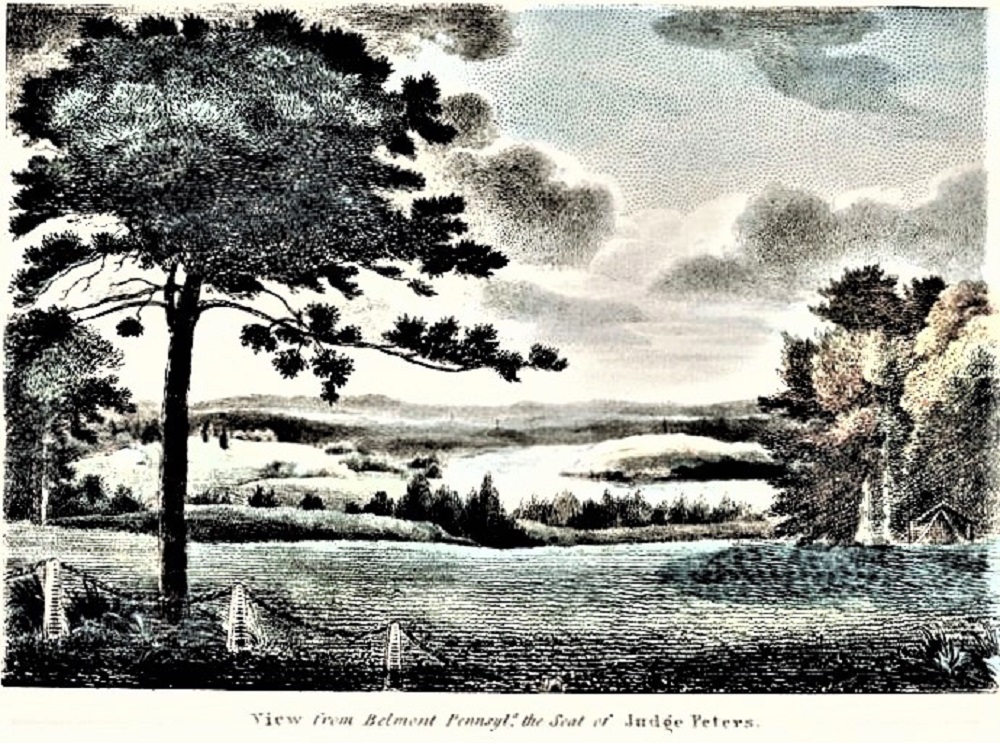 William Russell Birch, “View from Belmont Pennsyl.a the Seat of Judge Peters,” in The Country Seats of the United States (1808),

She was drawn to the estates high above the Schuylkill River. Another 1762 jaunt took her to William Peter's Belmont, “. . . went to Will: Peters’s house, having some small aquaintance with his wife who was at home with her Daughter Polly..."from the Front of this hall you have a prospect bounded by the Jerseys, like a blueridge, and the Horison, a broad walk of english Cherre trys leads down to the river, the doors of the hous opening opposite admitt a prospect the length of the garden thro' a broad gravel walk, to a large hansome summer house in a grean, from these Windows down a Wisto terminated by an Obelisk, on the right you enter a Labarynth of hedge and low ceder with spruce, in the middle stands a Statue of Apollo, note: in the garden are the Statues of Dianna, Fame & Mercury, with urns. we left the garden for a wood cut into Visto’s, in the midst a chinese temple, for a summer house, one avenue gives a fine prospect of the City, with a Spy glass you discern the houses distinct, Hospital, & another looks to the Oblisk.”

Belmont long remained one of Hannah's favorite sites. Twenty-three years later, she again described  Belmont, now Richard Peters, “the highest and finist situation I know, its gardens and walks are in the King William taste, but are very pleasant.” 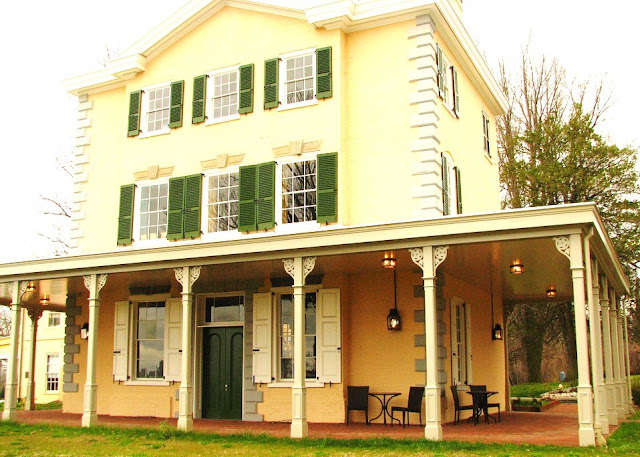 Recent photo of Belmont Mansion in Fairmount Park in Philadelphia. Belmont is now the home of the Underground Railroad Museum.

In 1768, she wrote of Edgely, the country seat of Joshua Howell, “...went to Edgeley. Joshua Howel has a fine Iregular Garden there, walked down to Shoolkill, after dinner. . . walked to the Summer House, in view of Skylkill when Benny Played on the flute.”

In 1785, she also revisited Belmont, “...crossed Brittains bridge, to John Penns elegant Villa, passed a Couple of delightfull hours, mounted our chaise and rode a long the Schuilkill to Peters place the highest and finist situation I know, its gardens and walks are in the King William taste, but are very pleasant..."

Hannah & her husband maintained a residence in Philadelphia & one in the country called Parlaville, a suburban retreat located about 2 1/2 miles north of the city on the banks of the Schuylkill River. Hannah Callender Sansom and Samuel Sansom and their family lived in Philadelphia but often visited their country retreat at Parlaville.  In 1785, they planned new landscaping & gardens for Parlaville with a "...brick mansion, with a piazza & back buildings, together with a stone coach and stabling, ans a garden to the west and an inclosed lawn to the south..."

Here her family could go skating, sledding, take country walks and drives, garden, and have pet dogs. Hannah wrote “rose blythly to sow my seeds” called gardening “the primitive occupation of man, designed by the almighty for a happy life!” During the spring of 1785, Sansom obtained a “variety of Trees, flowers, and plants” for Parlaville, “went nine miles up Schuikill for white pine trees.” Several days later she acquired “two Tuby Rose [tuberose] roots...”  The year she stopped writing her diary was the year her first grandchild was born.