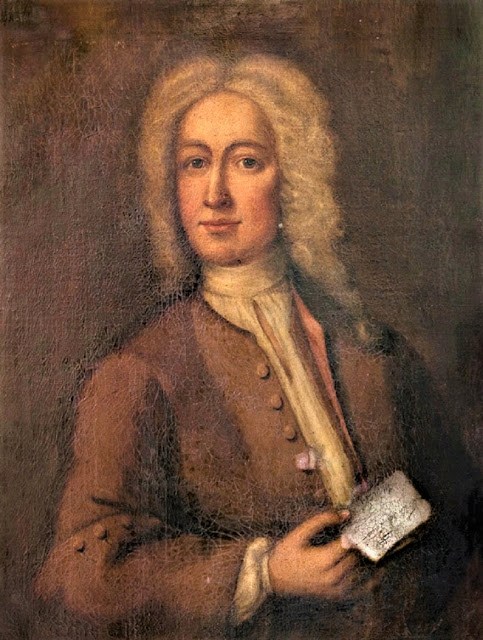 English plant hunter and naturalist John Lawson (1674-1711) wrote in 1700-1709, "The Town has very regular and fair Streets, in which are good Buildings of Brick and Wood...This Colony was at first planted by a genteel Sort of People that were well acquainted with Trade, and had either Money or Parts to make good Use of the Advantages that offer’d, as most of them have done by raising themselves to great Estates...and...considerable Fortunes...They have a considerable Trade both to Europe and the West Indies, whereby they become rich and are supply’d with all Things necessary for Trade and genteel Living."

John Lawson was an explorer, plant collector, surveyor, and author of A New Voyage to Carolina (London, 1709). A London botanist and apothecary, James Petiver (1658-1718), was seeking someone to collect American plant specimens for him, and Lawson volunteered to do this without charge. Thirty of the South Carolina plant specimens that he sent still survive in the Sloane collection at the British Museum. Hans Sloane (1660-1753) was a friend of Petiver. Sloane amassed a huge collection of plants, animals, and objects which became the founding core of the British Museum and Natural History Museum in London.

John Lawson describes his first impressions of Charles Town and the colony of Carolina,  where he would spend eight years studying the plants, animals, and peoples of the region.

After a Fortnight’s Stay here [New York City], we put out from Sandyhook, and in 14 Days after arriv’d at Charles-Town, the Metropolis of South Carolina, which is situated in 32 [degrees] 45 [minutes] North Latitude, and admits of large Ships to come over their Bar up to the Town, where is a very commodious Harbour, about 5 Miles distant from the Inlet, and stands on a Point very convenient for Trade, being seated between two pleasant and navigable Rivers.

The Town has very regular and fair Streets, in which are good Buildings of Brick and Wood, and since my coming thence, has had great Additions of beautiful, large Brick-buildings, besides a strong Fort, and regular Fortifications made to defend the Town. The Inhabitants, by their wise Management and Industry, have much improv’d the Country [colony], which is in as thriving Circumstances at this Time as any Colony on the Continent of English America, and is of more Advantage to the Crown of Great Britain than any of the other more Northerly Plantations (Virginia and Maryland excepted).

This Colony was at first planted by a genteel Sort of People that were well acquainted with Trade, and had either Money or Parts to make good Use of the Advantages that offer’d, as most of them have done by raising themselves to great Estates and considerable Places of Trust and Posts of Honour, in this thriving Settlement. Since the first Planters, abundance of French and others have gone over and rais’d themselves to considerable Fortunes. They are very neat and exact in Packing and Shipping of their
Commodities, which Method has got them so great a Character [reputation] Abroad that they generally come to a good Market with their Commodities; when oftentimes the Product of other Plantations are forc’d to be sold at lower Prices. They have a considerable Trade both to Europe and the West Indies, whereby they become rich and are supply’d with all Things necessary for Trade and genteel Living, which several other Places fall short of. . .

Their Roads, with great Industry, are made very good and pleasant. Near the Town is built a fair Parsonage-house with necessary Offices, and the Minister has a very considerable Allowance from his Parish. There is likewise a French Church in Town of the Reform’d Religion [French Protestants] and several Meeting-houses for dissenting Congregations who all enjoy at this Day an entire Liberty of their Worship, the Constitution of this Government allowing all Parties of well-meaning Christians to enjoy a free Toleration and possess the same Privileges, so long as they appear to behave themselves peaceably and well ⎯ It being the Lords Proprietors’ Intent that the Inhabitants of Carolina should be as free from Oppression as any in the Universe, which doubtless they will if their own Differences amongst themselves do not occasion the contrary.
at 4:00 AM