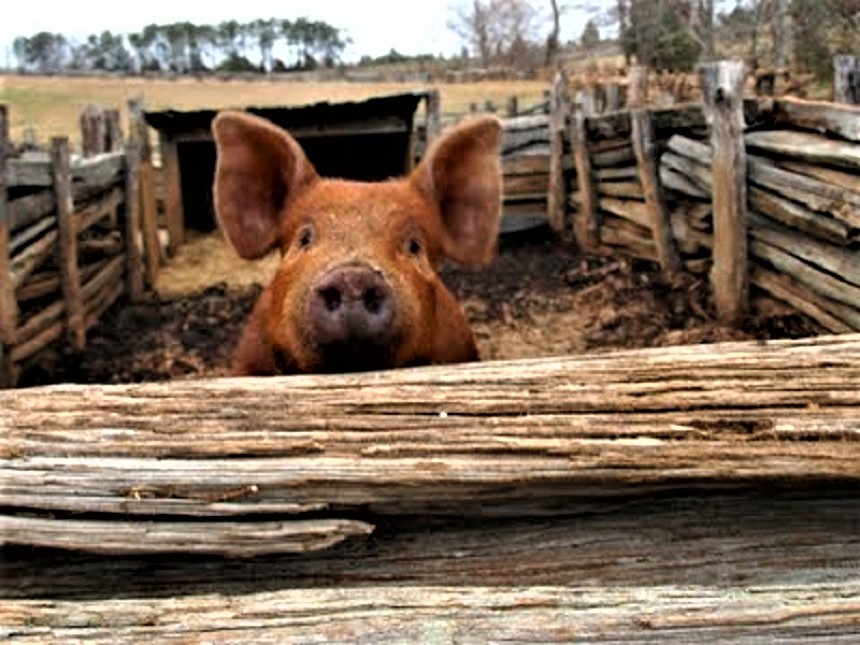 Livestock Yards
The term barn yard was used in the British American colonies by the 1760s. In 1766 Pennsylvania, a parcel of land was offered for sale with "a fine run running through the barn yard." Barnyards were almost always fenced, but this did not ensure that your animals would be safe.
In 1771, Pennsylvanian Mordecai Cloud reported that his brown mare was stolen "out of the barnyard of the subscriber, in East Caln township, Chester county." Just a few months later, a black horse was "STOLEN out of the barnyard of the subscriber, living on Bread and Cheese Island, in Mill creek Hundred, New Castle county" Delaware.

Near Savannah, Georgia, in 1774, property was advertised, "choice Tide Land, on which are Two fine high Knolls fit for Buildings and Barn Yard."
Near 1778 Philadelphia, a soldier was said to have made his escape, "by getting over a fence in the barn yard."
The term farm yard was seldom used until well after the Revolutionary War. It came into popular use after the 1790s publication of John Spurrier's "Compendious System of Husbandry, adapted to the different soils and climates of America; containing the mechanical, chemical and philosophical elements of agriculture; wherein the different soils and manures are analized, shewing their real properties, with their proper applications to each other, and the atmospherical influences; the best method of constructing and managing the farm-yard." John Beale Bordley's publication of "Sketches on Rotations of Crops, and other Rural Matters" also popularized the term.

In the late 1790s, Isaac Weld reported on a house at Lake Charles, near Quebec, "The dwelling house, a neat boarded little mansion painted white, together with offices, were situated on a small eminence; to the right, at the bottom of the slope, stood the barn, the largest in all Canada, with a farm yard exactly in the English style."
Cow Yard

A 1751 advertisement in the Pennsylvania Gazette described a plantation in Burlington fronting the Delaware River for 3/4 of a mile with 208 acres containing "a Dairey house, coach house, chaise house, a fine stable, a large barn, barrocks, hovels, a well in the cow yard." 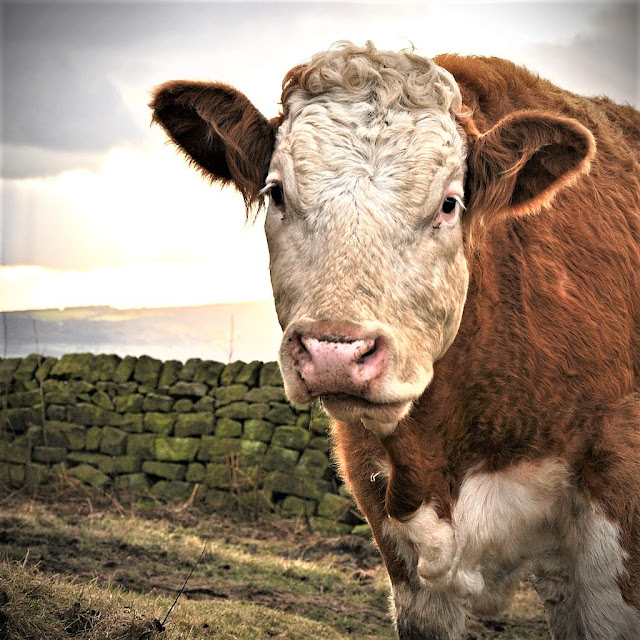 "A good cow yard, fenced with stone."
In 1756, the same newspaper noted in New Jersey, "Commodious plantation, well watered and timbered, about four miles from Trenton, on the great road leading to Amwell, containing 236 acres, or thereabouts, of good land, with a good house, and a good cow yard, fenced with stone."
Twenty years later, Pennsylvania Gazette land-for-sale in Newgarden, Chester County, Pennsylvania was described as a plantation of "112 acres...a two story square log house, with a cellar under, a well of good water at the door, a barn, with stabling and cow yard."

An 1800 newspaper noted that behind a house for sale in Savannah, Georgia, was "a garden 34 by 45 feet, a cow yard 20 by 15 feet."
Fertilizer
The cow yard, pig yard, or barn yard was not just a pen for livestock, it was a hotbed of fertilizer production for the gardens & grounds of most industrious landowners in the colonies & early America. 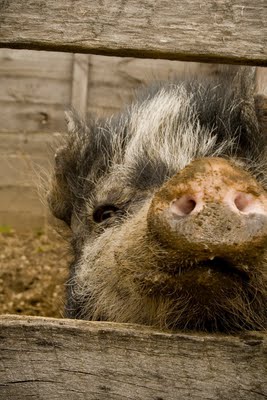 Joseph Prentis (1754-1809), a judge of the General Court of Virginia, lived in Williamsburg, and wrote in his Monthly Kalender between 1775-1779. It survives as a manuscript at the University of Virginia. He noted in his Kalender, "Dung your Grounds. Such of the Garden as may be vacant should be well manured in October and also well spaded that it may have the advantage of fallow from the sun, snow, and air of the winter season...In December use every oppy of laying Dung on such parts of the Garden as may want it." 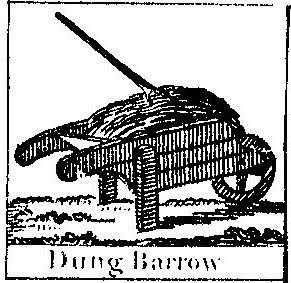 In Annapolis, Maryland, during the 1790s, clockmaker & silversmith William Faris planted most of his kitchen garden near his stables. Faris consistantly carted dung from his own stables to his garden, and he employed neighborhood haulers to bring extra cartloads of "tan" to his garden throughout the growing season into the fall.
Hog Yard

The Pennsylvania Gazette recommended creating a hog yard as a means of increasing manure to be used as fertilizer in March of 1791. "Adjoining the stye where your swine are shut up, which should be dry & warm, fence a yard for them to wallow in; 20 or 30 feet square will be large enough for 6 hogs; cover this in the fall or spring with mud...The hogs... will render this mud or earth, if not more than 2 feet deep, an exceeding rich compost in a year's time.

"They will keep it stirring & fermenting with their dung & urine, which will be incorporated with the mud, and thereby their whole strength will be saved; for the mud or earth will prevent the virtues of the dung & urine from being washed in the ground by the heavy rains, or evaporated by the sun and air --- it not only saves them, but makes them stronger, by keeping them in a state of constant fermentation; the fermentation will be increased, and the whole mass will be improved by making this yard the receptacle for the weeds of your garden --- throw into it your soap-suds, brine, and all the greasy slop of the kitchen; you may add potatoe-tops, which should be carefully saved for the purpose when you gather the potatoes; the stubborn corn stalks, which rot slowly in the cow-yard, will soon consume in the hog-yard." 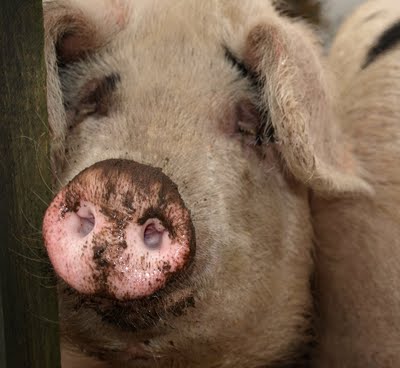 New Yorker John Nicholson wrote about barnyards in The Farmer's Assistant in 1820, "The practice of having a barnyard on a declivity is a bad one, as in this way very much manure is washed away, without essentially benefiting the adjoining grounds. The yard should be level, and lowest in the middle, in order to prevent the escape of much fertilizing liquor, that will otherwise run off from the dung during heavy rains. 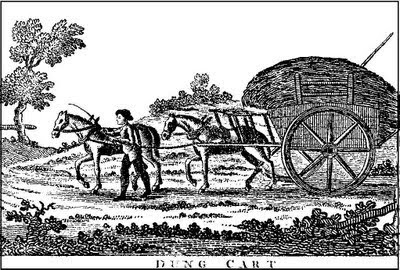 "It should be cleared in the Spring of the dung made during Winter; and if the Milch-cows and other cattle are to be kept in it at night, during Summer, much manure may be made in it by carting in rubbish of various kinds...to mix with the dung of the cattle and absorb their stale.

"The yard should also have a high close fence round it, as well for securing the cattle as for breaking off the winds; and, in order to make the most of the dung, the cattle should be kept constantly in the yard during the season of foddering, and have a well close adjoining to supply them with water."
at 4:00 AM