Gardeners appear in South Carolina records in a variety of ways--deeds, estates, administration records, and newspapers. Often, the identification "gardener" is all that is available about these men. They don't place ads seeking work or advertising plants, but they should not be ignored. 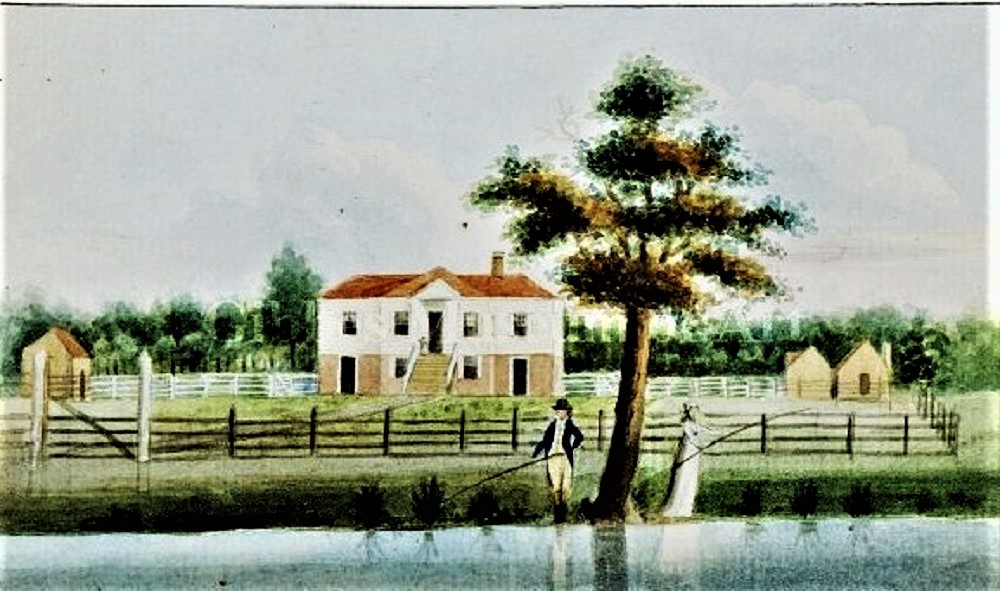 1796. Charles Fraser (1782-1860). The Seat of Joseph Winthrop, Esq. on Goose Creek, South Carolina. The Carolina Art Association Gibbes Museum of Art, Charleston, South Carolina. Joseph Winthrop was married to Charles Fraser's older sister.  Thanks to South Carolina native Charles Fraser (1782 - 1860 ) we have a chance to see, through his eyes, the homes & gardens there as he was growing up. These were some of the gardens & grounds, that the independent gardeners listed here helped plant & tend. Although Fraser was primarily known for his miniature portraits, he created watercolors of historical sites, homes, & landscapes, while also working as a lawyer, historian, writer, & politician. Today, many of Fraser's works are housed & displayed in Charleston's Carolina Art Association Gibbes Museum of Art.

The first professional gardener on record in South Carolina was a Frenchman. Mathurin Guerin was a French Huguenot who took refuge in the province and requested to be naturalized as an English citizen under the act passed on March 10, 1697, designed to grant to all aliens that were inhabitants of the Province of South Carolina the same privileges as those persons born of English parents. Mathurin Guerin was a native of St. Nazaire, son of Pierre Guerin, and of Jeanne Bilbau. His wife was Marie Nicholas, daughter of Audre Nicholas and Francoise Dunot. 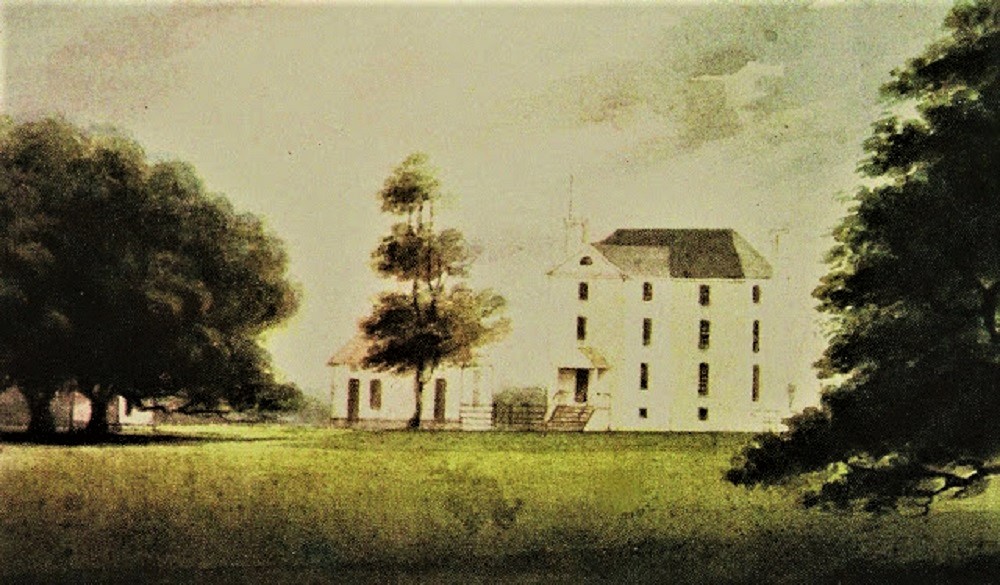 1803. Charles Fraser (1782-1860). Ashley Hall near Charleston, South Carolina.The Carolina Art Association Gibbes Museum of Art, Charleston, South Carolina. Fraser wrote in his Reminiscences that the oak trees were planted by a "visitor," Mark Catesby, who came to Carolina in 1722, and whose Natural History of Carolina, Florida, and the Bahama Islands was published in England a decade later. 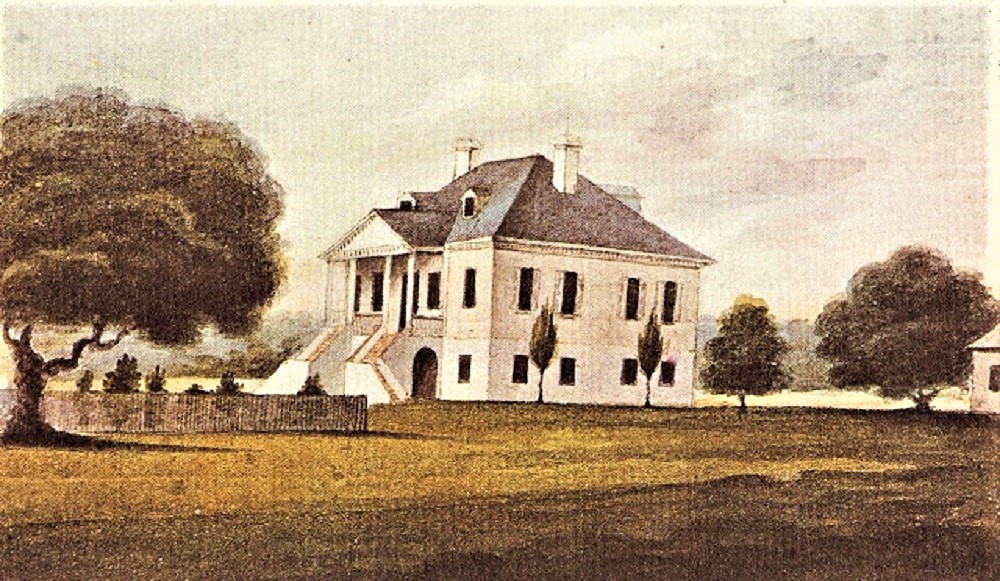 Charles Fraser (1782-1860). A Seat on the Ashely River, April, 1802. Carolina Art Association The Carolina Art Association Gibbes Museum of Art, Charleston, South Carolina. This house is typical of much South Carolina & West Indies plantation architecture which have a basement story of masonry and upper floors of wood. The double stairway to the semi-classic porch is also very characteristic of this architecture.

South Carolina’s next gardener of record was Bartholomew Garret who was dead in 1719, when his widow Elizabeth (Major), originally of London, declared her “love and affection” for Thomas Hayward of Charleston. 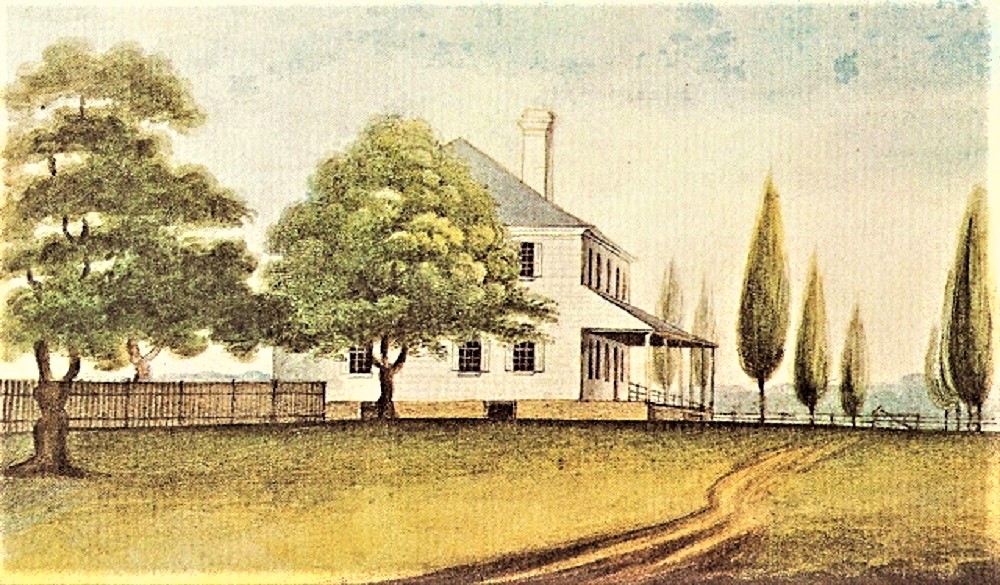 In the South Carolina Gazette of May 12, 1757, Henry Middleton placed a notice to settle the estate of his deceased gardener, George Newman.

The only knowledge of gardener Robert Hunter comes from his June 15, 1767 notice in the Gazette, "NOTICE IS HEREBY GIVEN THAT frequent and repeated trespasses have been committed, at Mr. Daniel Cannon’s garden, up-the-Path, This is therefore to inform and forwarn all persons whatsoever, for the future, as they must expect to answer the consequences by a gun, or dog, or both. ROBERT HUNTER, Gardener." 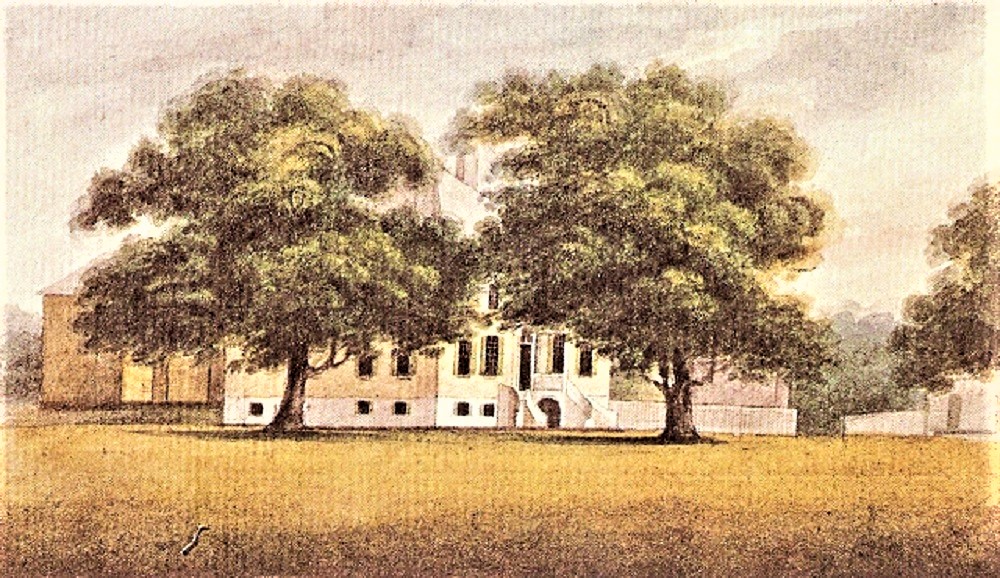 Peter Boutiton was a feisty French gardener who also signed his name Pierre. He was active in the Charleston area from 1776, until his death in 1783. He married he widow Mary Air on January 9, 1777 at St. Philip’s. Mary Air was the granddaughter and heir of Charleston merchant, Peter Benoist. On July 21 of that year he placed the following notice in the Gazette of the State of South Carolina in Charleston, "PETER BOUTITON, Gardener, near and wit in the town gate, having suffered…frequent robberies of the produce of his hard labour, and greatly also by loss of rest, is watching by himself and two negroes, and frequent firing of guns, with no other intent than to deter the thieves-which not having answered his purpose-He now gives public notice and warning. That whoeverhereafter shall presume to enter his inclusures in the night, must do it at the risk of their lives.” Boutiton was identified as having been a gardener in Charleston during the settlement of his estate in 1783 ,and in South Carolina court records for several years thereafter. 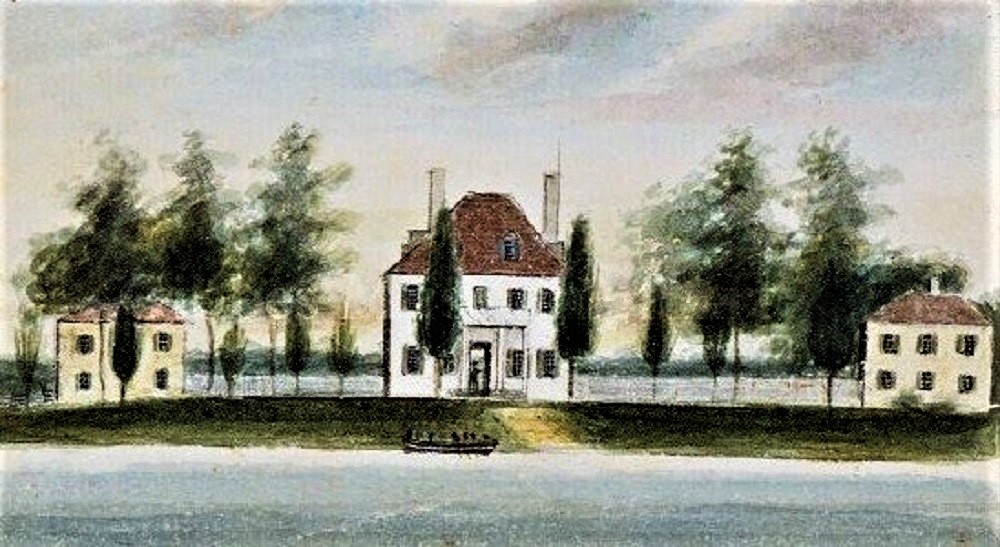 Anthony Farasteau was another French gardener. His was alternately listed as a gardener and a weaver in several land transactions and at the settlement of his estate, in the Charleston papers. He was active in Charleston records from 1776, until his death in 1785. Weavers often were also gardeners who grew their own dye plants. Charles Gross was listed as a gardener in the 1790 Charleston City Directory at 152 King Street. He moved to Hampstead in 1792-1793 and began to garden and sell seed from there, until he died in 1802. Englishman James Sommers appears in the settlement of his estate after his death in 1794 as having been a gardener in Charleston. In his will he mentions being from Ilfondcombe in the County of Devon in England.

The will of gardener Robert Johnston noted that he came from Greenwill Street, Newtownards, Ireland, where he owned a house and land. Morris Conner was a gardener from St. Bartholomew’s Parish who died in testate in 1795. Elisha Diven was a gardener in Charleston in the same era. He is identified as a gardener in a 1797 estate proceeding and at his own death in 1798. 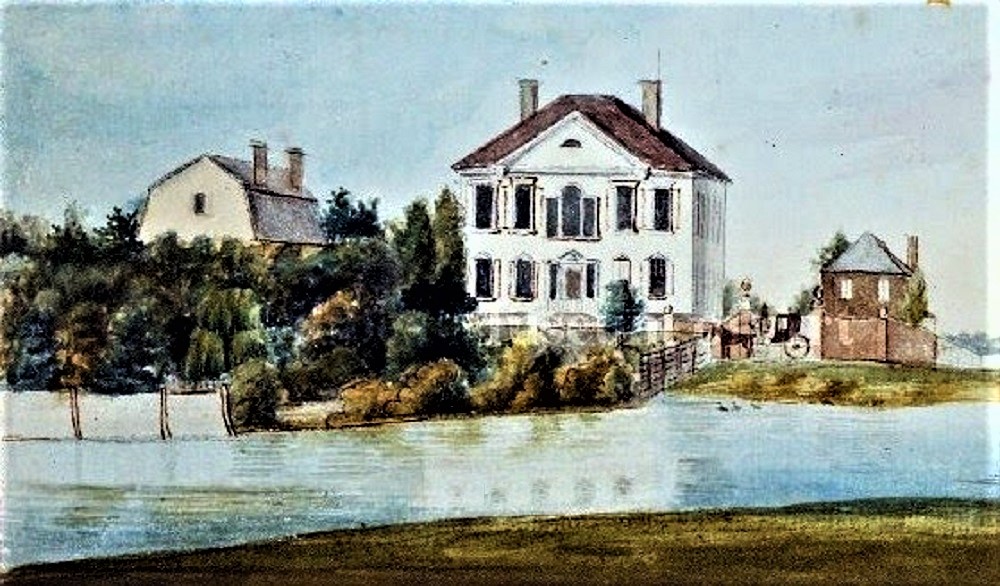 1796. Charles Fraser (1782-1860). A View of Mr. Lindsay's in Charleston, South Carolina, Taken from Savage's Green. The Carolina Art Association Gibbes Museum of Art, Charleston, South Carolina. In Fraser’s Reminiscences he states, “There was Savage’s Green at the lower end of Broad Street, which, until the building of the old Theatre, was entirely vacant, and spacious enough to be used for military exercise. The old battalion often paraded and fired their pieces there.” Fraser remarks that the end of Savage’s Green was a favorite swimming place for boys. Across the creek from the Green “was the town house of Mr. Thomas Ferguson, a large planter of the Parish of St. Paul, and a prominent leader of the Revolutionary party.. His house in Charles Town long bore the mark of a British cannon ball fired into the town in 1780.”

George Smith was a Charleston gardener who was born in Wicklow, Ireland, in 1784. He immigrated sometime before his 1810 Charleston marriage to Margaret Morgan in 1810. James Mair was a gardener who was born in Scotland in 1772. He immigrated to Charleston, and went into partnership with Robert Brown of Beaufort until 1801. He owned 779 acres of land on John’s Island and was listed in the 1809 Charleston City Directory as a gardener operating on King Street. He married Martha Graham, the youngest daughter of the then deceased Rev. William Graham in January of 1805, and he died in September of 1809. He was in partnership, until his death, with James Fraser, son of John Fraser, seedsman, nurseryman, and botanist of London. 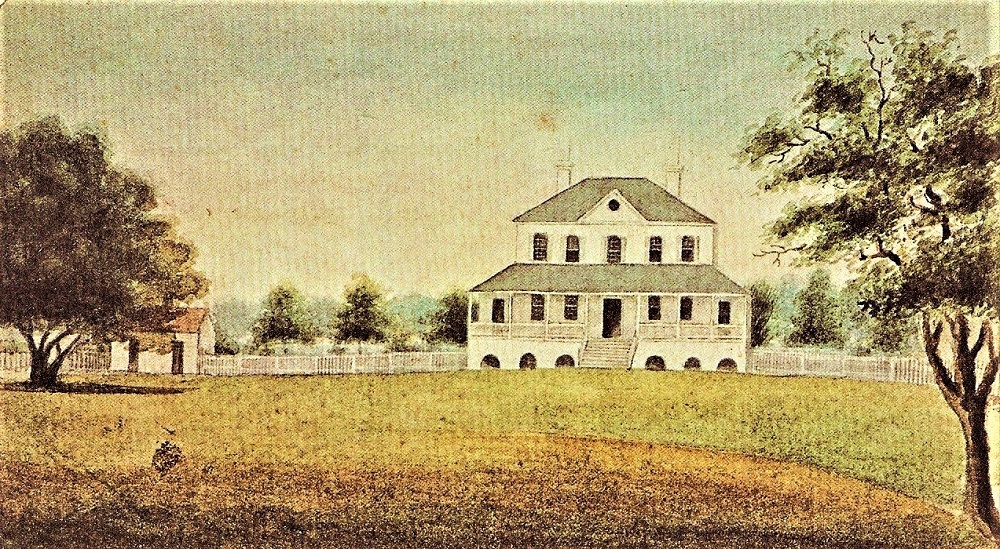 Charles Fraser (1782-1860). The Seat of John Julius Pringle, Esq. on Ashley River, 1800. The Carolina Art Association Gibbes Museum of Art, Charleston, South Carolina. When the land was bought by John Julius Pringle in 1795, the Duke de la Rochefoucault Liancourt spent some time with him in Charleston. He wrote of a trip up the Ashley River to the new property, “We crossed the River, and stopped at a plantation lately purchased by Mr. Pringle, the former name of which was Greenville, but which he has named ‘Susan’s Place’ in honour of his lively wife…The new mansion…will be finished this summer.”

Samuel Anderson was also listed as a gardener of Hampstead in the Charleston City Directory and appeared in several Charleston County land transactions from that time on.

And Daniel A. Stark was a gardener with wanderlust who preferred not to walk, according to a notice in the Charleston Times on April 19, 1819. "Caution. A MAN, who said his name was DANIEL A. STARK, and had been working as a Gardener for Mrs. Kennedy, at Gordon & Spring’s Ferry, absconded on Wednesday week last, taking with him a Gun, Shot-Bag and Powder-Flask; and on the next day a Horse belonging to Mrs. K. was missing."

Robert DuBois (1740-1823) who was also listed as a gardener in the 1809 Charleston City Directory, working out of King Street. At the time of his 1823 will, he was living at Charleston Neck in the forks of the road of King Street.

James Waddell was another South Carolina gardener and weaver originally from Ireland. He and his wife Ann, the widow of Benjamin Wood, appear in 1783 and 1785 estate matters. In 1798 and 1799, they appear in land records as residents of Charleston Neck and members of Christ Church parish. In 1804, Waddell conveyed 1,082 acres he owned on John’s Island. The City Gazette in Charleston on June 5, 1823 reported his death.

Marmaduke Jenny was identified as a gardener “late of Charleston and the village of Washington” when he died in 1821.

Joseph Parsons (c1743-1823) was also listed as a gardener on Hampstead in the 1809 and 1813 Charleston City Directories. Parsons was born in Henrico County, Virginia. He married Alcey Goolsby in 1763 in Laurens, South Carolina, and served as an Indian spy in the Revolutionary War.

Joseph Parsons appeared in the records as a gardener in 1807, as the husband of Esther, the widow of Conrad Hook, a carpenter. They appeared in land records; until his death in 1823. His obituary in the City Gazette in Charleston on April 23, 1823 read, “Died, in the city on Monday, the 7th inst. after a long illness, Mr. Joseph Parsons, aged 40 years, formerly of Wiscasset, but for the last 20 years a resident of this state.” When he died, they were living in Hampstead “near Mr. Nell’s Rope-Walk.”. 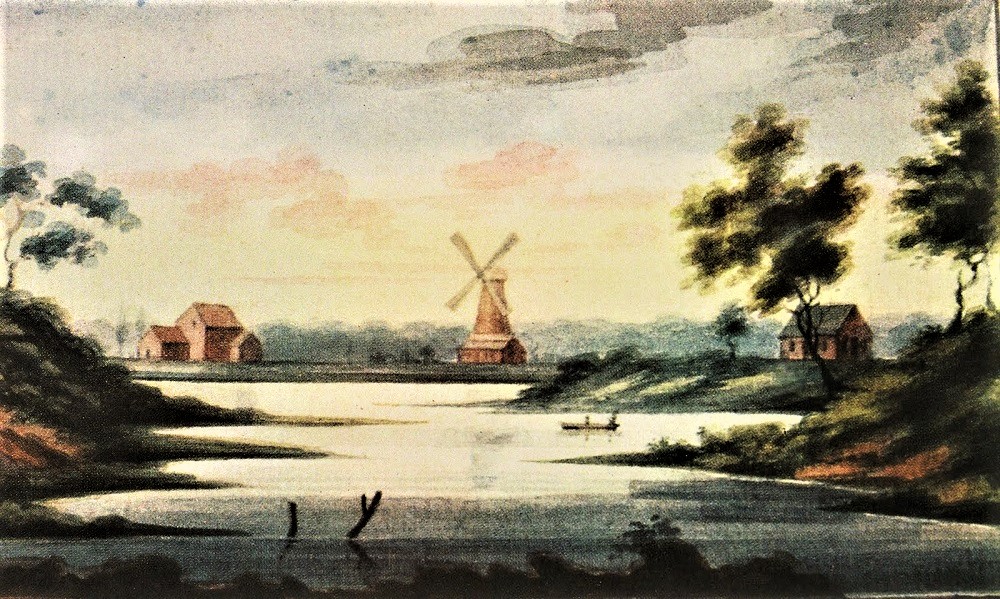 1802. Charles Fraser (1782-1860). A View Near Charleston, South Carolina. The Carolina Art Association Gibbes Museum of Art, Charleston, South Carolina.
Fraser wrote, “A large part of Harleston (a village) and more especially the lots bordering upon the low ground and marches of Coming’s Creek, was nearly acquired by Mr. Thomas Bennett Sr., who, with Daniel Cannon, utilized the ebb and flow of the tides by establishing on these water large lumber mills. This tidal power was also used largely upon the rice-growing rivers for pounding mills, which separated the husk from the grain;…Nor was it only the waterpower which was utilized, for among the lots conveyed in 1804 by Thomas Bennett Sr. to Thomas Bennett, Jr., later Governor of South Carolina, was the lot of marshland on which the windmill stood near by a branch of Coming’s Creek.”
In the Charleston Courier December 15, 1825, appeared a notice: “At Private Sale…that large Brick Wind Mill, situate on Harleston’s Green, adapted for the sawing of lumber. ” Windmills & watermills with vast undershot wheels, worked by the tides, were common in the neighborhood along the Ashley River.
at 4:00 AM