A French traveler wrote in 1769 that at Middleton Place, “the river which flows in a circuitous course, until it reaches this point, forms a wide, beautiful canal, pointing straight to the house.”

This blog entry is based on the following article with a few boring details I felt compelled to ad.

In 1678 a group of Barbados planters left the island because, as one of them said, it was such a ''brutish'' place. They set sail for Charleston, where they hoped to find or create a more genteel place to live. In a surprisingly short time they had done so. The rice economy was making Charleston one of America's richest cities, with a sophisticated 18th-century urban environment.

Charleston soon became known for its gardens & seeds were being imported from London - sweet alyssum, daisy, foxglove, periwinkle, snapdragon, thrift & violet. It was not long before West Indian flowers were brought to Charleston - the yellow begonia, the four o'clocks & the Parkinsonia. 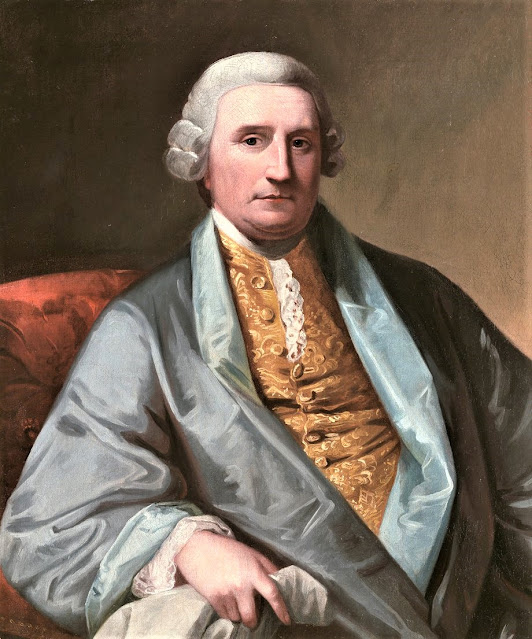 Henry Middleton (1717-1784)
Henry became, in 1741, one of the richest men in the American colonies. That year he decided to build a garden on a piece of property he owned in a curve of the Ashley River 12 miles upstream from Charleston. When Henry Middleton started his garden, he was said to own 800 slaves & 10,000 acres.

The site, the dowry of his wife, Mary Baker Williams (c 1721-1761}, was dominated by a high bluff & fell down to the Ashley in a long slope. This was worthless for rice cultivation, which depended on the ebb & flow of tidal rivers to flush the fields. Middleton created his garden on that long slope.

Middleton molded the slope's wide contours into a series of sweeping terraces that were graduated, steplike, down to the river, where he designed two symmetrical butterfly lakes. He built a house on top of the bluff that gave him a view of his altogether pleasing imposition on the geography of the Low Country.

For all the perfection of its design, the glory of Middleton Gardens is in the profuse blossoms of its thousands of subtropical plants, & most especially of its azaleas & camellias. There are azaleas almost everywhere you turn, with the most dramatic display along the Azalea Hillside, a bank rising at the rice mill pond that was planted in the 1930's with about 35,000 bushes. And today, with later plantings, there are said to be 60,000 azaleas there. When these are in bloom from mid-March through mid-April they make one of the most spectacular sights in American horticulture. The camellias, in bloom from December through mid-March, are in two clusters. Those planted before 1940 form a breathtaking allee along the border with the greensward.

At the site, pains have been taken to make Middleton's long story accessible - & you may as you walk see signs & displays that give you not only Middleton's history as a garden, but also its history as a great colonial rice plantation & the seat of one of America's most distinguished political families. Henry Middleton (1717-1784) was President of the First Continental Congress & both his son & grandson were active in national & local affairs.

Middleton Gardens has been ravaged several times, first by British troops during the Revolutionary War, then by Union troops in 1865 at the end of the Civil War, & again by an earthquake in 1886. There are few written records of the garden & no contemporary references to its designer nor the actual building of the garden. Tradition says that Middleton employed an English landscape gardener; whoever did design it was an artist of the first rank & a competent engineer.

What is known with certainty is that the garden that sits along the Ashley in 1986 is in its architecture the same garden Henry Middleton built, or started building, in 1741. The essential esthetic of the garden is its exactness. A safe inference is that it was drawn from some French gardens. It is often assumed that Henry Middleton got his sense of what a garden should be from a book popular at that time, ''Theory & Practice of Gardening,'' by Dezalier d'Argenville, a student of Andre Le Notre, the designer of the gardens at Versailles. As for the actual construction, the legend is that it took 100 slaves 10 years to build it. 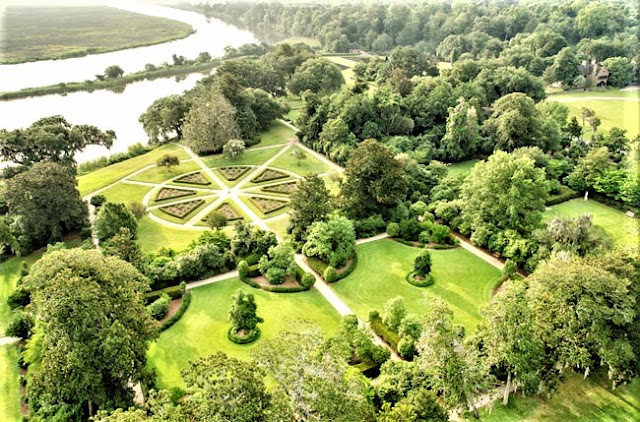 The formal gardens are to the right of the house site & were planted within a large right triangle. Within this triangle smaller gardens were laid out in a variety of geometric shapes. Within the triangle are the azaleas, the Middleton Oak, thought to be one of the oldest live oaks in the United States, & almost every variety of plant found in the southeastern United States. 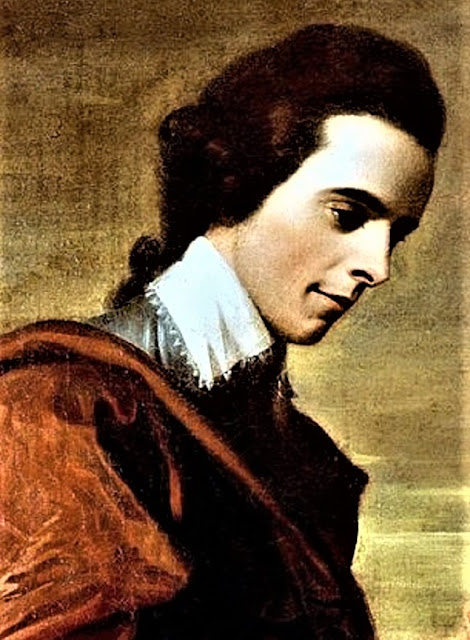 Arthur Middleton (1742-1787) Detail from a painting by Benjamin West
Arthur Middleton, Henry's son (1742-1787) & his wife Mary Izard (1747-1814), reigned over the garden too briefly & were too busy to do anything more than maintain it. Although Arthur only lived to be 44, he signed the Declaration of Independence & was, like his father, a member of the Continental Congress & a prisoner of war during the American Revolution. He is buried in the Middleton garden along with his mother.

In just one plant order to England, he purchased 253 different species, including 52 types of flower seeds, 54 sorts of bulbs, 71 hardy herbaceous plants, 41 varieties of greenhouse plants & 35 kinds of vegetable seeds. The earlier Middletons did not keep records, or the records were lost, but Henry did keep a diary. He notes the blooming of violets, jasmine, arrowhead, andromeda, wild orange, roses & sassafras.

It was Henry's good fortune that the French botanist, Andre Michaux, arrived (1785) while the garden was in his hands. They were close friends for 10 years. It was during his friendship with Michaux that Henry planted the first azaleas at Middleton. Michaux brought to Middleton mimosa, gingko, varnish tree, tea, candleberry tree & four camellia Japonica, three of which survive. They are the oldest camellias in America.

The next Middleton to take over the garden was Henry's son, Williams Middleton (1809-1883), who seems to have considered it a chore from the time he inherited it in 1846. He planted new grass, but he neglected the formal gardens and, under his stewardship, the designs became blurred & indistinct. Williams was a Secessionist, & he abandoned the gardens & fled when the Civil War started. It seemed to rest on his conscience, for he wrote sadly later that ''the camellia flowers in every hue were wasting their beauty on the desert scene.''

What followed after the war was, according to one account, ''50 years of neglect.'' The earthquake of 1886 ripped gaping holes in the terraces & sucked the butterfly lakes dry. It was not until the 1920's that another Middleton descendant, J. J. Pringle Smith, took over the gardens & what had become a mammoth task of restoration.

One of the striking things about Middleton Gardens is that it was set in the middle of a working rice plantation. In fact the gardens & the butterfly ponds once functioned as part of the waterway in which rice was grown. If you stand in the front door of the house looking left toward the river, you see flooded rice fields & to the right a rice mill pond. The original rice mill is at the foot of the gardens.