1794 On the Healthy Aspects of Vegetables & Irrigation 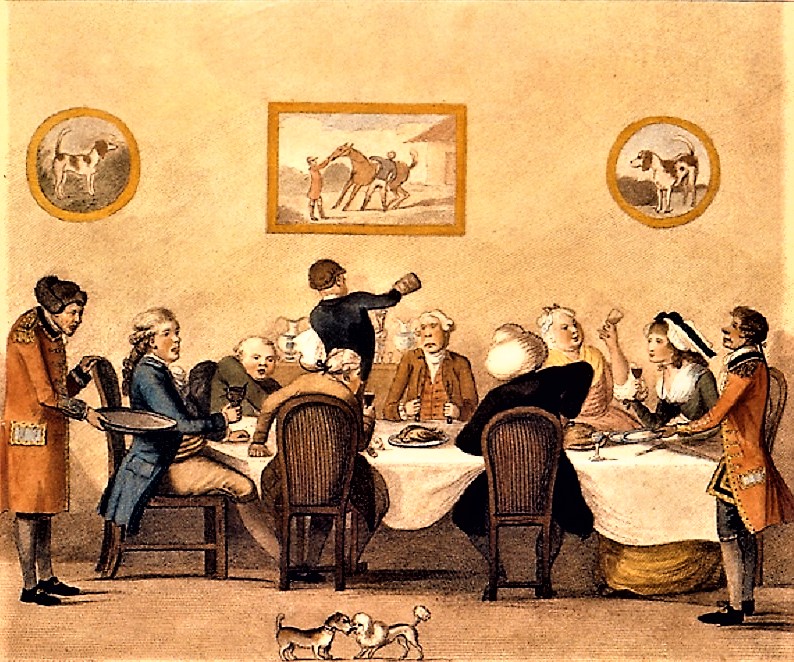 This print is from the 1790s.
Earlier in the 18C "Most New Englanders had a simple diet, their soil and climates allowing limited varieties of fruits and vegetables. In 1728 the Boston News Letter estimates the food needs of a middle-class 'genteel' family. Breakfast was bread an milk. Dinner consisted of pudding, followed by bread, meat, roots, pickles, vinegar, salt and cheese. Supper was the same as breakfast. Each famly also needed raisins, currants, suet, flour, eggs, cranberries, apples, and, where there were children, food for 'intermeal eatings.' Small beer was the beverage, and molasses for brewing and flavoring was needed. Butter, spices, sugar, and sweetmeats were luxuries, as were coffee, tea, chocolate, and alcoholic beverages other than beer."  A History of Food and Drink in America, Richard J. Hooker [Bobbs-Merrill Company:Indianapolis 1981(p. 67)

And from The Pennsylvania Gazette,  July 30, 1794, copied from The FARMER'S and IMPROVER'S FRIEND.
THE PROFIT AND COMFORT OF GARDENS

On eating vegetables...
Gardens do not appear to have sufficiently attracted the attention of either the wealthy or the poor farmer. Plenty and variety of good vegetables have the most favourable effect upon the health of a family, and particularly of the children and women. The doctor's bill is greatly encreased, by inattention to the garden , and often valuable lives are lost by feeding in times of sickness in the hot weather, upon meat, cheese and butter, because there are no early potatoes, carrots, early turnips, cabbages, beans, peas, beets, &c. In every garden raspberries, currants, peaches and pears should be planted. They grow as freely as weeds in this climate, especially the two first, and if used only when ripe, they are preventatives of some disorders, and more certain cures for others, than any medicine.

On irrigation...
The French and Italians place their gardens so as to command a pond of water near them. On the bank of the pond they place an upright post, with a pole across the top, twining on a piece of wood or iron. At one end of the pole is fixed a little pail or bucket, so as to be easily dipped into the pond filled often; the other end of the pole serves as a long handle, by means of which the bucket or pail is dipped into the pond and filled, then raised (by pressing down the handle end of the pole) till the bucket is brought over a cask, into which it is emptied. Water is sometimes raised in like manner by a wheel turned by hand. It is then carried, by little rough troughs, all over the garden , so as to produce a great abundance of vegetables, and especially of those kinds, which usually fail, for want of rain, in dry season.

This is another pleasing instance of the good effects of the Irrigation or watering, so earnestly recommended in the first number of these papers. It is proper to recommend attention to the position of such ponds in relation to dwelling-houses. They should, if near or large, be on one of those sides from which the summer winds do not blow, and they should be kept running, and indeed should be occasionally emptied in the summer months. Here to, it may well to recommend to the farmer and miller, of every denomination, not to place his buildings nearer than is necessary to any mill-pond, common pond, wet ditch or drain, creek, or other stream; and so to place his dwelling, that any such water may lie on the northerly and easterly side of his house, and by no means to have even a running stream, much less a standing water or pond, or a marsh, on the side from which the summer winds can bring the dampness and pernicious vapours, which the sun always raises from such places. Farmers, whose houses, unfortunately are already built on the northerly or easterly side of bogs or marshes, would do well to drain such places, and if they are covered with wood, it will be proper to make the principal ditches or drains one reason before the wood shall be cut off, that, when the sun is let in upon the ground, it may be found, as far as possible, in a dry condition, incapable of producing vapour.
at 4:00 AM