President Thomas Jefferson took his favorite garden tools with him to the White House!

Margaret Bayard Smith (1778-1844) was a friend of Thomas Jefferson & chronicler of early life in Washington, D.C. She met Jefferson through her husband, Samuel Harrison Smith, a Republican newspaperman & founder of the National Intelligencer.  She kept a diary of her experiences, which was published in 1906.

"When he took up his residence in the President's House, he found it scantily furnished with articles brought from Philadelphia and which had been used by General Washington. These, though worn and faded, he retained from respect to their former possessor. His drawing room was fitted up with the same crimson damask furniture that had been used for the same purpose in Philadelphia. The additional furniture necessary for the more spacious mansion provided by the government, was plain and simple to excess.

"The large East Room was unfinished and therefore unused. The apartment in which he took most interest was his cabinet; this he had arranged according to his own taste and convenience. It was a spacious room. In the centre was a long table, with drawers on each side, in which were deposited not only articles appropriate to the place, but a set of carpenter's tools in one and small garden implements in another from the use of which he derived much amusement. Around the walls were maps, globes, charts, books, etc." 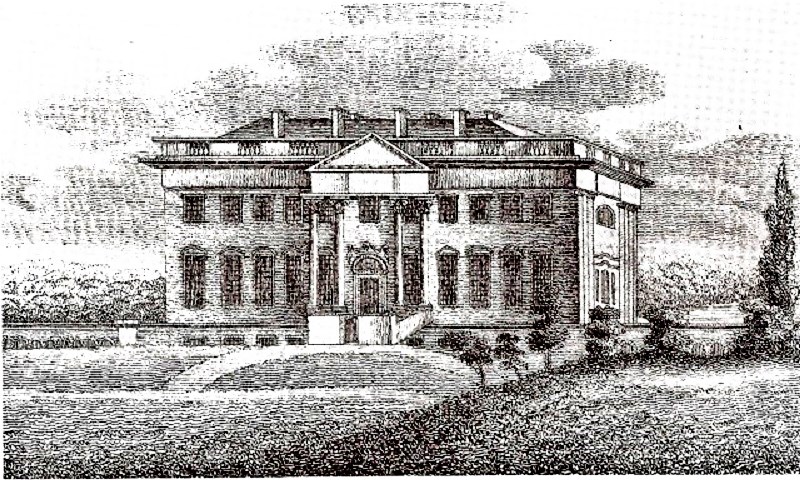 Thomas Jefferson regarded the White House mansion as overly-grand & "Hamiltonian" & considered not moving in at all. Despite his complaints that the house was too big, "big enough for two emperors, one pope, and the grand lama in the bargain," his love of architecture got the better of him, & he began to consider the house a challenge.

The house that President Thomas Jefferson entered in March of 1801 was still unfinished. The great Public Reception Chamber (East Room) that Abigail Adams had used for laundry still had no plaster walls & ceiling.  A drawing of the White House's 1803 first floor marks the State Dining Room as the "Library or Cabinet" & shows that the Family Dining Room & the Butler's Pantry were a single public dining room space. 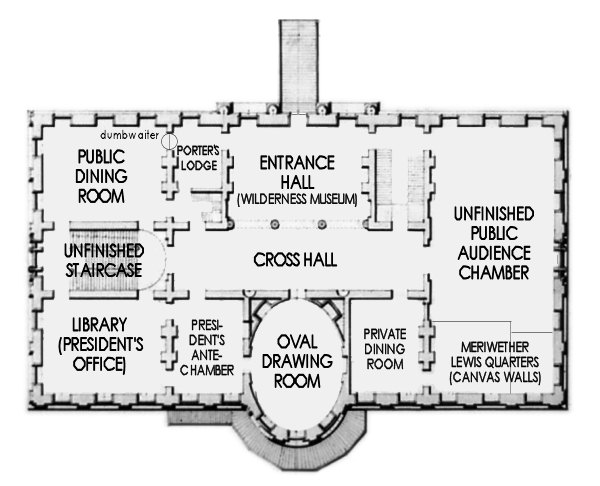 Jefferson created a wilderness museum first in the East Room & then in the Entrance Hall, with mounted animals & Indian artifacts. Jefferson bought various habits & inventions with him to Washington. He had many hobbies & filled his presidential library/office with them.

Back at Monticello, Jefferson used his Southeast Piazza as his greenhouse for growing plants. This greenhouse was part of Jefferson's suite of private rooms that included his book room, writing office (Cabinet), & bedroom. Flanked by two "venetian porches"  His workbench was also located in the greenhouse area, where he is known to have made locks & chains.  The room probably also served as home to the pet mockingbird he took with him to Washington DC.  The room contained his work table & tools, as well as flowers, seeds, & flats for sprouting.

It is not surprising that Jefferson brought carpenter and garden tools with him to the White House. One of his slaves, Isaac Jefferson, wrote of Jefferson in the 1780s. "My Old Master was neat a hand as ever you see to make keys and locks and small chains, iron and brass. He kept all kind of blacksmith and carpenter tools in a great case with shelves to it in his library...been up thar a thousand times; used to car coal up thar. Old Master had a couple of small bellowses up thar."

In 1786 on March 3, Thomas Jefferson wrote to Joseph Mathias Gerard de Rayneval, first secretary of the French foreign office, "...Vergennes having been pleased to say he would give orders at Calais for the admission of certain articles which I wish to bring with me from England...as follows...A box containing small tools for wooden and iron work, for my own amusement..."

Margaret Bayard Smith commented in March of 1809, "In one of the rooms [in the Library], we remarked a carpenters workbench, with a vast assortment of tools of every kind and description. This, as being characteristic, is worthy of notice; the fabrication with his own hands of curious implements and models, being a favourite amusement."

Thomas Jefferson wrote to his friend & Revolutionary War hero, Tadeusz Kosciuszko, on 26 February 1810, "I am retired to Monticello, where, in the bosom of my family, & surrounded by my books...from breakfast to dinner I am in my shops, my garden, or on horseback among my farms...I talk of ploughs & harrows, seeding & harvesting, with my neighbors, & of politics too, if they chuse...& feel at length the blessing of being free to say & do what I please, without being responsible for it to any mortal."

After his death in 1826, visitor to Monticello Anne Royall wrote in February of 1830, "There were besides these [Entrance Hall, Parlor, Dining/Tea Room], four rooms on the lower floor, two on the right and two on the left, those on the right were quite small to those on the left: one was the room in which Mr. Jefferson worked, which it appeared he did, from the appearance of the room, the impliments for working in wood, squares, &c. lying about the room, --the one next to it, wsa Mr. Jefferson's chamber in which he died."
Posted by Barbara Wells Sarudy at 4:00 AM