Who Planted the 1st Orchard in Colonial America? 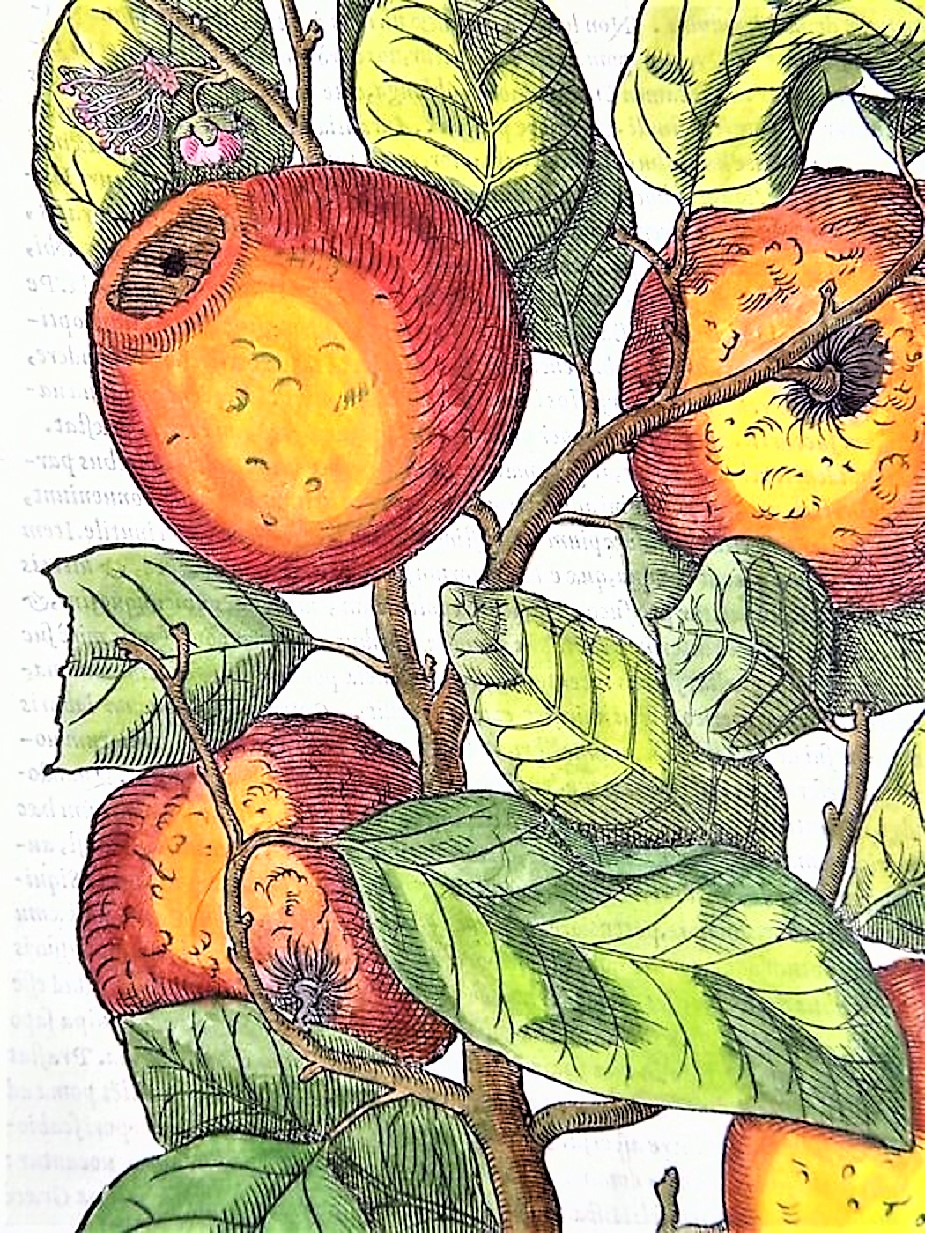 Rev. William Blackstone (1595-1675) (also spelled Blaxton) was the 1st European to settle in what is now Boston, & probably the 2nd European to settle in what is now Rhode Island. Blackstone was one of the earliest Anglican episcopal clergymen resident in New England as distinguished from the Puritan founders of New England. He is also is said to have planted the 1st orchard recorded in colonial British America at present-day Boston, MA. It is written that he also had planted an apple orchard, the 1st that ever bore fruit in Rhode Island.

In 1623, Captain Robert Gorges was in charge of a government-funded expedition to propagate the Gospel in the New World & the plan was distinctly to be a church settlement, specifically in the Massachusetts Bay area, as contrasted with the Separatists settlement already established at Plymouth. The Pilgrims had recently established a colony on Cape Cod, and KING JAMES wanted to establish his own colony to counter the threat they represented to his religious authority. Captain Gorges, accordingly, took with him at least two ordained clergyman. Rev. William Blackstone had been designated to take the Plymouth pulpit. (Proceedings of Massachusetts Historical Society 1878, p. 197.) Unhappy with the inflexible Anglican Church in England of the time, he had joined the Gorges' expedition.  This attempt at settlement was unsuccessful, and most of the expedition returned to England, but Blackstone did not want to return to England & remained to settle in solitude in what is now Boston’s Beacon Hill.

Rev. William Blackstone was 28 years old, when he arrived in the new world; & now at 30, when his shipmates were returning to England, he moved across to the North Shore & established his home on the western slope of the peninsular of Shawmut (Boston), opposite the mouth of the Charles River. Blackstone had land to tend & books to read. Rev. William Blackstone brought with him to the New World a large collection of books, approximately 186 in various languages.  Blackstone settled at Shawmut “like a sensible man, Blackstone chose the sunny southwest slope of Beacon Hill for his residence”  Two landmarks existed to fix the site of Blackstone’s house, namely the orchard planted by him, the 1st in New England, & his spring. The orchard is represented on the early maps; in mentioned in 1765, as still bearing fruit; & is named in the deeds of subsequent landowners. 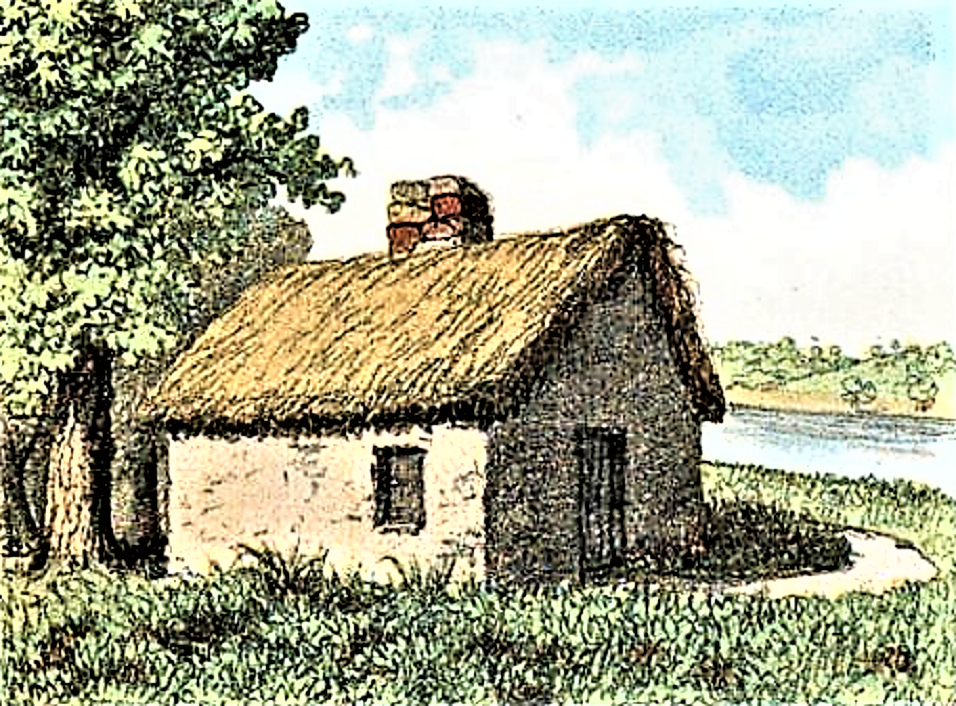 Conjectural drawing of Blackstone's house in Boston, 1630-1635 by Edwin Whitefield 1889

He needed apple seeds to plant that 1st orchard. Some speculate that that he was foresighted enough to retrieve & save every apple core (which naturally contains seeds) he could find. Most ships crossing the Atlantic were stocked with apples along with other foodstuffs. Others believe that Blackstone brought a bag of apple seeds with him when he sailed to the new world.

Backstone’s isolation came to an end in 1630 when the ship Arbella appeared in the harbor, carrying Puritans who were fleeing Charles I, England’s new king. GOVERNOR WINTHROP sailed into Boston Harbor in July 1630 in his flagship, Arabella, of 350 tons & 28 guns, along with the Talbot & the Jewel. They landed at Charlestown where sickness soon befell them due to the lack of good drinking water, which took a heavy toll in lives. Rev. William Blackstone on the other side of the Charles River, witnessing this terrible scene offered to share. GOVERNOR WINTHROP & many of his followers came to Shawmut, taking advantage of Rev. William Blackstone's offer of water & assistance.

When GOVERNOR JOHN WINTHROP found Rev. William Blackstone in 1630, he had built his home & planted his orchard. On June 9, 1628, Rev. William Blackstone, at 33 years of age, was assessed 12 shillings toward the expense of Thomas Morton of Merry Mount's arrest. On March 12, 1629, at the age of 34, Rev. William Blackstone of New England, was nominated, & appointed by the Council for the Affairs of England in America to represent them in their place & stead in the Hilton Patent of Dover, New Hampshire.

On April 1, 1633, GOVERNOR WINTHROP granted Rev. William Blackstone 50 acres of the 800 he had already had claim to for more than 8 years. Rev. William Blackstone offered to sell 44 acres of the 50 he had been allowed by WINTHROP. On November 10, 1634, at a general meeting upon public notice, it was agreed that "...the constable, shall make & assess all these rates, viz. a rate of 30 Pounds to Mr. Blackstone, for 44 of the 50 acres, but reserving 6 acres for himself, in the event his future plans failed to materialize."

GOVERNOR STEPHEN HOPKINS wrote in his "History of Providence" published in the 1765 Providence Gazette, only 90 years after Blackstone's death, that "Blackstone had been at Boston 'so long' (when the Massachusetts colony came) as to have raised apple trees & planted an orchard." The "History of Rehoboth" notes, "This is corroborated, too, by the circumstance of the right of original proprietor having been allowed, to some extent, at least, to Blackstone by the Massachusetts colony, by virtue of pre-occupancy."  Congregational clergyman Cotton Mather (1663-1728) grumblingly alludes to  in his Magnalia Chrisi Americana: “There were also some godly Episcopalians; among whom has been reckoned Mr. Blackstone; who by happening to sleep first in an old hovel upon a point of land there, laid claim to all the ground whereupon there now stands the Metropolis of the whole English America, until the inhabitants gave him satisfaction.” This concedes only a squatter’s title to Blackstone.

Colonists did purchase Rev. William Blackstone's 44 acres: "The desposition of... These deponents being ancient dwellers & inhabitants of the town of Boston in New England...agree with Rev. William Blackstone  for the purchase of his estate & right in any lands lying within the said neck of land called Boston...reserving only unto himselfe about six acres of land on the point commonly called Blackstone's Point, on part whereof his then dwelling house stood; after which purchase the town laid out a trayning field; which ever since & now is used for that purpose, & for the feeding of cattell... Mr. Blackstone bought a stock of cows with the money he received as above, & removed & dwelt near Providence, where hee lived till the day of his death.  "Deposed this 10th day of June, 1684, by... "Before us "S. Bradstreet, Governor, "Sam. Sewdll, Assist."
(Snow's History of Boston, Page 50-1) The Puritans decreed that the 50 acres they bought from Blackstone were to be used as a training field and cattle grazing ground. The land has been known as the Boston Common ever since.

In the Spring of 1635, Rev. William Blackstone left Boston with all of his worldly possessions, 186 books & all, across the Neck, through Roxbury, turning his back on the "very good house with an enclosure to it, for the planting of corn;" & also a stipend of 20 Pounds per year, which awaited his acceptance as clergy at Agamenticus, Maine, & directed his steps southward. He passed through the area of the Plymouth Colony & eventually brought him to a spot that pleased him on the banks of a river which emptied at no great distance further on into the Narragansett Bay. He decided to stay in this spot about 35 miles south of Boston on what the Indians called the Pawtucket River, today known as the Blackstone River in Cumberland, Rhode Island, he was the first settler in Rhode Island in 1635, one year before Roger Williams established Providence Plantations. Here he built another house, planted another orchard & passed the remander of his life, nearly 40 years of it.

The first European settler within the original limits of Rehoboth was Rev. William Blackstone, who lived about 3 miles above the village of Pawtucket. Here he tended cattle, planted gardens, & cultivated a 2nd apple orchard, where he cultivated the 1st variety of American apples, the Yellow Sweeting. He called his home "Study Hill" and was said to have the largest library in the colonies at the time.  ROGER WILLIAMS was banished from Salem, Massachusetts in in September 1635, but was allowed to await until Spring. However, he feared deportation & left in January, 1636. He founded the city of Providence, Rhode Island, only 6 miles from Rev. William Blackstone, who, by this time, had built his house which he called "Study Hall" & the elevation upon which he built it  named "Study Hill." 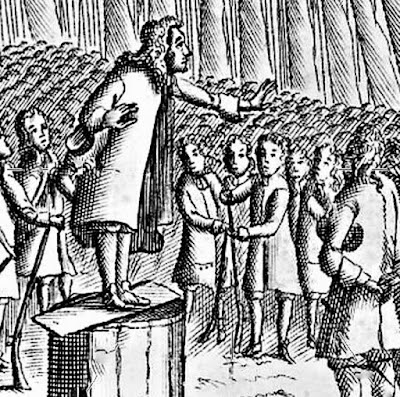 In 1641, a visitor of Blackstone in his new habitation above Pawtucket, & made the following statement: "One Master William Blackstone, a minister, went from Boston, having lived there 9 or 10 years, because he would not joyne with the church; he lives neere MASTER ROGER WILLIAMS, but is far from his opinions."(Winthrop. Vol. 1 45)   In Providence, Rhode Island, the first General Court composed of all the Freemen of the colony, was held in the Autumn of 1640. Rev. William Blackstone  was 45 years old then.  Over 100 persons were admitted Freemen of the colony.  Among the applicants for freedom was Rev. William Blackstone.  Blackstone became a good friend of Roger Williams. While they disagreed on many theological matters, both agreed on tolerance and the value of expression of various religious opinions. Baptist Williams invited Anglican Blackstone to regularly preach to William’s followers in Providence.

Rev. William Blackstone once again planted an apple orchard, the first that ever bore fruit in Rhode Island. "He had the first of that sort called yellow sweetings that were ever in the world perhaps, the richest & most delicious apple of the whole kind." He frequently went to Providence to preach the Gospel, "and to encourage his younger hearers, gave them the first apples they ever saw." 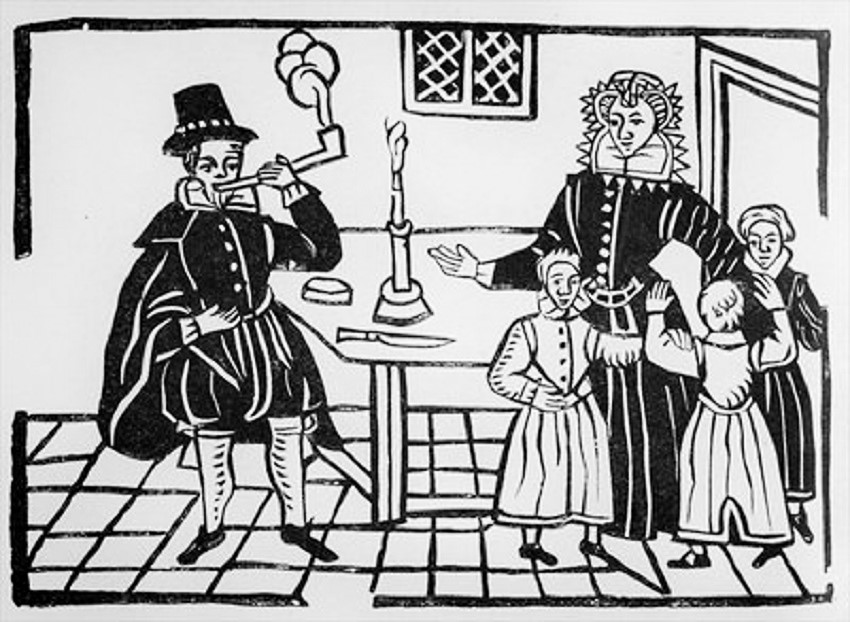 June 15, 1673, Sarah, Blackstone 's wife for 14 years died at the age of 48 years. Rev. William Blackstone was then 78.  Their son John Blackstone was 13. Rev. William Blackstone died May 26, 1675, at the age of 80 years. He was buried May 28, 1675 at Lonsdale, Rhode Island next to his wife, Sarah.  ROGER WILLIAMS, writing a few days later to GOVERNOR JOHN WINTHROP, JR., of Connecticut, gives these details of his end: "About a fortnight since your old acquaintance, Mr .Blackstone, departed this life in the fourscore year of his age; four days before his death he had a great pain in his brest, & back, & bowells: afterward he said, he was well, had no pains, & should live, but he grew fainter, & yeilded up his breath without a groane."

Blackstone believed in purchasing his land from the Indians as the true owners of the land.  On June 2, 1675, KING PHILIP, second son of MASSASOIT, attacked Swansea (Providence area). Rev. William Blackstone had recently died, when PHlLIP's warriors destroyed his 40-year old homestead, library, livestock, & all. His buildings at Study Hill, burned in King Philip’s War were not rebuilt or resettled.

John Blackstone, son of Rev. William Blackstone. his only child, born at Rebohoth. When his father died,  John was a minor. The Plymouth colony records show this entry —— "June 1, 1675, ...are appointed & authorized by the Court to take some present care of ...this son now left by him"  Court Order dated July 10, 1675: "...John Stevenson, step-son to Rev. William Blackstone , late deceased, was very helpful to his step-father & mother, in their lifetime without whom they could not have subsisted, as to a good help & instrument thereof, & he is now left in a low & mean condition, & never was in any manner recompensed for his good service aforesaid; & if (as it is said at least) his step-father engaged to his mother, at his marriage with her, that he should be considered with a competency of land out of the said Blackstone's land... do order & dispose fifty acres of land unto the said  John Stevenson out of the lands of the said Rev. William Blackstone  & five acres of meadow, to be laid out unto him...according as they shall think meet so as it may be most commodious to him...By order of the Court...of Plymouth."

For Research on the life of William Blackstone see  Nathaniel Brewster Blackstone
at 4:30 AM