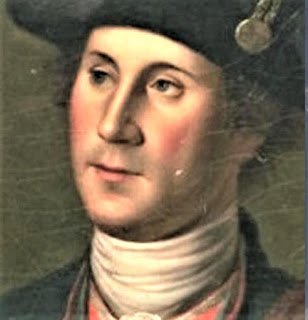 George Washington (1732-1799) by Charles Willson Peale 1772 Detail
One of the earliest horticultural entries in George Washington's diary is dated March 24, 1762, when he recorded the receipt of cherry trees from his neighbor Colonel George Mason of Gunston Hall. Fruit trees were frequently mentioned in his diaries as a large quantity of fruit was desired for meals, preserves, and for making cider. In 1785,Washington had fruit trees removed from the upper garden to make room for vegetables, flowers, and 215 apple trees were received from a Major Jenifer. Washington had trees planted within the garden enclosures and a fruit garden just below the Mount Vernon kitchen garden. He also added orchards to the outlying farms. Apples, pears, cherries, peaches, and apricots were the standard fruit trees grown at Mount Vernon. 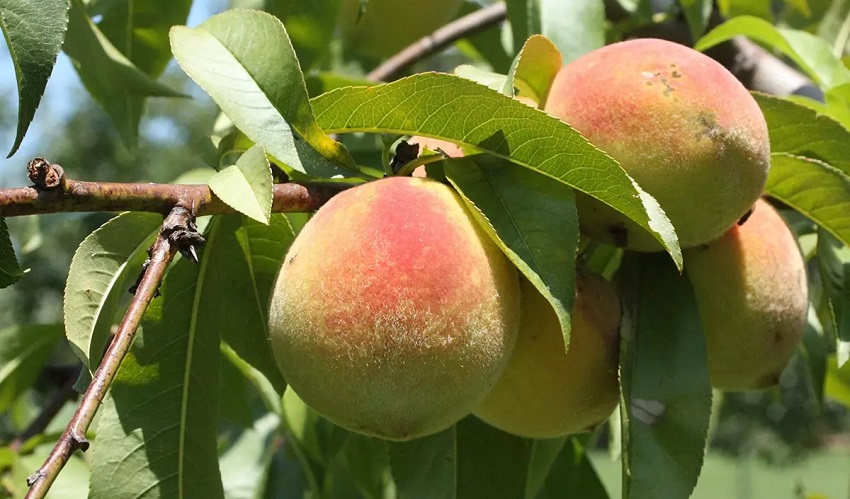 One of the earliest horticultural entries in Washington's diary is dated March 24, 1762, when he recorded the receipt of cherry trees from his neighbor Colonel George Mason of Gunston Hall. Fruit trees were frequently mentioned in his diaries as a large quantity of fruit was desired for meals, preserves, and for making cider.

In 1785, George Washington removed fruit trees from the upper garden to make room for vegetables, flowers, and 215 apple trees were received from a Major Jenifer. Washington planted trees within the garden enclosures and a fruit garden just below the Mount Vernon kitchen garden. He also added orchards to the outlying farms. Apples, pears, cherries, peaches, and apricots were the standard fruit trees grown at Mount Vernon. Washington's gardeners also grafted and trained these trees as espaliers, a method of training trees to grow on trellises or on brick walls. Apple and pear espaliers were planted on the interior of the garden around garden beds and the stone fruits such as peaches, cherries, and apricots were "nailed to the wall" by his gardeners.

A visitor in 1782 observed, "There is an immense, extremely well-cultivated garden behind the right wing. The choicest fruits in the country are to be found there."

To accomplish this, Mrs. Washington instructed Mount Vernon’s hired and enslaved gardener of the types and quantities of fruits and vegetables she would need for her enslaved cooks to transform into meals.

At the time,  farmers markets, kitchen gardens were “a necessary support of life,” as one gardening manual observed. In the 18th century, every home outside the city had a vegetable or kitchen garden providing nutritious supplements to rural diets. Since the 1760s, Mount Vernon’s kitchen garden has been continuously cultivated for the production of vegetables.

While George Washington's grape-growing efforts in the early 1770s gave the locality its name, that endeavor quickly proved to be unsuccessful. The area continued, however, to function as host to a great variety of plant material, and by 1785 it served as a repository for live oaks, horse chestnut trees and tree-box, as well as for grasses and grains.

In 1786, four squares were developed within the Vineyard Inclosure and designated a "fruit garden". With its development came a great influx of fruit trees of all varieties including the Newtown Pippin, Maryland Red Streak and Gloucester White Apples; Amber and Green Gage plums; Chantilly and Two Pound Pears; Heath Peaches; and Mayduke and Carnation Cherries.

The Vineyard Inclosure served a variety of functions in addition to the growing of fruit. In 1793, Washington explained to his estate manager, Anthony Whiting, that the botanical garden near the greenhouse was to receive plants that "required, but a small space for their cultivation. And what is called the Vineyard Inclosure, was designed for other articles of experiment, or for seed which required still greater space before they were adopted on a large scale ..."

The Vineyard Inclosure served as an area for the collection of seed, an important practice in America because of the difficulty and expense of obtaining seed. Several types of vegetables, including pumpkins and lemon carrots, along with various grass crops were grown in the Vineyard Inclosure for their seed production.

During the 1790s, Washington directed that part of the Vineyard Inclosure be appropriated to raising any and all kinds of plants fit for hedging or to repair hedges. Hedges, also known as live fences, were trees planted closely in a line along the perimeters of the fields to act as a barrier to animals which might ravage the crops. They often were planted in conjunction with a ditch to make a more effective boundary. Within the Vineyard Inclosure various types of trees were started from seed or cuttings and were later transplanted out to surround his fields as live fences.

Washington's writings reveal that the development and use of the Vineyard Inclosure paralleled what was described by horticultural experts of the day as the appropriate principles and procedures for the establishment of a nursery. The following is an excerpt taken from Abercrombie and Mawe's, The Universal Gardener and Botanist (1778), a book owned by Washington and which may have assisted him in designing the Vineyard Inclosure:

The Nursery, a most useful district of gardening, appropriated for the raising and nursing all sorts of trees, shrubs, and herbaceous plants to a proper growth, for supplying and recruiting the different gardens, orchards, plantations, & c...

A fence around the whole ground is necessary: this may either be a hedge and ditch, or a paling;... The ground must then be all regularly trenched one or two spades deep ... Then, having trenched the ground, proceed to divide it by walks into quarters, and other compartments; a principal walk should lead directly through the middle of the ground, which may be from five to eight or ten feed wide according as it shall seem proper for use or ornament, having a broad border on each side: another walk should be carded all round next the outward boundary ... next the fence all the way, then may divide the internal part by cross walks, so as to form the whole into four, six or eight principal divisions, which are commonly called quarters.

One or more of the divisions must be allotted for a seminary, i.e. for the reception of all sorts of seeds, for raising seedling plants to furnish the other parts; ...

Another part of the Nursery-ground should be allotted for stools of various trees and shrubs, for the propagation by layers... The other principal division, therefore, of Nursery-ground, is for the reception of the various sorts of seedling-plants from the above seminary-quarters; also for all others that are raised from suckers, layerers, cuttings, & c... 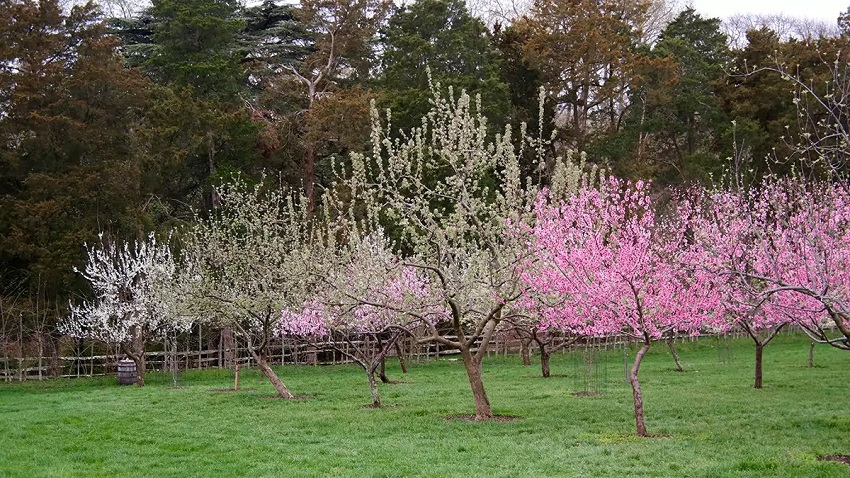 In distribution of all the various sorts of plants in the Nursery, let each sort be separate: the fruit-trees should generally occupy spaces by themselves; the forest-trees, & c. should also be stationed together; all the shrub-kind should also be ranged in separate compartments;...

he planted vegetables to raise seed for later sowing in large quantity;

he planted the seeds, cuttings, and seedlings of a variety of trees for the development of hedging materials;

he cultivated various legumes and grass crops for the collection of seed;

and he experimented with many seeds and plants given to him as gifts.

Washington laid out and planted the area, so visible in its location, in an organized and methodical fashion, relying on his horticultural reference material as a guide.

The Vineyard Inclosure was an area of evolving purpose with extensive plantings which played a key role in the horticultural history of Mount Vernon.

Note: Daniel of St. Thomas Jenifer's surname is Jenifer. According to Bro. C. Edward Quinn in Roots of the Republic: The Signers of the Constitution of the United States (Danbury, CT. 1996), the origin of Jenifer's unusual given name is unknown but it appears frequently in his family. He represented Maryland in the Continental Congress (1778–82), while serving as president of the state's senate (1777–80).  Along with James Madison, John Dickinson, George Mason & his good friend George Washington, Jenifer began to explore ways to solve the economic & political problems that had arisen under the weak Articles of Confederation. Consequently, he attended the Mount Vernon Conference, a meeting that would lead eventually to the Constitutional Convention.

Research plus images & much more are from the Mount Vernon website - to begin exploring, just click the highlighted title above.