Garden to Table - What Did the Patriots Eat & Drink as They Planned a Revolution? 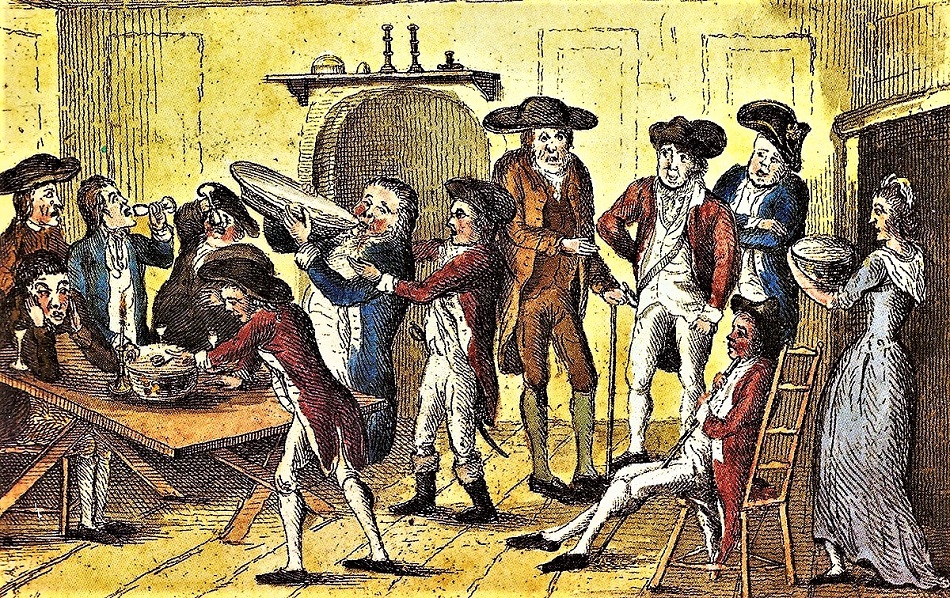 What Did the Founding Fathers Eat & Drink as They Started a Revolution?
By Amanda Cargill Smithsonianmag.com, July 3, 2018

...Walter Staib, executive chef at Philadelphia's City Tavern & host of PBS' “A Taste of History,” contends that among those who signed the Declaration in 1776 were America's earliest foodies. “While [farm-to-table & foodie movements] are trendy today,” he says, “the founders were doing it out of necessity.”

He points out that colonial America lacked the transportation infrastructure to deliver foods from faraway lands: “If it was around, you ate it.” What was around were legumes, produce & anything that could be foraged or hunted. In the mid-Atlantic, seafood was especially popular, reflecting the abundance of the Delaware River, which was then, says Staib, “pristine & teeming with fish.” Today, following two centuries of pollution that decreased water quality & diminished fish populations, it is in the early stages of a rebound.

George Washington was exceedingly fond of dining on seafood. For nearly 40 years, the three fisheries he operated along the ten-mile Potomac shoreline that bordered Mount Vernon processed more than a million fish annually. Among the items on the plantation’s menu were crabmeat casseroles, oyster gumbos & salmon mousse.

Thomas Jefferson admired French fare above all, & he is credited, according to Staib, with popularizing frites, ice cream & champagne. He is also often credited—although incorrectly—with the introduction of macaroni & cheese to the American palate. It was, in fact, his enslaved chef James Hemings who, via Jefferson’s kitchen, brought the creamy southern staple to Monticello. Trained at the elite Château de Chantilly while accompanying Jefferson on a trip to France, Hemings would later become one of only two laborers enslaved by Jefferson to negotiate his freedom.

As for dessert, none of the Founding Fathers was without a sweet tooth. John Adams' wife, Abigail, regularly baked Apple Pan Dowdy, a pie-meets-cobbler hybrid that was popular in New England in the early 1800s; James Madison loved ice cream & was spoiled by his wife Dolley's creative cakes, for which she gained such renown that, to this day, supermarkets across America carry a brand of prepared pastries bearing her—albeit incorrectly spelled—name; & John Jay, in a letter sent to his father in 1790, reported that he carried chocolate with him on long journeys, likely “shaving or grating it into pots of milk,” says Kevin Paschall, chocolate maker at Philadelphia's historic Shane Confectionery, & consuming it as a drink.

The Founders, like most colonists, were fans of adult beverages. Colonial Americans drank roughly three times as much as modern Americans, primarily in the form of beer, cider, & whiskey. In Colonial Spirits: A Toast to Our Drunken History, author Steven Grasse connects this seemingly outsized consumption to the Revolutionary spirit of the time when he writes, “In the drink, a dream; & in the dream, a spark.” Reverend Michael Alan, who illustrated & helped research the book says simply: “From morning until night, people in the 18th century drank.”

Benjamin Franklin was especially unabashed about his love of “the cups.” Though Grasse writes that he was careful to advise temperance, he regularly enjoyed wine & what some might argue were early iterations of craft cocktails. His favorite, according to Alan, was milk punch, a three-ingredient brandy-based sip whose two non-alcoholic components–milk & lemon juice–washed & refined its third. Another Franklin foodie badge is his “Drinkers' Dictionary,” a compendium of Colonial slang describing the state of drunkenness. Initially printed in 1737 in the Pennsylvania Gazette, its publication made Franklin one of America's first food & drink writers.

Washington was known for racking up sizable tabs after buying drinks for friends. Recounting one particularly generous–and raucous–night wherein Washington ordered 54 bottles of Madeira, 60 bottles of Claret, & 7 full bowls of punch, Alan says “He knew how to throw down.”

Despite this, it was Jefferson, notes Grasse, who was the true oenophile of the bunch. As a young man, he drank Portuguese Madeira by the truckload, & in his post-Presidential years, he repeatedly tried & failed to cultivate grapes for winemaking at his vineyard in Monticello.

While tales of alcoholic escapades could understandably lead one to believe that the Founders were a group of party animals–save the relatively sober Alexander Hamilton, referred to by John Adams as an “insolent coxcomb” who, on the rare occasion that he drank something other than coffee, became “silly & vaporing”–it's important to note the reasons why alcohol consumption was so high.

First & foremost, drinking alcohol was a means of survival. Potable water was scarce in colonial times, writes Grasse, so almost all of what was available carried harmful diseases. Among these were smallpox, lockjaw, & the delightfully named black vomit. For colonists, drinking water meant risking one's life, & no one who could afford otherwise dared do it. Alan confirms that even children drank beer–a hard cider & molasses combination aptly named “ciderkin.” Put simply, consuming alcohol was, in the absence of clean drinking water, a means of staying hydrated.

The taverns where alcohol was consumed also played a vital role in colonial life. “Systems like the post office, libraries, even courthouses, were just being put into place,” explains Alan. “Taverns offered all of these services plus a good beer buzz.”

For political figures like the Founding Fathers, taverns were also where one went to get the inside scoop on political adversaries & posit agendas for which one hoped to gain favor. “Ben Franklin,” reports Staib, “used taverns as a tool of diplomacy.” For him, “eating, drinking, & gossiping” were negotiation tactics. It was in taverns that the Founding Fathers, “emboldened by liquid courage,” to quote Staib, & likely, after tying a few on, unfettered by the rarefied rules of governance to which all of history had subscribed, honed the concepts contained in the Declaration of Independence & the Constitution.

Of the link between food, drinks, & Revolutionary history, Alan offers this pun-intended nod: “A lot of crazy ideas can come out of a “spirited” evening of conversation.”