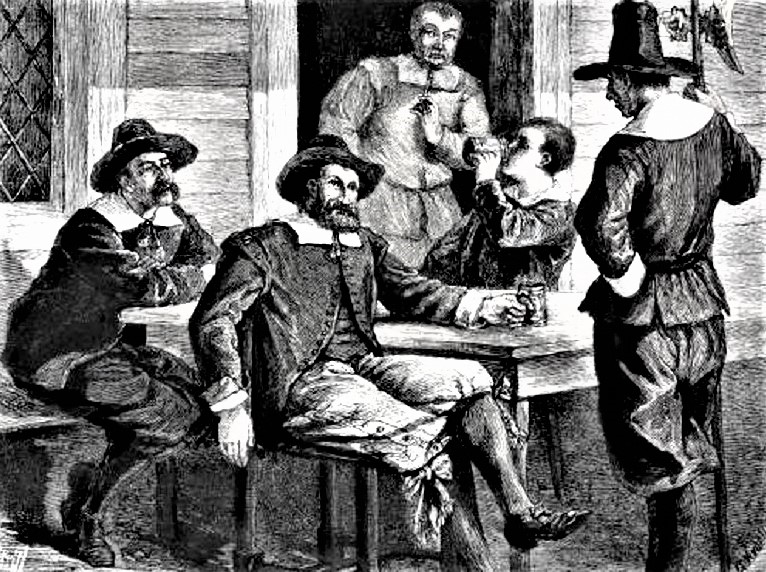 Alcohol in Colonial America began with the arrival of Europeans.  Except for several nations in the Southwest, Native Americans did not have alcohol beverages. The Apache & Zuni drank alcoholic beverages which they produced for secular consumption. The Pima & Papago produced alcohol for religious ceremonial consumption. Papago consumption was heavy. However, they limited it to a single peaceable annual ceremony. And the other tribes’ drinking was also infrequent & didn’t cause problems.

The Puritans loaded more beer than water onboard the Mayflower before casting off for the New World.   This reflected their traditional drinking beliefs, attitudes, & behaviors. They considered alcohol to be a natural & normal part of life. They believed that God created alcohol & that it was inherently good. Indeed, Jesus both made & drank wine & approved drinking in moderate.

Their experience was that it was safer to drink alcohol than the typically polluted water. Alcohol was also an effective analgesic. It provided the energy necessary for hard work. Alcohol served as  a social lubricant, provided entertainment, facilitated relaxation & contributed to the enjoyment of food. It also provided pharmacological pleasure. In sum, alcohol in colonial America generally enhanced the quality of life.

For hundreds of years their English ancestors had enjoyed beer & ale. People of both sexes & all ages typically drank beer with their meals.

Importing a continuing supply of beer was expensive. So the early settlers brewed their own. However, it was difficult to make the beer to which they were accustomed. That was because wild yeasts caused problems in fermentation. For this reason it resulted in a bitter, unappetizing brew.

But these early adventurers did not give up. Wild hops grew in New England. They ordered hop seeds from England in order to cultivate an adequate supply for traditional beer. In the meantime, the colonists improvised a beer made from red & black spruce twigs boiled in water. They also made a beer from ginger. A ditty from the 1630s reflects their determination & ingenuity.

If barley be wanting to make into malt,

For we can make liquor to sweeten our lips,

Slowly, the colonists mastered the intricacies of brewing in the New World. Then beer became widely available. And many farmers made their own with the help of a malster. The malster malted their barley, or more often, corn.

The colonists considered beer to be very important. For example, a brewery was one of Harvard College’s first construction projects. It was to provide a steady supply of beer for the students.  And Connecticut required each town to ensure that a place was available for the purchase of beer.

Home brewers made the weakest & most commonly available beer by soaking grain in water. But this “small beer” spoiled quickly because of its low alcohol content. Therefore, people consumed it quickly. The homemaker brewed beer once or twice a week. “Ships beers” were stronger & also readily available. But the strongest beer, brewed with malt & extra sugar, was expensive & uncommon.

The colonists also learned to make a wide variety of wine from fruits. These included strawberries, cranberries, blackberries, elderberries, gooseberries, & currants. They also made wines from numerous vegetables. These included carrots, tomatoes, onions, beets, celery, squash, corn silk, dandelions, & goldenrod. They also made wine from such products as flowers, herbs, & even oak leaves.  Early on, French vine-growers came to the New World to teach settlers how to cultivate grapes.

Cider had been popular in England but apples were not native to New England. Farmers promptly planted the first orchard using English seeds. Over time apples became abundant in the colonies.

People typically fermented apple juice in barrels over the winter.  Colonists sometimes added honey or cane sugar. This  increased the alcohol content & also creating natural carbonation. “Apple champagne” was a special treat. “Cider was served to every member of the family at breakfast, dinner, & supper. Cider was consumed in the fields between meals, & was a regular staple at all the communal social functions.”

...Rum was not commonly available until after 1650. Then, it increasingly came from the Caribbean. However, the cost of rum dropped after the colonists began importing molasses & cane sugar directly & distilled their own. By 1657, a rum distillery was operating in Boston. It was highly successful. Within a generation the production of rum became colonial New England’s largest & most prosperous industry.  Clearly, distilled spirits were a very important part of alcohol in Colonial America.

In the profitable Triangle Trade, traders took rum to England for manufactured products.  Then in West Africa they traded those products for slaves. In the West Indies they traded slaves for more molasses.  The triangle continued when New England distillers made the molasses into more rum.

This three point trading arrangement was an important part of colonial commercial life & prosperity.  Almost every important town from Massachusetts to the Carolinas had a rum distillery. They met the local demand, which had increased dramatically.

Burns, E. The Spirits of America. A Social History of Alcohol. Philadelphia. Temple U Press, 2004.