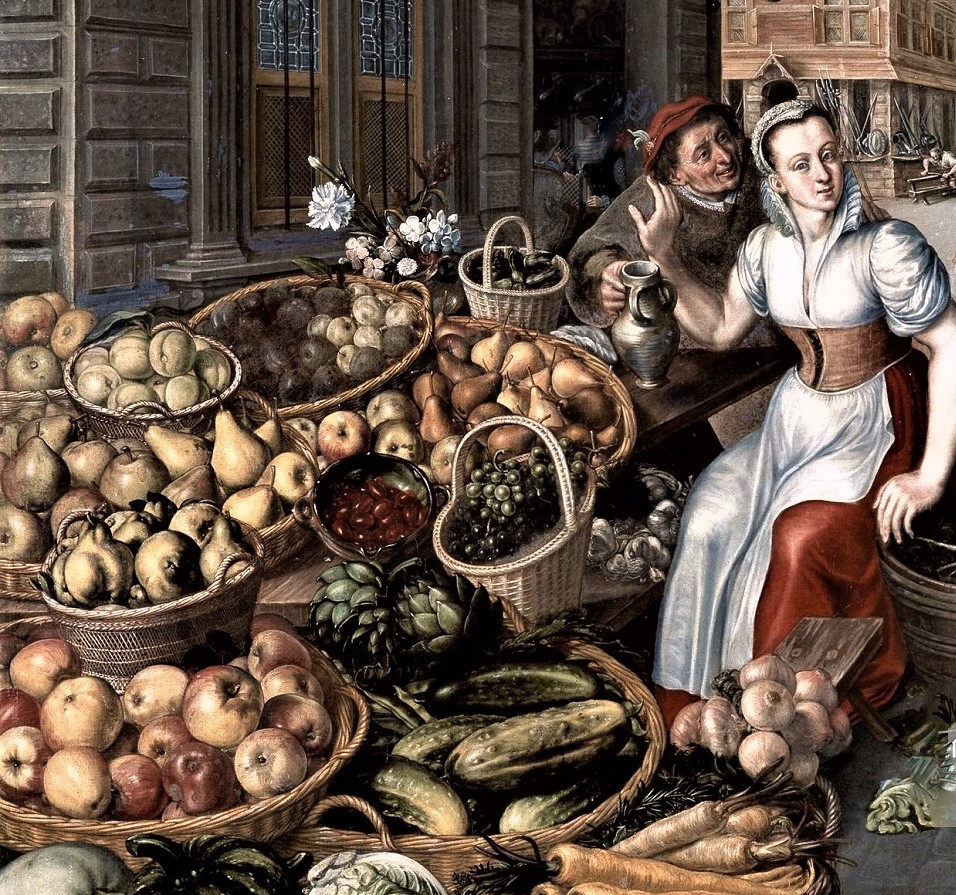 Flowers are formed to please the eye & indulge the fancy; but fruits are a healthy & important article of food. Some women sell fruit in market; some, at stalls in the street; some, in fruit shops or groceries, & some, from baskets, going from house to house.

Most dispose of small fruit, such as berries —some wild & some cultivated. The ferries in large cities are very good stands for sellers of fruits & sweetmeats. Places of amusement & the entrance to cemeteries, are also.

I talked to one apple woman, who says her business is a slavish one. Her stand was at the Atlantic ferry, New York. When she goes to her dinner, she gets the gate keeper to mind her stand. She earns, on an average, $1 a day. She rises, gets her breakfast, & starts to market by five o'clock. She remains at her stand until nine o'clock at night. She sells the greatest quantity of fruit in the spring & fall, when people are most apt to be making money, & so permit a little self indulgence. She sells least in winter.

I saw a woman on the street selling fruit & flowers. When she is out all day, she can generally earn from fifty cents to $1. Another fruit seller told me that she makes a good living. She has been at her stand eight years. She sells most fresh fruit in summer; & in winter, about the holidays, most dry fruit & nuts. In the coldest weather she remains in her basement, heated by a stove, where she stores her fruit at night. Her grapes are brought in on the cars, put up in pasteboard boxes. Her location is excellent, for the working class of people pass in the evening, returning from work, or in their promenades.

I talked with an old woman at an apple stand, who told me she often sells $1 worth of articles in a day, but seldom makes a profit of more than half. She seils most fruit in summer, but most cigars, candy, & nuts in winter. She says there is a stand on every block, in that part of New York. Hers is a good location, because so many men pass. In wet weather, she does not sell much. She is shielded in winter, by sitting in a hall near, where she can keep an eye on her stand. She lives near, & while she goes home to dinner, her husband sells for her.

An apple woman, in New York, told us, she has kept her stand in Washington park for seven years. She remains at it all the year. If any other fruit vender should trespass on her bounds, a policeman would soon send him or her off. Another old woman, keeping a fruit stand, told me she makes a comfortable living at it in summer; but in winter she stays in a confectionery store, & gets $10 a month & her board.

At another fruit stand, on asking the old lady how she got on, she burst into tears, & replied, very poorly, scarcely made enough to keep her alive. A professional honor exists among fruit women, & a desire to sustain each other in their rights. A wholesale fruit dealer writes me that it takes from two to four years to learn the business, when carried on extensively.