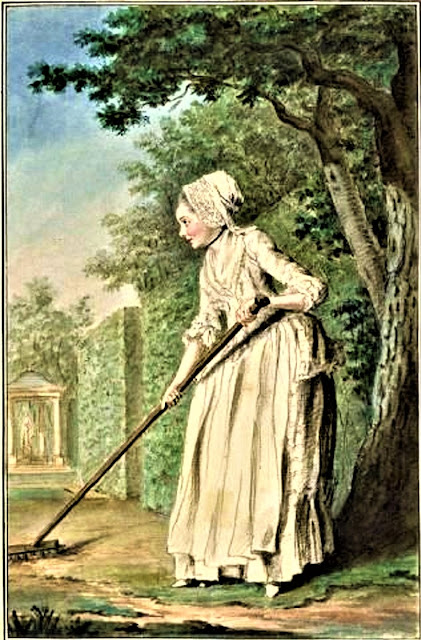 Image of Duchess of Chaulnes as a Gardener in an Allee, by Louis Carrogis de Carmontelle

The strength and energy of people, in northern climates, have led them to excel in the rearing of fruit --not in imparting a more delicious flavor, but in the quantity, the fullness, and the size of the fruit.

In the balmy air and under the sunny sky of the South, vegetation develops more rapidly and more luxuriantly. He who adds to the list of beautiful and fragrant flowers, or improves some variety of fruit, enlarging, or rendering it more luscious, will be remembered as a benefactor.

Gardening is a pleasant and healthy occupation to those that love outdoor life. A woman can no more be healthful and beautiful without exercise in the open air, than a plant can when deprived of air and light.

We learn, from Mr. Howitt's “ Rural Life in England,” that“ there are on the outskirts of Nottingham, upward of five thousand gardens, each less than the tenth of an acre. The bulk of these are occupied by the working classes. These gardens are let at from half a penny to three halfpence per yard.”

German women are often employed, near cities, to weed gardens, gather vegetables, & other such work. “In Hereford, England, there are no fewer than six annual harvests, in each of which children are largely employed : 1, bark peeling ; 2, hay; 3, corn, 4, hops; 5, potatoes; 6, apples; 7, acorns. Add to these, bird keeping in autumn & spring, potato setting & hop tying, & the incidental duties of baby nursing & errand going.”