Slave Gardeners in the Mid-Atlantic & South

Enslaved African Americans were the backbone of the garden labor force throughout much of the Mid-Atlantic and Southern gardens planted for both pleasure and use. This pattern persisted throughout the colonial period. After the Revolution, as indentured & convict servants were absorbed into the regular labor pool in America, slaves became even more important as gardeners.

African American slaves were very familiar with sustenance gardening, even if they worked as a field slave or a house servant during the daylight hours. Many slave owners in the 18th century allowed their workers to layout & plant small gardens to supplement the usually meager food provisions allocated to the field slaves. Some masters intentionally delegated a common plot of ground for this purpose near the slave quarters. Slaves would prepare their garden plots after sundown and on Sundays, when most had a lighter work schedule.

The procedures & problems associated with planting & harvesting herbs & vegetables were the same for both groups of gardeners. The the slaves knew the challenges well, since some on each plantation helped plant & maintained the gardens of their masters. Nature makes no class distinctions. It was inevitable that enslaved African Americans would become the backbone of both the pleasure garden and the kitchen garden labor force.
It may have started with growing tobacco, but turned to growing fruits & vegetables and planning more elegant landscape gardens by the 18th-century.  Slaves working with tobacco in Virginia, attributed to an unknown artist, 1670.

In South Carolina during the 1740s, several runaway notices mentioned gardeners, both enslaved and serving under an indenture. RUN away, an old Negro Man...is a Gardener (South Carolina Gazette, May 26, 1746).

In 1756, John Swift, a merchant in Market Street, Philadelphia, advertised for sale a young "Negroe man" who "understands gardening." Two slave gardeners were auctioned at the London Coffee House in Philadelphia on July 6, 1769. When John MacPherson decided to sell his plantation in Northern Liberties, on the Schuykill, he also auctioned off his two "young healthy" slave gardeners in 1769.

In 1769, William Bethune, identified as a gardener of Charleston, South Carolina, sells two garden slaves to Daniel Cannon, a carpenter.

A June 1773 issue of the Pennsylvania Gazette carried an advertisement for the sale of "Three healthy likely Negroe men" capable of attending a garden. A notice in the same newspaper in 1782, advertised for the return to John Churchill of Fauquier County in Virginia of a "likely Virginia born Slave named Jacob" who was well acquainted with gardening.

As Edward Lloyd IV designed & planted his Annapolis gardens in the 1770s, he, too, supplemented his indentured garden staff with slave gardeners, as had Dr. Henry Stevenson; when he installed the terraced falls & geometric flat garden at his Baltimore County seat, Parnassus, in the 1760s.

In Virginia, the Williamsburg gentry vied for the service of James, the slave of Nathaniel Burwell. He served under four head gardeners at the Governor’s Palace. Governors Botetourt (Norbonne Berkeley) & Francis Fauquier paid the Burwell family 12 pounds per year for his services, & Governors Dunmore (John Murray) & Patrick Henry each paid 14 pounds a year for his expertise. James was a master at pruning fruit trees, transplanting native seedlings, & forcing plants in hot beds & bell glasses.

On April 5, 1777, Virginia plantation owner Landon Carter, having surveyed his newly green fields & budding trees & just about able to taste the strawberries setting flower in his garden, wrote in his diary, “My gardiner now 5 days weeding his Strawberry beds & not yet half done them. They must be well whipt.”

Quomina was listed as a slave gardener at the Snee Plantation of Charles Pickney, when Pickney died in 1782. 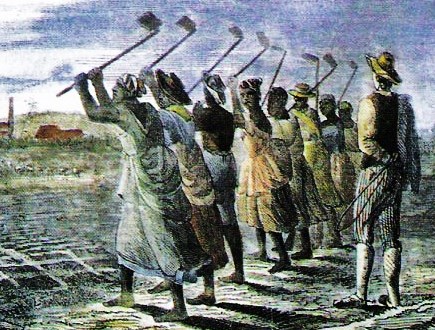 African American slaves were often purchased by the new crop of professional white gardeners & plant merchants who appeared in growing numbers throughout the Mid-Atlantic & South after the Revolution, to tend their nursery gardens, sell their stock at market, & maintain the gardens of their regular clients. These new garden entrepeneurs, usually freshly arrived from overseas, knew they could learn from their enslaved servant gardeners, who had been tending America's gardens for decades.

After the death of longtime South Carolina gardener, John Watson, his sons James Mark & John carried on his nursery business until 1802, when John left South Carolina for health reasons. The Charleston Times ran the following notice on April 30, 1802. “The Subscriber BEING obliged to leave the country on account of his bad state of health, offers his handsome retreat for sale...the land is in the highest state of cultivation, both with vegetables and as complete a Nursery as Carolina can produce. He likewise offers his valuable NEGRO FELLOW, complete gardener and understands perfectly the management of raising, grafting, budding, and pruning of trees-it is unnecessary to mention any particulars about him, as he is well known in this city, JOHN WATSON.”

In the 1790s, visiting English agriculturalist Richard Parkinson insisted that, of all of the help he had to hire outside of his immediate family, white agricultural & garden labor was inferior to black labor, “for all the white men I employed there ate much & worked little…the black man or slave is both clothed & fed at less expense than a white man…they bear the heat of the sun much better than any white man, and are more dexterous with the hoe.”
Benjamin Henry Latrobe (English-born American artist, 1764-1820).  An Overseer Doing His Duty, sketched from life near Fredericksburg, 13 March 1798

Craftsman William Faris owned several slaves over the period of his residence in Annapolis. His most constant gardening companion during the 1790s was his slave Sylva. Parkinson wrote of the advantages of buying female slaves, less expensive than males, to assist in Mid-Atlantic & Upper South agricultural pursuits. He noted that they could perform gardening tasks as well as male slaves, & “the women will be a saving…in the first place, & they will wash & milk.” Faris did indeed use Sylva to cook & help with general housework as well as to work regularly as his primary gardener during the growing season.

In Virginia, George Washington employed both male & female slaves in creating his garden. A 1799 visitor to Mount Vernon wrote, “Here many male & female negroes were at work digging & carrying away ground to make a level grass plot with a gravel walk around it.”

Records show Stephen Bordley spending 3 hours each day during the growing season with his slave head gardener on his Wye Island plantation. Annapolitan Charles Carroll kept slaves at his Doughoregan Manor plantation to tend the gardens including Jack & Harry who appear in Carroll inventories as gardeners.

Both Faris & Parkinson also rented the male slaves of others to assist with garden labor. Many slaves who worked in gardens were “hired” on a short-term basis. Hiring out was a system in which a gardener would temporarily lease a slave from an owner. In this system, slave owners generated revenue from their slaves’ labor without having an investment in the actual work itself. Specialized slaves, such as seasoned garden workers, were more likely to face weekly, monthly, or yearly hiring than being permanently sold.  Such slaves and the variety of jobs reflected not only the flexibility of slavery but also the importance of slaves as capital for owners.

The hiring-out system generated a potential tension between hirer and owner.  Slave renters wanted to make the most out of a short-term investment; owners wanted to protect their long-term capital. Contracts typically placed the burden of clothing, food, and shelter on the hirer.

Physical distance between hirer and owner gave hired slaves an opportunity to influence their own experience, and this daily resistance undermined the hirer’s authority. Parkinson’s writings give a glimpse into the lives of the slaves he rented in Baltimore in the late 1790s, “Though you have them slaves all the day, they are not so in the night. All the black men I employed used to be out all night & return in the morning.”

No matter how the rented slaves spent their nights, they were expected to begin working vigorously the following morning. Shortly after Faris employed his neighbor Mrs. Brewer’s slave Harry, the craftsman wrote in his diary, “Man Harry crawled Home this morning between 6 & 7. Went to Working Dung on the older bed by the Walnut Tree.”  Many slaveholders questioned the safety of hiring out because in practice it gave slaves some slight power in who they worked for and under what terms.

By the end of the 18th century, Maryland slaveowner James Moss wrote in his journal, that his slaves raised thousands of watermelons on his plantation. His slave Mingo took them to market to sell in Baltimore after each harvest.

In November of 1803, Rosalie Steir Calvert of Riversdale in Prince George County, Maryland, wrote her mother, “My gardener John works as hard as four people—he is a good man.” John was one of the slaves from her husband George Calvert’s plantation, Mount Albion. However, in early 1805, Rosalie Calvert was unable to control her husband's slave gardener and wrote, “I had to dismiss my gardener John because he had become so insolent. He has been back three times since, begging me to take him back.” Perhaps life as a garden slave was more desirable than life as a field slave.

Unfortunately, very little is known about most slave gardeners, like the following South Carolina gardener. In her will proven on November 21, 1815, Rebecca Motte of Elderado Plantation in the parish of St. James Santee left to her son-in-law, Major Thomas Pickney and his wife, her daughter Frances, a slave gardener named Adam from that plantation.