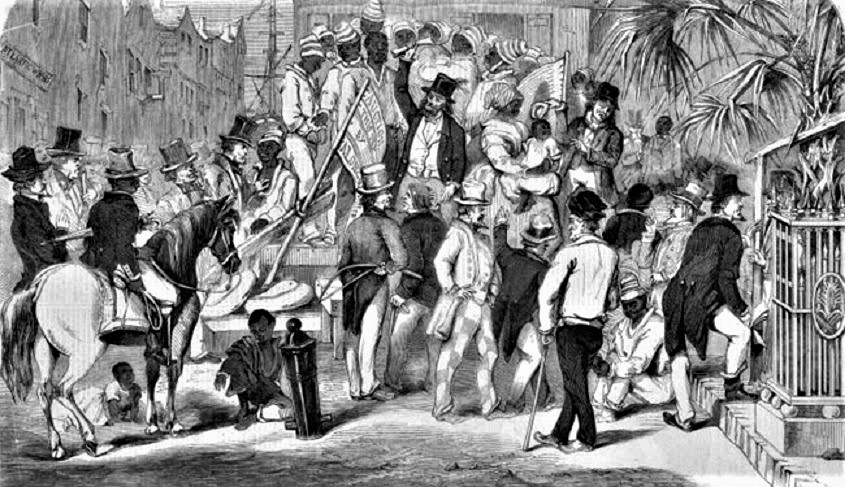 Philadelphia merchant, Pelatiah Webster (1725-1795), wrote of his business trip to the city in 1765, "The laborious business is here chiefly done by black slaves of which there are great multitudes...Dined with Mr. Liston, passed the afternoon agreeably at his summer house till 5 o’clock P. M. then went up into the steeple of St. Michael’s, the highest in town & which commands a fine prospect of the town, harbour, river, forts, sea, &c...The heats are much too severe, the water bad, the soil sandy, the timber too much evergreen; but with all these disadvantages, ’tis a flourishing place, capable of vast improvement."
Pelatiah Webster, Journal of a voyage from Philadelphia to Charles Town, May-June 1765

Philadelphia merchant, Pelatiah Webster kept a daily journal of his two-month business trip to Charles Town.  T. P. Harrison, ed., “Journal of a Voyage to Charlestown in So. Carolina by Pelatiah Webster in 1765,” Publications of the Southern History.  Association 2:1 (January 1898), pp. 131-148.

The State-House is a heavy building of about 120 by 40 feet. The Council Chamber is about 40 feet square, decorated with many heavy pillars & much carving, rather superb than elegant. The assembly room is of the same dimensions, but much plainer work, ’tis convenient enough.

The streets of this city run N. & S., and E. & W., intersecting each other at right angles. They are not paved except the footways within the posts about 6 feet wide, which are paved with brick in the principal streets.

There are large fortifications here but mostly unfinished and ruinous. There is a pretty fort on James Island called Johnson’s fort  which commands the entrance of the harbour . . .

The laborious business is here chiefly done by black slaves of which there are great multitudes.  The climate is very warm; the chief produce is rice & indigo; the manufacture of hemp is set afoot & likely to succeed very well. They have considerable lumber and naval stores [tar, pitch, and turpentine]. They export annually 100,000 barrels of rice & 60,000 lbs. indigo, . .

The[y] have no considerable seminaries of learning [colleges], but many youth of quality go to London for an education. The people are vastly affable and polite, quite free from pride, & a stranger may make himself very easy with them. . .

Wedsday 29 [May 1765]. Still sauntering about town as much as the great heats will permit. Dinner with Mr. Tho[mas]. Smith, a reputable merchant in this town & in very fine business: is an agreeable sensible kind man: passed my time with him very pleasantly several hours.

Thursd. 30. Dined this day with Mr. John Poaug, a Scotch merchant in this City, a very genteel polite man. . .

Monday, 3 [June 1765]. Dined this day with Mr. Thomas Liston, a reputable merchant born here: is a man of great openness & politeness, of generous sentiments & a very genteel behaviour: passed the afternoon very agreeably in his summer house with him & Mr. Lindo, a noted Jew, inspector of Indigo here.

Tuesd. 4. The militia all appeared under arms, about 800, & the guns at all the forts were fired, it being the King’s Birthday. The artillery made a good appearance and performed their exercises and firings very well. The militia were not so well trained & exercised but made a pretty good & handsome appearance. N. B. [nota bene; note well] The militia & artillery of Charlestown are said to consist of 1300 men in the whole list from 16 to 60 years old. . .

Saturday 8. Very hot. Met with disappointment in the sale of my flour which lies on my hands & I fear I must leave it unsold or expose it to vendue [auction] with loss of what I have procured with long pains & industry: my mind is somewhat depressed.  Dined with Mr. Liston, passed the afternoon agreeably at his summer house till 5 o’clock P. M. then went up into the steeple of St. Michael’s, the highest in town & which commands a fine prospect of the town, harbour, river, forts, sea, &c. . . .

Tuesday 11. Sold 12 BBl. flour at £4 [four English pounds] currency pr. ct. which is about first cost to Mr. Peter Boquet & the rest. Mr. Liston procured me a sale of at 90/ pr. ct. So I am over the difficulties of my sales. Dined with Mr. Liston, Capt. Bains from London & Mr. Head. Passed the evening at the Reverend Rob[er]t Smith’s.

Wednesday 12. Spent most of this day in settling my little accounts business], exchanging my monies into dollars. The season is gay but the air sultry, yet cooled by frequent squalls of wind & rain. Passed some hours in Mr. Liston’s summer house and the evening with Mr. Glen.

Thursd. 13. See an alligator of which there are many in the rivers & bays in this country. They are made much like what is called swift in N[ew] ngland. This I see was about 3 feet long & three inches diameter in
the body: his skin was scaly much like a snake, his mouth very large and cavernous, his teeth irregular, long, partaking partly of those of fish & partly of those of a dog. Some of these amphibious animals here are surprisingly large & 15 or 18 feet long. . .

Friday 14 [June 1765]. A hot sultry day. Went with Mr. Liston in a boat to Sullivan’s Island where there were 2[00] or 300 Negroes performing quarantine with the small pox. This island is 7 miles E. from the town, about 4 miles long, very sandy, hot, and barren, though there are some groves of
trees in it. There is a pest-house  here with pretty good conveniences. The most moving sight was a poor white man performing quarantine alone in a boat, at anchor ten rods from shore, with an awning & pretty poor accommodations. . .

Sat. June 15. Warm & sultry. Dined with Mr. Liston, & passed the forenoon at the library. Passed some hours this afternoon with some Guinea captains,  who are a rough set of people, but somewhat carressed by the merchants on account of the great profits of their commissions. Spent the evening in walking and smoked a pipe at Mr. Glen’s.

Tuesday 18. . . . embarked on board the brigantine Prince of Wales, Thomas Mason, Commander, for Philadelphia; took leave of all my Charlestown friends. At 4 P. M. made sail: at 7 anchored off the fort, not being to get over the [sand] bar. I have Mrs. Phanny Johnson an infant of 5 years old in my care for the voyage. She is a fatherless child & bound to Philadelphia in her way to Quebec to her grandfather, the Rev’d. Mr. Brooks, who has sent for her.

Now I have left Charlestown, an agreeable & polite place in which I was used [treated] very genteely & contracted much acquaintaince for the time I stayed here. The heats are much too severe, the water bad, the soil sandy, the timber too much evergreen; but with all these disadvantages, ’tis a flourishing place, capable of vast improvement: will have, I fear, some uncomfortable bands of banditti on its frontiers soon, its distance from proper authority having already drawn there great numbers of very idle dissolute people who begin to be very troublesome.

Pelatiah Webster, while not known for his gardening efforts, was the author of a number of thoughtful and accurate pamphlets on the potential finances and government of the United States, most of which he reprinted in his “Political Essays” in Philadelphia in 1791. He was such an ardent supporter of the patriot cause, that the British imprisoned him for 4 months in Philadelphia; before they were dispatched back to the beautiful emerald isle..
at 4:00 AM