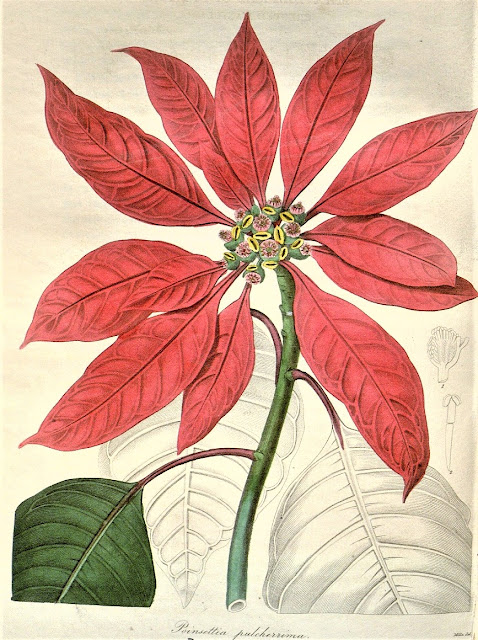 The Cuetlaxochime were sacred plants in what is now known as the early America Western Hemisphere that were used in ceremonies to celebrate the birth of Huitzilopochtli during winter solstices. They were also used for medicinal and healing purposes to cure sicknesses, aid the flow of breast milk, as well as for dyeing fabrics. Pronunciation: Kwe•tla•so•cheetl
"It is a little known fact that the poinsettia was introduced to the gardening world from the Bartram Botanic Garden in 1829. This international symbol of winter cheer was first successfully grown outside its Mexican homeland by Robert and Ann Bartram Carr at the Bartram’s Garden in Philadelphia. The plant now known as poinsettia, Euphorbia pulcherrima, is native to the pacific coast of Mexico and has an ancient history of human use. It was almost certainly seen by early European explorers and colonists, but somehow never entered cultivation in Europe. It was re-discovered or at least brought to the attention of the outside world in the 1820s by an American, Joel Roberts Poinsett (1778-1851).

"Poinsett, a native of Charleston, South Carolina, held various diplomatic and political positions through his life, but always continued a strong interest in natural science and horticulture. He first served as a special envoy to Mexico in 1822-1823, and when the new Mexican Republic was recognized in 1824, Poinsett was first U. S. Minister Plenipotentiary. He resided in Mexico from 1825 to early 1830. During this period, perhaps in the winter of 1827-1828 Poinsett encountered the unnamed plant that now bears his name.

"As part of his mission to expand cooperation between the two countries, Poinsett shipped plants and seeds between Mexico and the United States. At present there is evidence that four different collections of seeds and plants were sent from Mexico to Bartram’s Garden in Philadelphia in the period 1828-1829. Poinsett was elected a member of the American Philosophical Society in Philadelphia in early 1827, and this seems to have cemented his connection with the Philadelphia scientific community and with Bartram’s Garden .In early 1828, William Maclure, a longtime friend of Poinsett, and Thomas Say, a Bartram nephew, travelled to Mexico, visiting Vera Cruz and Mexico City. William Keating, a geologist from the University of Pennsylvania also traveled to Mexico in 1828 to prospect for American mining interests. Poinsett, Maclure, Say, and Keating all arranged for Mexican seeds of plants to be sent to Bartram’s Garden.

"Thomas Say sent over a hundred varieties of seeds from Mexico, “of my own collecting” in a letter to Robert Carr dated July 23, 1828. This list is in large part made up of fruits and vegetables offered in the markets in Mexico, but some trees, shrubs, and herbaceous plants from the wild were included, notably several forms of cactus. William Maclure returned briefly to Philadelphia in the fall of 1828, and he brought yet more Mexican seeds and plants with him. This is the most likely route for plants of the poinsettia to Bartram’s Garden.

"Robert Buist, a Philadelphia nurseryman, remembered seeing the first poinsettia roots unpacked at Bartram’s Garden in 1828: “On my arrival in this country from the Royal Botanic Gardens in Edinburgh, in 1828, I paid a visit to the famed “Bartram Botanic Garden,” and there saw two cases of plants which had just arrived from Mexico. Among the contents were the stumps of a strange-looking Euphorbia, which, after a few months’ growth, showed some very brilliant crimson bracts.” (The young Buist soon built a very successful career on the new scarlet plant, and as a result he was credited with the introduction of the poinsettia to Europe in 1834.)

"The paper trail of the poinsettia next appears at “The first semi-annual Exhibition of fruits, flowers and plants, of the Pennsylvania Horticultural Society,” held June 6, 1829. This was the first public show of the PHS, a tradition continued today as the Philadelphia Flower Show. One of the noteworthy exhibits was “A new Euphorbia with bright scarlet bracteas or floral leaves, presented to the Bartram collection by Mr. Poinsett, United States Minister to Mexico.” There can be no doubt that this was the poinsettia, now known as Euphorbia pulcherrima. The plant on display, apparently the original sent from Mexico, was still colorful in early June. And while we now take for granted the connection of poinsettias and Christmas, it would take a while for nurserymen to reliably flower the new scarlet plant in time for the early winter holidays.

"A year later, in July 1830 a committee of the PHS, “For visiting the Nurseries and Gardens in the vicinity of Philadelphia,” made particular note of the “Euphorbia heterophylla, with its large scarlet flowers,” as well as “some curious species of Cactus, lately received from Mexico” at the Bartram Botanic Garden. At this early stage, the appropriate scientific name for the poinsettia was still in doubt. Poinsettia resembled a known North American native, Euphorbia heterophylla and so for a time it was referred to under that name. Philadelphia nurserymen also used the name “Poinsett’s euphorbia” and around 1832 Robert Buist began using “Euphorbia poinsettia” for the new plant. Between 1833 and 1836 the poinsettia went through a rapid series of scientific names as it was described and published in the US and Europe—first Pleuradena coccinea, then Poinsettia pulcherima, and finally Euphorbia pulcherima. (Although there is still some debate whether some North American Euphorbia species should be split off into a new genus Poinsettia.)

"In the summer of 1833, the botanist Constantine Rafinesque published the first scientific description of the poinsettia in Philadelphia, for his Atlantic Journal. Rafinesque recorded the brief history of the plant in Philadelphia to date: “The Botanical Garden of Bartram received some years ago from Mr. Poinsett our ambassador in Mexico, a fine new green-house shrub, akin to Euphorbia, with splendid scarlet blossoms, or rather bracts. It has since been spread in our gardens near Philadelphia, and is know in some as the Euphorbia Poinseti; but appears to me to form a peculiar genus or S. G. at least”

"In the early 1830s Robert Buist began sending plants or cuttings of poinsettia to Europe, and particularly to his friend James McNab at the Edinburgh Botanic Garden. Buist had trained at the Edinburgh garden, and he returned to Scotland in 1831 to acquire stock for his new nursery business. James McNab also visited Philadelphia, and Bartram’s Garden in the summer of 1834, and probably took the first successful poinsettia plants back with him to Edinburgh in the fall.

"The poinsettia flowered in Edinburgh for the first time in the spring of 1835, but imperfectly. When it flowered again in 1836 it was drawn for Curtis’s Botanical Magazine. The new euphorbia was re-named Poinsettia pulcherrima by Robert C. Graham, Regius Professor of Botany at Edinburgh, in an article prepared both for Curtis’s and the Edinburgh New Philosophical Journal. The modern common name “poinsettia” arose from Graham’s description, and as the plant spread rapidly in cultivation in the UK and Europe it was known under the name poinsettia. Unfortunately for history, Graham relied on Buist’s own incorrect account of the introduction of the plant, and omitted any mention of the Carrs or Bartram’s Garden. (Graham’s new genus Poinsettia has since been returned to Euphorbia.)

"It has long been the story that Poinsett personally introduced the poinsettia first to Charleston, bringing the plant on his return from Mexico, and from there it was discovered or sent to the Carrs in Philadelphia. This is impossible for the poinsettia was shown to the Philadelphia public in June of 1829, over six months before Poinsett returned from Mexico. All available evidence suggests that the poinsettia was first sent to the Bartram Garden in Philadelphia in the fall of 1828. The successful transport of live plants from Mexico to Philadelphia in 1828 was almost certainly due to the fact that a number of friends of Bartram’s Garden were on the scene in Mexico. After the new scarlet euphorbia was introduced to the public in 1829, the plant was widely propagated, and became a popular mainstay of the Philadelphia florist trade. The young gardener, Robert Buist, returned to Europe in 1831 and found the scarlet flower was unknown. Buist was a great popularizer of the new plant, but has undeservedly received major credit for its introduction. When Poinsett began to grow his namesake plant in Charleston after his return, it probably returned to him via the Philadelphia nursery community." 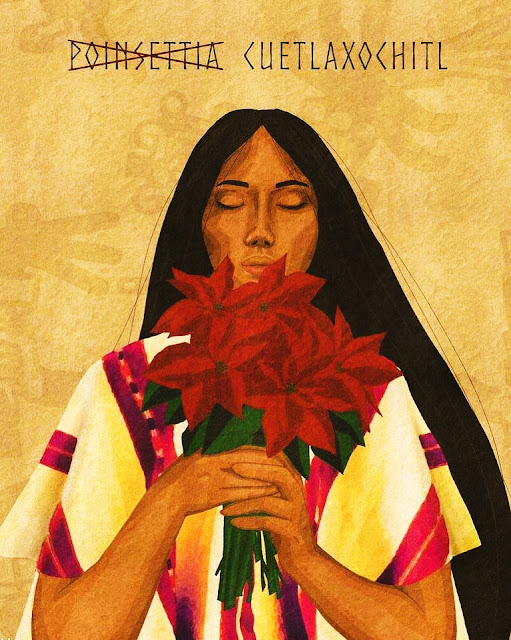 A little more to the tale...

Poinsettia plants are native to Central America, especially an area of southern Mexico known as 'Taxco del Alarcon,' where they flower during the winter. The ancient Aztecs called them 'cuetlaxochitl'. The Aztecs had many uses for them including using the flowers (actually special types of bright leaves known as bracts rather than flowers) to make a purple dye for clothes & cosmetics The milky white sap, latex,was made into a medicine to treat fevers.

Poinsettias were cultivated by the Aztecs of Mexico long before the introduction of Europe's Christianity to the Western Hemisphere. These plants were highly prized by Kings Netzahualcyotl & Montezuma, but because of climatic restrictions could not be grown in their capital, which is now Mexico City.

Perhaps the1st religious connotations were placed on poinsettias during the 17C. Because of its brilliant color & convenient holiday blooming time, Franciscan priests, near Taxco, began to use the flower in the Fiesta of Santa Pesebre, a nativity procession.
The poinsettia may have remained a regional native American sacred plant for many years to come had it not been for the efforts of Joel Roberts Poinsett (1779 – 1851). The son of a French physician, Poinsett was appointed as the first United States Ambassador to Mexico (1825-1829) by President James Madison. Poinsett had attended medical school himself, but was a dedicated, almost obsessive botany-lover.

The Poinsettias is native to southern Mexico & Mesoamerica, unlike today’s commercial cultivars, grow into straight& tall trees. Often these trees can reach heights up to 10 feet tall. Through selection & breeding by growers, many cultivars have been developed in the United States & Europe.

After its introduction in Philadelphia, the "poinsettia" was shipped around 19C United States during the 1800's, usually as an outdoor plant for warm climates.
Around 1920 in southern California, a horticulturist named Paul Ecke became the next key person to promote the poinsettia. He felt this shrub growing wild along roadsides would make a perfect Christmas flower, so set about producing these in fields in what is now Hollywood.
A few years later, due to the commercial & arts development in Hollywood, he was forced to move south to Encinitas, where the Paul Ecke Ranch produced poinsettias. Through the marketing efforts of Paul Ecke and his sons, the poinsettia became symbolic with Christmas in the United States.
"On July 20, 2002, the House passed H. Res 471 designating a National Poinsettia Da on December 12, the day of the death of Joel Poinsett, as National Poinsettia Day to commemorate man and the native Mexican Aztec plant.
at 4:00 AM