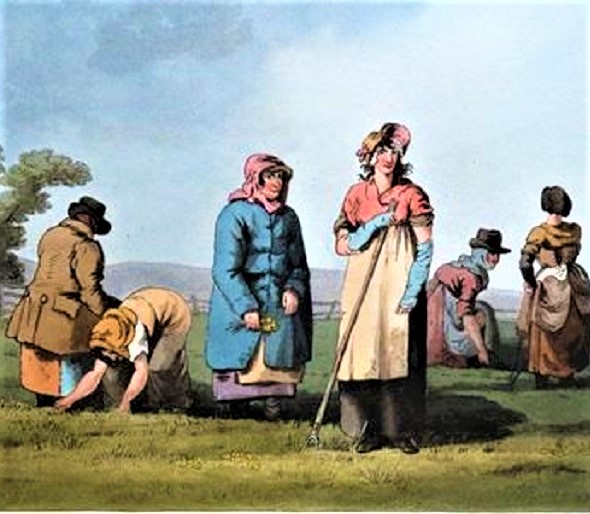 When the grass is bowed by the sparkling dew, & the hills shrouded in mist, plants exhale most freely their sweet odors. They are then gathered & sold to manufacturers, who prepare from them oils, essences, & perfumeries.

An old Quaker lady on Tenth street, Philadelphia, keeping an herb store, told me that she purchases her herbs mostly of men, but some women do bring them to sell.

It requires a knowledge of botany to gather them, & the stage of the moon must be observed. Digging roots, & gathering plants, at all seasons, is a hard business.

At another herb store, Í learned that the prices paid gatherers depend much on the kind of herb, the difficulty of obtaining it, & the season when it is gathered. A woman may earn $1 a week, or she may earn as much as $10.

The roots & herbs are bought by weight. Many are purchased fresh in market, but some of the gatherers dry them. They are sent from different parts of the Union to the cities & towns. One told me that she would rather purchase herbs & seed put up by women, for they are neater & more careful with their work. She sells most in spring & fall. An Indian doctress told me barks must be gathered in the spring & fall, when they are full of sap; & roots, when the leaves are faded or dead. She sometimes makes $20 worth of syrup in a day. She says the business requires some knowledge of plants, experience in the times of gathering, amount of drying, &c.