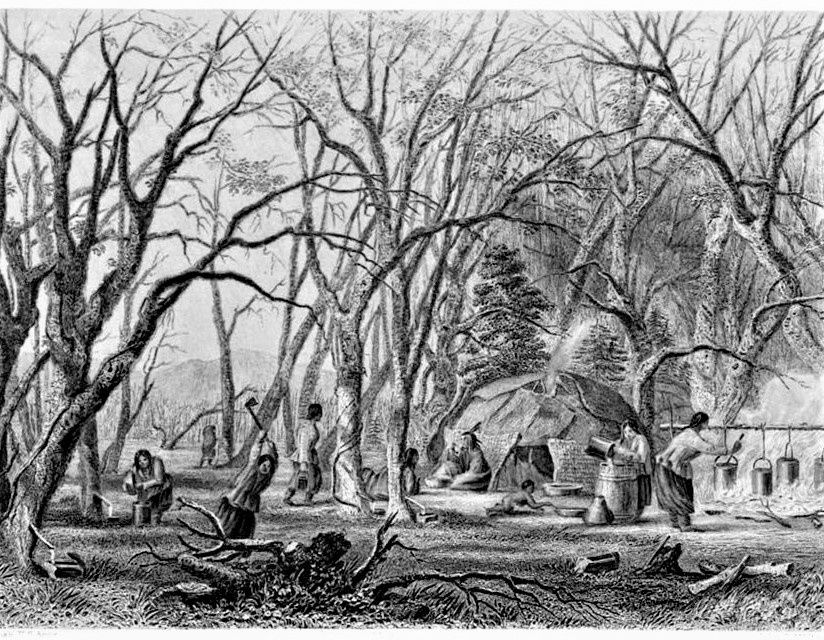 “Indian sugar camp (Maple Syrup) - Capt. S. Eastman, U.S. Army” John C. McRae. , engraver; 1853; courtesy of Library of Congress.
When European colonists settled the Atlantic coast of North America, area, they learned how to tap maple trees from the indigenous people. However, instead of using a wedge to extract sap, they would drill holes in the trees using augers. They would then insert wooden spouts into the holes and hang buckets from them to collect sap. Colonists made these buckets by hollowing segments of a tree to create a seamless container

Women who live in the country, & have small fruit, would find it pay well to make cordials, berry vinegars, &c. There are some establishments where it is made, & women are employed to gather the fruit.

The people of the Southern States have depended on the North for these articles, but we presume a change will be wrought. The abundant growth of small fruit in the South will enable the South before long to meet the demand. We think there will be many openings of this kind, in the South & West, for many years to come.

Some manufacturers of ginger wine, bitters, syrups, cordials, & grape wines, write: “In reply to your circular we say-We do not employ any women in our business, although we indirectly furnish employment for several hundred, during the various fruit seasons, in gathering most kinds of fruit, which we use in our business. Many of these fruits are wild, which we buy at a specified price. The gatherers control their own time, & their earnings will vary from fifty cents to $1 each, per day. It would probably require the labor of abcut six hundred for six months of each year, in gathering the amount of fruit which we use. But as we do not directly employ them, or know anything about the general business of those thus employed, we are unable to give further particulars.”