Indentured & Convict Servant Gardeners Rented Out in the Mid-Atlantic & South

Mid-Atlantic & South landowners commonly rented the unused time of their indentured gardeners to others. The practice of renting out servants & slaves with special skills allowed those who could not afford to buy an entire indenture or a slave to have an opportunity to use their expertise in the planning & installation of their gardens or to undertake special projects without a large capital outlay. 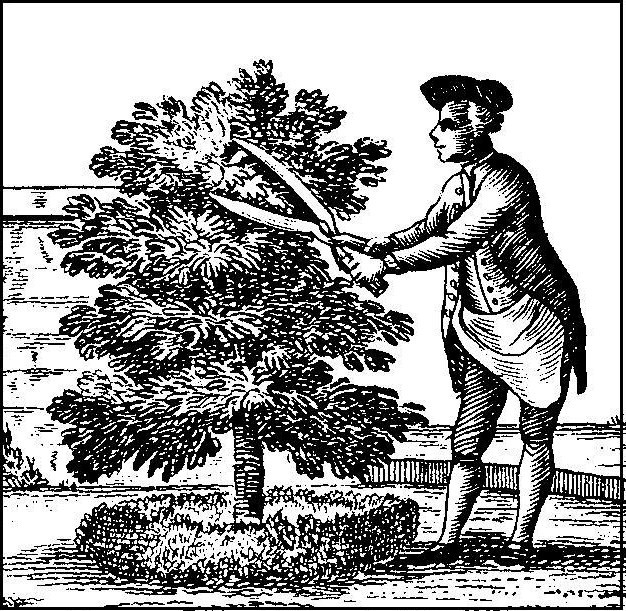 In May 1738, Sarah Blakeway advertised in the South Carolina Gazette that she had a gardener to hire out. Blakeway was apparently a planter of some importance in her own right. She often advertised in the newspaper for slaves to hire out, houses for rent, Indian corn and land for sale. In 1741, she announced her intention to leave the province selling her land, slaves, piano, mahogany chairs, beds, and books.

In 1750 Philadelphia, William Sellars in Letitia Court advertised in the Pennsylvania Gazette to sell the time of his English indentured servant. The servant had 4 years left to serve on his 7 year indenture, and he understood "gardening very well."

Two years later, another English indentured servant, a 22 year old "gardiner by trade who understands the management of trees" was offered for sale for about 3 1/2 years of the remainder of his contract. Inquiries about buying his time could be made at the Philadlephia New Printing Office.

Occasionally, landowners simply lent idle or unfriendly garden servants to family & friends. In the spring of 1751, in Williamsburg, John Blair Sr. (1687-1771) lent to Peyton Randolph (1722-1775) his gardener, of whom “Mrs. Randolph gave a fine account.”

The servant had a history of picking fights with Blair’s slaves; & in the end, apparently Blair valued his slaves more that his feisty gardener. Shortly after the servant’s return, Blair “ordered the gardener to go, for I couldn’t bear him.”

In 1752, Maryland's Provincial Secretary Edmund Jennings & his wife Catherine of Annapolis, attempted to sell the time of their indentured gardener, noting that he was “an extraordinary good Gardener… understands the laying out of new work or anything belonging to a Garden.”

Even the wealthy rented the services of others’ skilled workers, when they undertook extraordinary projects. Charles Carroll of Annapolis (1702-1782) rented two servant gardeners in 1770. He wrote to his son, “I will give Colonel Sharpes Gardener 3 pounds per month computing 26 Working days to the Month & I will allow the Man who Works with Him 40/ per month if He be a good Spadesman.”

When these particular rented servant gardeners arrived at the Carroll home in Annapolis, the elder Carroll was less that enthusiastic, “Mr. Sharpes…Gardener…I do not like His looks as they are very Scottish, He may buy Rum.”