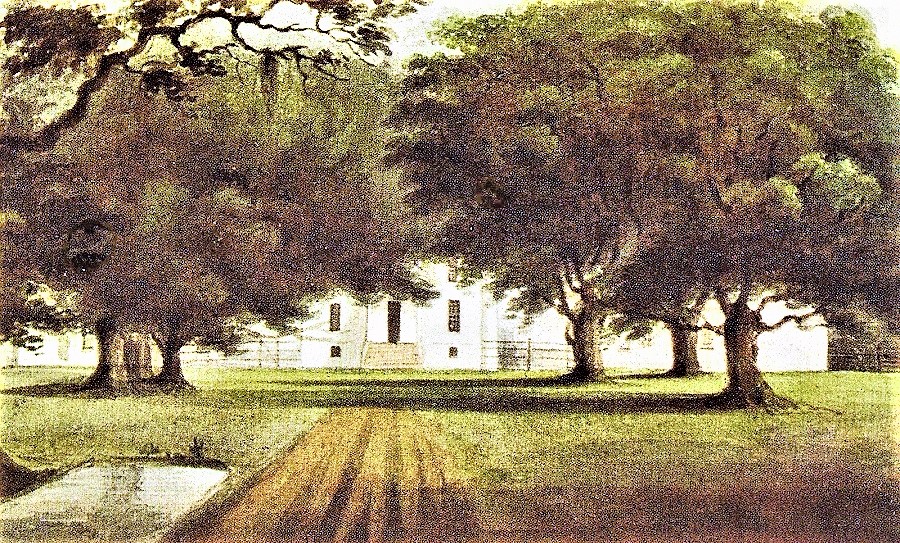 Entrance to Ashley Hall near Charleston, South Carolina. The Carolina Art Association Gibbes Museum of Art, Charleston, South Carolina. The 2nd Royal Governor William Bull inherited Ashley Hall in 1755. A medical doctor, he never wavered in his loyalty to his King. He left with the British in 1782, dying in London 9 years later. His will states: “I William Bull the late Governour of South Carolina for his Britanic Majestiy do …my worldly goods greatly deranged & lessened in value not by my Fault but by some unexpected contingencies I have met from peculiar situations wherein I have been placed during the late unhappy times in America…my plantation on Ashley River in Carolina where my Grandfather lived died & lies buried where my Father & all his children were born I wish to remain in the possession of one of his Posterity I therefore give to my nephew William his heirs…”
The watercolors of Charles Fraser allow us feel the South Carolina landscape around us as we learn how it was being groomed & planted. Thanks to South Carolina native Fraser, we have a chance to see, through his eyes, the homes & gardens there as he was growing up. Although he was primarily known his miniature portraits, he also created watercolors of historical sites, homes, & landscapes. He painted while working as a lawyer, historian, writer, & politician. Today, many of Fraser's works are displayed at the Carolina Art Association & the Gibbes Art Gallery in Charleston.
at 4:00 AM