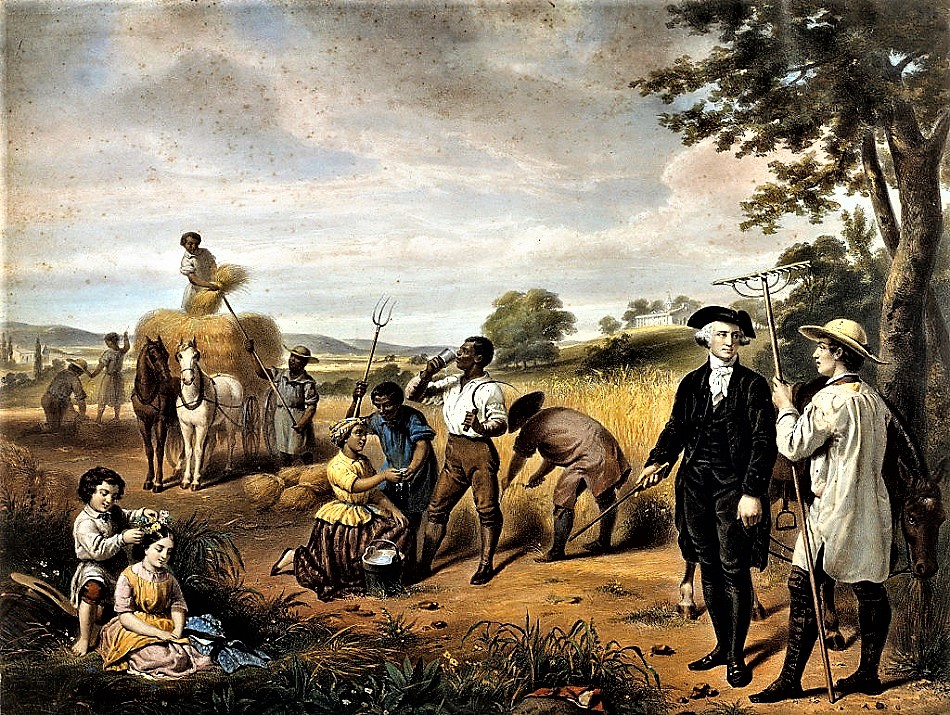 Washington took great pains to inform himself concerning any subject in which he was interested and hardly was he settled down to serious farming before he was ordering from England "the best System now extant of Agriculture." Shortly afterward he expressed a desire for a book "lately published, done by various hands, but chiefly collected from the papers of Mr. Hale. If this is known to be the best, pray send it, but not if any other is in high esteem." Another time he inquires for a small piece in octavo, "a new system of Agriculture, or a speedy way to grow rich."

Among his papers are preserved long and detailed notes laboriously taken from such works as Tull's Horse-Hoeing Husbandry, Duhamel's A Practical Treatise of Husbandry, The Farmer's Compleat Guide, Home's The Gentleman Farmer, and volumes of Young's Annals of Agriculture.

The abstracts from the Annals were taken after the Revolution and probably before he became President, for the first volume did not appear until 1784. From the handwriting it is evident that the digests of Tull's and Duhamel's books were made before the Revolution and probably about 1760. In the midst of the notes on chapter eight of the Compleat Guide there are evidences of a long hiatus in time...

Tull's Horse-Hoeing Husbandry was an epochmaking book in the history of English agriculture. It was first published in 1731 and the third edition, the one I have seen and probably the one that Washington possessed, appeared in 1751. Possibly it was the small piece in octavo, "a new system of Agriculture, or a speedy way to grow rich" concerning which he wrote to his agent. It deals with a great variety of subjects, such as of roots and leaves, of food of plants, of pasture, of plants, of weeds, of turnips, of wheat, of smut, of blight, of St. Foin, of lucerne, of ridges, of plows, of drill boxes, but its one great thesis was the careful cultivation by plowing of such annuals as potatoes, turnips, and wheat, crops which hitherto had been tended by hand or left to fight their battle unaided after having once been planted.

Duhamel's book was the work of a Frenchman whose last name was Monceau. It was based in part upon Tull's book, but contained many reflections suggested by French experience as well as some additions made by the English translator. The English translation appeared in 1759, the year of Washington's marriage. It dealt with almost every aspect of agriculture and stock raising, advocated horsehoeing, had much to say in favor of turnips, lucerne, clover and such crops, and contained plates and descriptions of various plows, drills and other kinds of implements. It also contained a detailed table of weather observations for a considerable time, which may have given Washington the idea of keeping his meteorological records.

Young's Annals was an elaborate agricultural periodical not unlike in some respects publications of this sort to-day except for its lack of advertising. It contains records of a great variety of experiments in. both agriculture and stock raising, pictures and descriptions of plows, machines for rooting up trees, and other implements and machines, plans for the rotation of crops, and articles and essays by experimental farmers of the day. Among its contributors were men of much eminence, and we come upon articles by Mr. William Pitt on storing turnips, Mr. William Pitt on deep plowing; George III himself contributed under the pen name of "Ralph Robinson."

As one looks over these publications he realizes that the scientific farmers of that day were discussing many problems and subjects that still interest those of the present. The language is occasionally quaint, but the principles set down are less often wrong than might be supposed. To be sure, Tull denied that different plants require different sorts of food and, notes Washington, "gives many unanswerable Reasons to prove it," but he combats the notion that the soil ever causes wheat to degenerate into rye. This he declares "as ridiculous as it would be to say that an horse by feeding in a certain pasture will degenerate into a Bull."
at 4:00 AM