Work Yards -Timber and Wood Yards
The term timber yard usually referred to a commercial enterprise selling wood, while wood yard usually was a place for gathering and holding wood at a private dwelling. 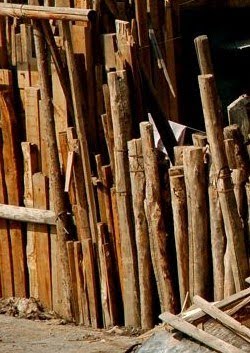 In 1736, the South Carolina Gazette advertised a commercial Charleston "Timber-Yard...where any Person may be supplied with all sorts of Boards, Scantling, Laths, Cedar Posts for Gardens, and Frames for Houses."

An edition of the 1740 South Carolina Gazette also advertised a private wood yard, "A House joining the Crown-Inn, with 6 Rooms, a Kitchen, Store Room, Garden and Wood Yard."

The 1761 Maryland Gazette in Baltimore, Maryland, advertised, "To be sold...a good Dwelling-House 80 Feet in Length...Garden...Wood-Yard, Etc." 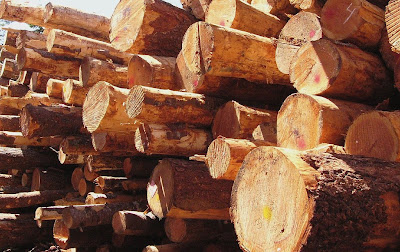 Some business ventures required wood for fuel. The Pennsylvania Gazette noted in 1768, "a DWELLING HOUSE and BAKEHOUSE, very convenient for Loaf Bread or Sea Biscuit; with a large Wood yard, Stable and Garden, and a Pump at the Door."

Work Yards -Brick Yard
Near Charleston, South Carolina, a brick yard was advertised for sale in 1748, "at the landing a good brick-yard... and a good Brick Cafe for burning them, about 45 Feet in Length near 20 in Breadth, and 9 in Height, with 12 Arches, and a Division in the Middle, a large Quantity of Wood near at Hand... a Number of Slaves, among whom are... Brick Moulders."

The 1764 Pennsylvania Gazette advertised for, "Able bodied Negroe Men and Boys, to work at a Brick yard."

In 1786 Alexandria, Virginia a newspaper noted a commercial, "Brick-Yard about a mile from the Court House; it has a case or wall built for burning bricks."

In the 18C, bleaching clothing was done as it had been for centuries. Shakespeare’s jokester, Autolycus, in The Winter’s Tale loves to see a “white shirt bleaching on the hedge.” In his 1745 Directions to Servants, Jonathan Swift suggests that “the place for hanging” laundry “is on young Fruit Trees, especially in Blossom; the Linnen cannot be torn, and the Trees give them a fine Smell.” 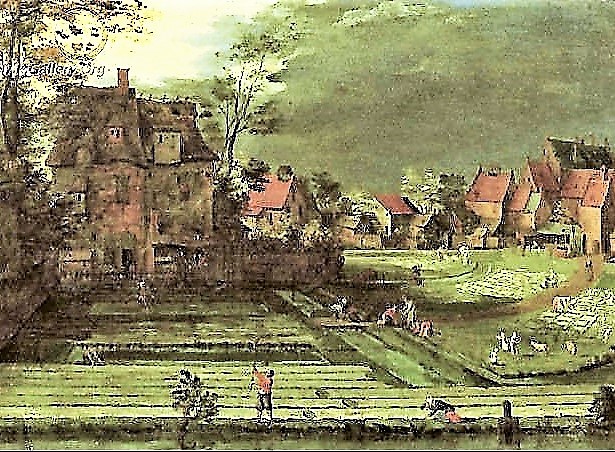 Pieter Gysels (1621-1691) A town with figures working in bleaching fields in the foreground
To bleach household & personal linen was spread on the grass, hedges, bushes, or on poles; soaked with buckets of lye at intervals; and eventually rinsed & dried. The lye was obtained by placing wood ashes in a barrel & pouring water over the ashes, until a brownish liquid oozed out the bottom of the barrel.

There were variations, such as using plain water & no lye. The bleaching process could last 3 days or longer, depending on available sunlight; and it took up valuable space. Bleach yards were sometimes called bleaching greens. Sometimes high-quality linen that was dried on grass yards was called lawn. 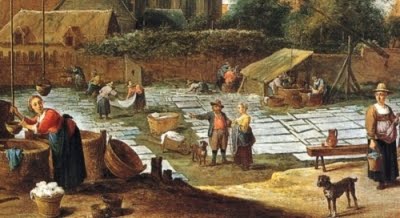 David Teniers the Younger (1610-1690) The Bleaching Ground
Because both bleaching & drying were outdoor activities, it was good to have an enlosed, grassy yard for these chores. As one 19th century housewife noted one needed a, "grassy corner well open to the sun,...sheltered from high winds...the attentions of wandering poultry... and the incursions of pigs, puppies and calves...they not only soil the clothes, but will tear and even eat them"

A Philadelphia newspaper in 1740, noted a public yard set aside for bleaching as a business enterprise, "Customers of James Rogers' bleach-yard are requested to leave cloth at the Three Tuns Tavern in Philadelphia."

In the spring of 1772, the Philadelphia "Managers of the House of Employment... prepared a piece of ground...suitable for a bleach yard, and provided utensils necessary for the bleaching and finishing of linen in a compleat manner."

The Pennsylvania Gazette advertised for sale in April of 1774. "18 acres... about 2 miles and an half from the Courthouse ...adjoining lands of Robert Morris, Joseph Shippen ...there has been a bleach yard on the lot, some of the bleaching utensils still remain, which will be sold at the same time."

The Pennsylvania Packet advertised "a piece of land to be sold in the summer of 1778 in Germantown near Philadelphia containing 24 acres, whereon is a compleat bleach yard wash mill, and other conveniencies for carrying on the bleaching business." 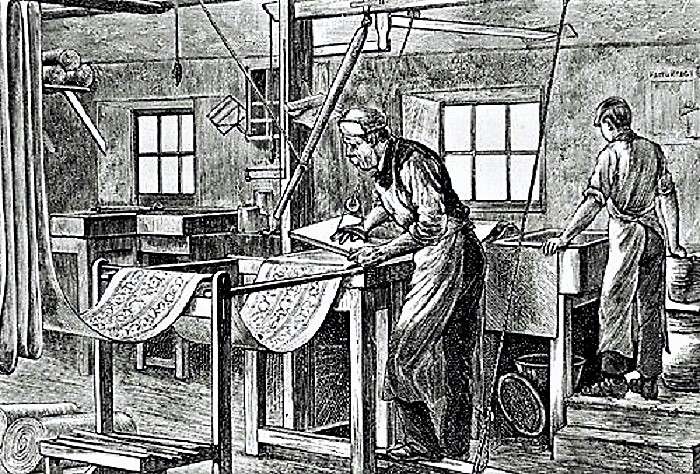 Calico Block Printing by Hand
By July of 1774, Philadelphia had a new enterpise, "A CALICOE PRINTING MANUFACTORY, and BLEACH YARD , is just opened...JOHN HEWSON...begs leave to inform the public... Linen sent for bleaching, from one yard to a thousand, shall be punctually returned in three weeks, compleatly finished, at 4d. per yard." 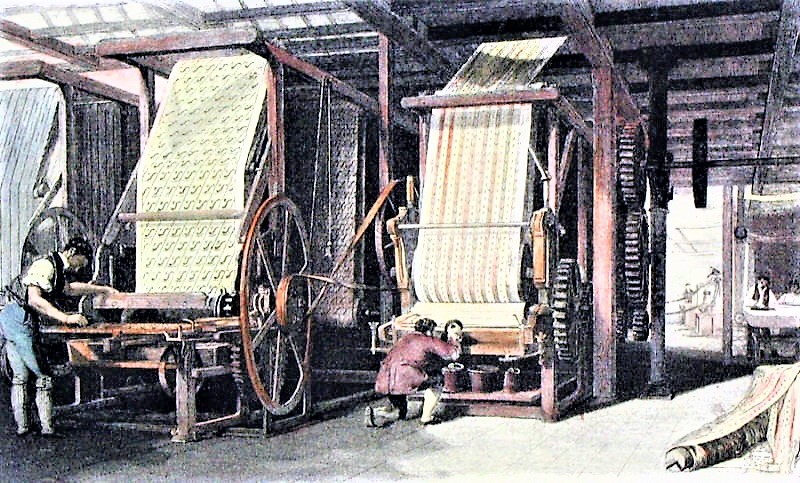 Calico Block Printing by Machine
John Hewson (1744-1821), the first well-documented textile printer in America, arrived from London in September 1773 at the invitation of Benjamin Franklin. Trained to produce the highest quality block-printed textiles at Bromley Hall in London, Hewson set up his "Calicoe Printing Manufactory" in Philadelphia. 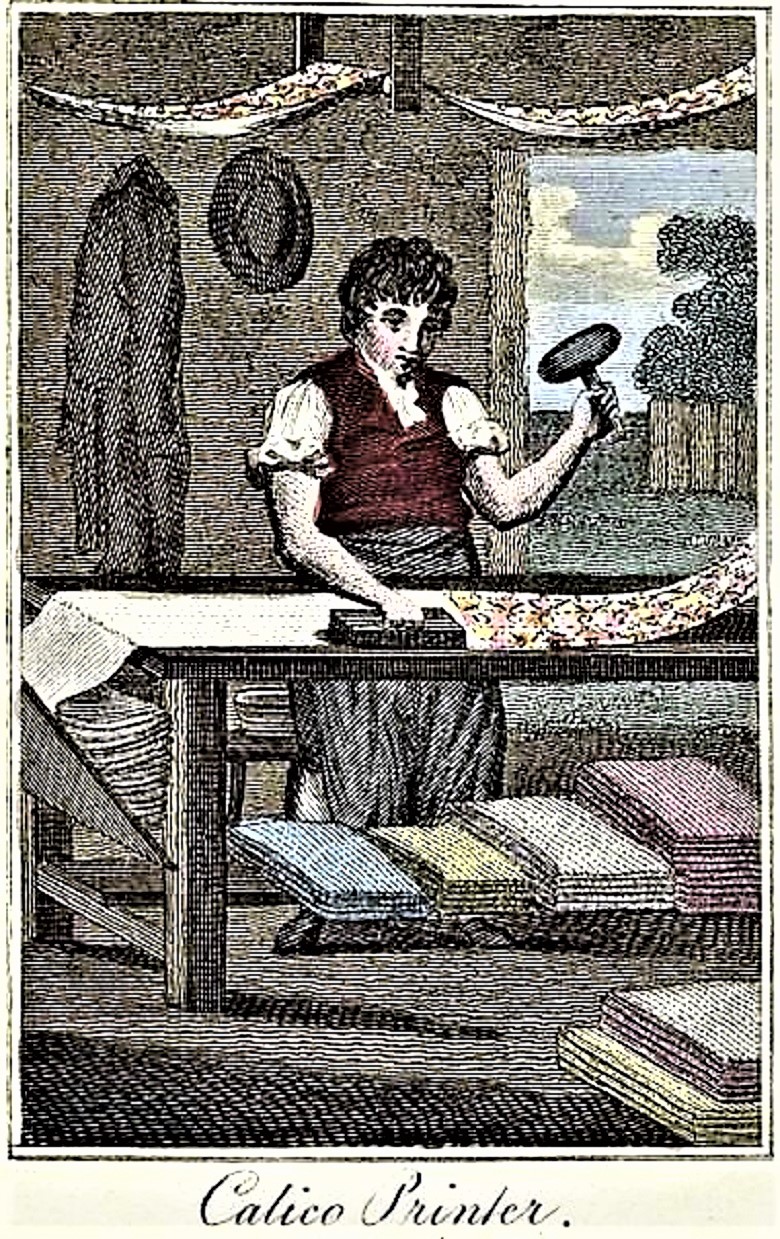 Apparently, the bleach & calico printing industries, which seemed to be flourishing in Philadelphia, had dwindled by 1788, when the report of The American Cotton Manufactory to the Board of Managers of the Pennsylvania Society for promoting Manufactures and the Useful Arts noted, "it may be observed...the want of proper bleach yards, and the difficulty of procuring persons well skilled in bleaching."
at 4:00 AM