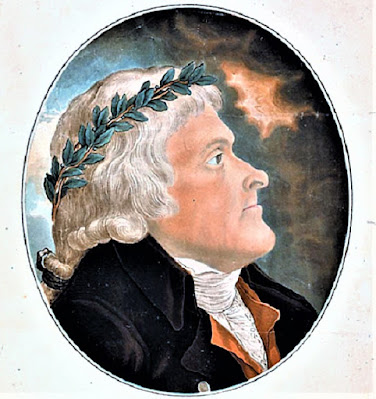 Although Thomas Jefferson often participated in the gardening process himself -sowing seed in the kitchen garden, and labeling and spacing tulip bulbs in the flower beds - he was not the only gardener at Monticello. His daughters, Martha and Maria, and his granddaughters, Ellen and Anne, planted bulbs in the flower borders and sowed cabbage seed in the kitchen garden. Wormley Hughes, the African American often called Monticello's "Head Gardener," collected seed, planted precious plants in the Monticello nurseries, and set out Mr. Jefferson's "pet trees." Gardener John espaliered grapes, aided in the terracing of the kitchen garden, and planted a sugar maple tree that survived for 200 years, while Great George and Goliah led the "veteran aids" in the daily work in the vegetable garden. Itinerant European gardeners like Robert Bailey and Anthony Giannini were employed to care for the orchards and vineyards. But just as Jefferson was not the only gardener, so were the mountaintop flower, fruit, and vegetable gardens not the only gardens at Monticello.

Jefferson's Memorandum Books, which detailed virtually every financial transaction that he engaged in between 1769 and 1826, as well as the account ledger kept by his granddaughter, Anne Cary Randolph, between 1805 and 1808, document hundreds of transactions involving the purchase of produce from Monticello slaves. This documentary record of the purchase of 22 species of fruits and vegetables from as many as 43 different individuals, suggests the vitality and entrepreneurial spirit of the Monticello African American community and the beginnings of an African American horticultural tradition.

Monticello's 1,000-foot-long kitchen garden is legendary for the variety and scope of its vegetable production, so the question immediately arises, "why did the Jefferson family require outside sources to provide for the table?" One explanation might lie in the experimental focus of the Jefferson garden. Although over 300 vegetable varieties were documented, the emphasis was on using the garden as a laboratory rather than on production for the dinner table. As well, much of the produce purchased from Monticello slaves was out of season: potatoes were sold in December and February, hominy beans and apples purchased in April, and cucumbers bought in January. Archaeological excavations of slave cabins at Monticello indicate the widespread presence of root cellars, which not only served as secret hiding places, but surely as repositories for root crops and other vegetables amenable to cool, dark storage. Conversely, inventories of the Monticello cellars curiously omit garden produce, and are dominated by fancy, imported delicacies like capers, olive oil, and Parmesan cheese. Produce harvested from slave gardens at Monticello seemed to be more purposefully directed toward the out-of-season table, and they included more everyday garden staples, like cabbages and potatoes, rather than the new and unusual gourmet vegetables, like artichokes and sea kale, found in the Jefferson garden.

William Hugh Grove in 1732 mentioned "little Platts for potatoes peas and cymlins, which they do on Sundays or at night."

John Custis of Williamsburg noted how in 1737 one of his slaves grew "a multitude of melons," and Philip Fithian, Princeton educated tutor for the Carter family at Nomini Hall, observed slaves digging up "their small Lots of ground allw'd by their Masters for Potatoes, peas, etc."

...Joseph Fossett, an enslaved Monticello blacksmith, purchased a gold watch, tutoring, and a copy book for his son, Peter, perhaps from income generated from this underground economy. According to Genovese the gardens were important in providing a sense of independence, and they also enabled African Americans to learn the art of economic bartering. At Monticello, Anne Cary, between the age of 14 and 17, purchased vegetables from over 40 slaves, and one can only speculate about the bartering process. At this meeting of white and black worlds, with Ann hoping to pass the rites of adulthood and elderly slaves like Squire aspiring for some marginal self-sufficiency, one wonders which party had the advantage: which party drove the hard bargain?

A debate waged among southern plantation owners about the desirability of these gardens. Some argued they encouraged domestic tranquility and tied slaves more securely to the land. Others felt the gardens, and the independence they encouraged, led to discontent and distracted slaves from labor in the fields. Questions inevitably arose about what crops were whose, master's or slave's? Anthony Giannini wrote Jefferson in Paris and complained of slaves stealing Monticello grapes before they ripened, and at Poplar Forest, Jefferson's retreat home near Lynchburg, John Hemmings, a loyal and skilled African American carpenter, reported to Jefferson that a disgruntled slave, Nace, had stolen all the produce from the kitchen garden. The enormous, 10-foot-high paling fence that surrounded the Monticello fruit and vegetable garden may have been constructed to prevent thievery. Jefferson wrote his son-in-law, Thomas Mann Randolph, in 1792, and thanked him for banning the cultivation of tobacco around slave dwellings. He wrote, "I have ever found it necessary to confine them [slaves] to such articles as are not raised on the farm, there is no other way of drawing a line between what is theirs & mine."

Both Jefferson and Ann Cary specified the person from whom they purchased vegetables and fruit; however, the person involved in the sale might not have been the one gardening. Thirty-one males, averaging about 37 years of age, and twelve females, averaging 41 years old, were involved in the transactions. Since many of the sellers were older, seven of the males were over fifty, they may have been representing the family garden. Squire, for example, a former Peter Jefferson slave leased by Thomas Jefferson from his mother, represented the most sophisticated garden. He sold thirteen different commodities, including cymlins (a patty-pan-shaped squash), potatoes, lettuce, beets, watermelons, apples, and muskmelons. He sold a cucumber to Jefferson on January 12, 1773, suggesting either that the fruit was pickled and preserved, or that artificial heat in a cold frame or hot bed was used to bring this tender vegetable to fruition in the middle of winter, a rather remarkable feat in 18th-century Virginia. Bagwell, Squire's son-in-law, was also a major supplier, and sold Jefferson sixty pounds of hops for twenty dollars. A woody perennial, hops require an arbor or structure upon which to vine, and most importantly, suggest the permanence that perennial crops lend to a garden.

Israel Gillette Jefferson, a waiter and carder in the Monticello cloth factory, represented another productive African American family garden. His father, Edward Gilette, sold watermelons, beans, and potatoes, while Israel sold large quantities of cabbage, fifty to one hundred at a time. Caesar, a farm laborer at Shadwell, Jefferson's birthplace and a satellite farm to Monticello, was another major supplier of cucumbers, cabbages, and greens, and Burwell Colbert, probably Jefferson's most valued and trusted slave, sold "sprouts" to Jefferson. Boys and girls were also involved in the bartering process; Billy, at the age of eight, sold strawberries, perhaps collected from the wild, while Madison and Eston Hemings, most likely Jefferson's sons by Sally Hemings, were 15 and 18 when selling 100 cabbages to Jefferson in 1822.

Except for watermelons, and perhaps sweet potatoes, few of the sold fruits and vegetables were either African in origin, or closely associated with African American food culture. Cucumbers were the most common commodity, with 23 transactions, followed by cabbages, watermelons, hops, Irish potatoes, cymlins, and greens. One wonders if Monticello's slave gardens included other crops specifically identified with African Americans. Jefferson discussed the potato pumpkin, evidently an early bearing squash used as a sweet potato substitute, that was "well esteemed at our tables, and particularly valued by our Negroes." He also attributed the introduction of sesame to the slave trade, and acknowledged an independent African horticultural tradition associated with the culture and use of this plant. Other vegetables grown by Jefferson and associated with African American culture include okra, used liberally around Charleston and New Orleans; eggplant, an African native; sweet potatoes, "which the Negroes tend so generally;" peanuts, often associated with the African groundnut; and the West Indian gherkin, a spiny, round cucumber commonly pickled and grown in the Jefferson kitchen garden. Some historians have also attributed the earliest distribution of tomatoes in the deep South to African introductions.

Monticello was a 5,000-acre plantation organized into a series of four or five satellite farms, and the African American gardens were likely associated with quarter farm communities or isolated cabins out on the farm. Neither documentary nor archaeological evidence has illuminated the character of these gardens. One exception was an intriguing reference, three years after Jefferson's death, to the distribution of peach pits to slaves at Edgehill, a Jefferson family estate adjacent to Monticello, "and thus in a few years there will be two or three trees about every cabin." Traveler's landscape commentaries in the 18th and early 19th centuries often used the term "plats" to identify the slave gardens, an interesting contrast to the word used to describe how white Virginian gardens were organized: into "squares."

Frederick Law Olmsted, often referred to as America's first landscape architect, described African American gardens in 1860 as about a half acre in size. Work in these gardens took place on Sundays, or in the night after slaves were excused from their field labor. An oral tradition suggests that the evening garden work was illuminated by lighting the animal fat in cast iron pots or pans.

All this research & images & much more is directly from the Monticello website - to begin exploring, just go to Monticello.org.
at 4:00 AM