In 1740, Nathaniel Merserve (1705-1758) built his dwelling on the tidal North Mill Pond near his shipyard in Portsmouth, New Hampshire. He was the owner of the largest shipyard in Portsmouth, by then famous for its shipbuilding facilities. His home was contiguous to his shipyard; where he constructed a 50 gun frigate in 1749, for the Royal Navy called The America.  In the capture of Louisburg from the French in 1745, he was Lieutenant Colonel of the regiment which New Hampshire raised for the expedition; & in 1758, he sailed for the 2nd siege of the place with 168 carpenters. Soon after their arrival at Cape Breton, "his whole party, except sixteen, were seized with smallpox, of which disorder Colonel Meserve & his eldest son died." (1913 Harold Hotchkiss Bennett) 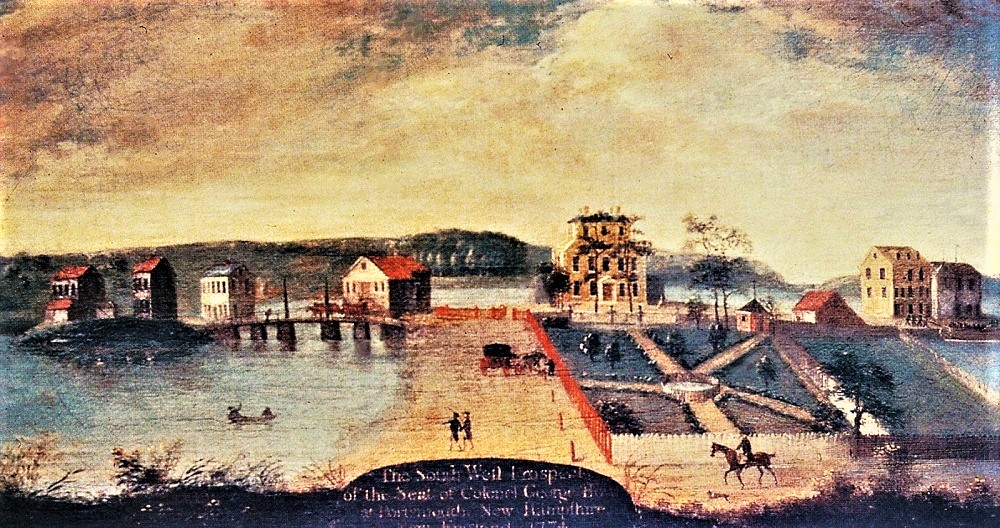 1774 The South West Prospect of the Seat of Colonel George Boyd of Portsmouth, New Hampshire

In 1763, the house was purchased by Peter Livius (1739-1795), son of a Hamburg German employed in an English factory at Lisbon. His British mother sent him to school in England where, in 1758, he married the daughter of wealthy Colonel John Tufton Mason.  In 1763, the newly rich Livius moved from England to New Hampshire, where his wife’s family had large land claims. He immediately established a lavish style in Portsmouth, showing a remarkable ability to generate personal animosities.  He attempted to buy his credentials in New England colonial society by a large gift of books to Harvard College in 1764, from which he did receive an honorary degree 3 years later. In September 1765, his wife's English connections put him on the council of New Hampshire; & in 1768, he became justice of the Inferior Court of Common Pleas. He was accused of partiality as a judge, even of counseling litigants who were to appear before him. Governor Benning Wentworth, with whom he had earlier quarrelled over land grants, even alleged that Livis had been “a principal Abettor in the Disturbances at the Time of the Stamp Act.” In 1772, Wentworth removed Livius from the bench.  The irate Livius returned to London.

Col. George Boyd,  one of Portsmouth’s wealthiest merchants before the Revolution, "purchased ... the mansion & ship-yard, of Peter Livius...He enlarged the house, materially. His garden in front extended to the site of the present depot...& water bounded his premises on the east. It was a magnificent seat, such as a nabob might envy, enclosed within a white open fence, & at regular intervals of some forty or fifty feet, those handsomely carved towering Grenadier's heads were placed on posts, & presented a very unique appearance...His gardener, John Cunningham, (who died a few years since, at the age of ninety-four) he also sent over from England, at an earlier date." (1859 Charles Warren Brewster) 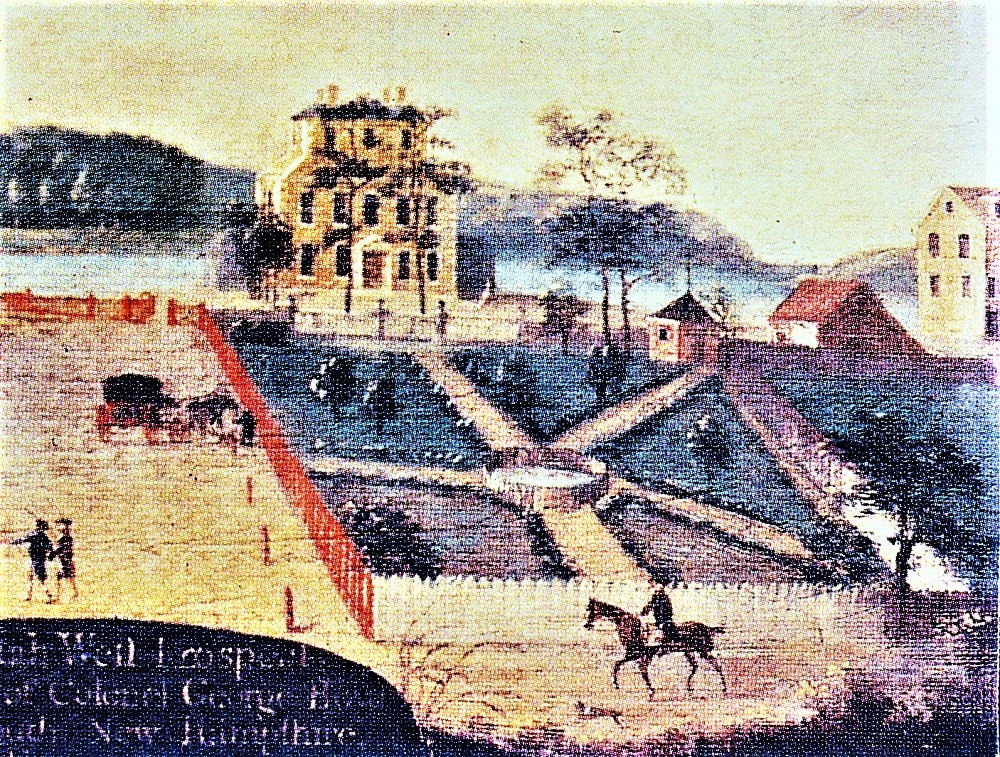 1774 The South West Prospect of the Seat of Colonel George Boyd of Portsmouth, New Hampshire Detail

Boyd's garden is somewhat of a curiousity, even beyond the Grenadier's heads on the fence posts.  Boyd fenced his newly enlarged pleasure grounds with white fences painted red on the side near the road, which was popular in New England a that time.  The garden had a traditional central walkway leading out from the main door of the house, but here the plan diverged from the conventional.  In the middle of the garden, Boyd placed a basin, perhaps to contain fresh water, rather than salt water, for his garden, or perhaps as a home to fish.  He had probably seen such basons on his trips to England to purchase goods.  He built 5 walkways, not the usual 4, radiating from his bason in an irregular pattern, & along only one side he dug a canal, the length of the garden.  From the many buildings of one color which he erected, his estate became known as the "White Village."

Much to the consternation of the local patriotic officials, "during the Revolution, Colonel Boyd found it convenient to live in England, but upon the conclusion of peace, decided to return, bringing a new & handsome coach, an English coachman ... & an elegant monument for his grave at some future time. He found an earlier use for this possession than he anticipated, for two days before the arrival of the ship, on October 8, 1787, he died, and took his place in the North Cemetery instead of in his magnificent mansion with it's spacious garden." (1913 Harold Hotchkiss Bennett)
1774 The Estate of Col. Nathaniel Meserve 1705-1758 Portsmouth, NH 1740 Portsmouth Times, 18 October 1924

In the year 1832, George Raynes (1799-1855) bought the estate, & the family maintained a shipyard there until 1865, building between 60 & 70 vessels.  After George Raynes' death, the family entered a lawsuit contesting the will & the ownership of the business, which lasted for years.  The mansion on the south shore of the North Mill Pond, was demolished in 1938.  Rather amazingly, a depiction of the house & garden remains from a Portsmouth newspaper article published in 1924.