From Garden to Table - The poor, forgotten quince...

In Praise of the Misunderstood Quince
By Michael Tortorello New York Times. Published: May 2, 2012 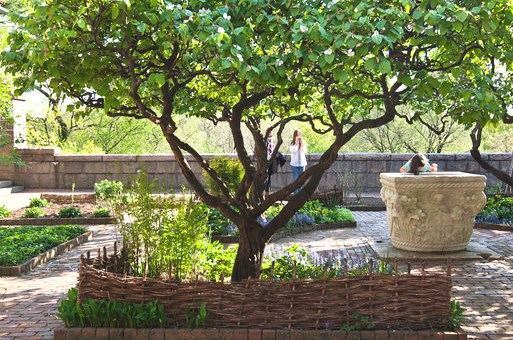 After half a century in public life, the most famous quince trees in New York are looking — let’s say mature. Or how about distinguished? No need to beat around the bush, said Deirdre Larkin, the horticulturist who tends the four beloved quinces at the Cloisters Museum and Gardens, along the Hudson River in Fort Tryon Park.  “They are old, and nothing will change that,” she said.  Yet in Europe, where the quince’s yellow pome is a culinary treasure, orchardists will buttress the sagging limbs with a crutch...But, Ms. Larkin said, “trees can live for hundreds of years.” ...

What most Americans know about quince (Cydonia oblonga) — if they know about quince at all — is that it was once a fixture in Grandma’s garden. O.K., Great-Great-Grandma’s garden. As long ago as 1922, the great New York pomologist U. P. Hedrick rued that “the quince, the ‘golden apple’ of the ancients, once dedicated to deities, and looked upon as the emblem of love and happiness, for centuries the favorite pome, is now neglected and the least esteemed of commonly cultivated tree-fruits.” Almost every Colonial kitchen garden had a quince tree. But there was seldom need for two, said Joseph Postman, the United States Department of Agriculture scientist who curates the quince collection in Corvallis, Ore. Settlers valued quince, above all, as a mother lode of pectin for making preserves. And for that task, a little fruit went a long way.

“If you put the seeds in a cup of water, it becomes almost like Jell-O,” Mr. Postman said. This goo doubled as a pomade...Like so many American workers, the quince lost its job to a disruptive technology: powdered gelatin, introduced by Charles Knox in the 1890s...Today the nation’s entire quince crop covers a paltry 250 acres ... By contrast, farmers this year will raise some 350,000 acres of apples and 96 million acres of corn. 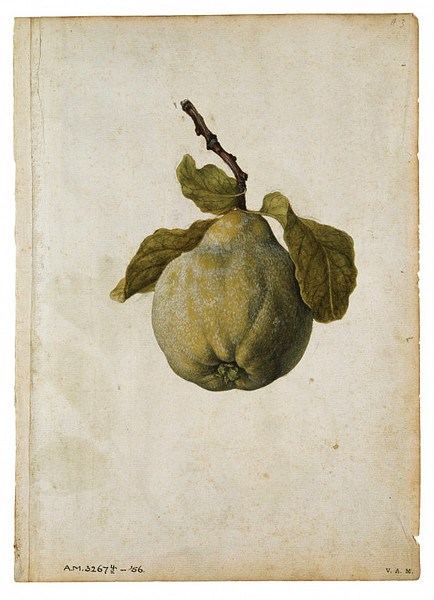 So we arrive, perforce, at a fundamental question: Is raw quince edible? ... The skin, fuzzy at first, has an objectionable texture,...And when the flavor is not sour, it’s sour and astringent...The key to enjoying quince at home, apparently, is to cook it and cook it and cook it. At that point, the quince is ready to cook...

The quince tree is self-pollinating: you need only one. If you train the growth to a few trunks, a quince shouldn’t get much taller than a gardener can reach with a six-foot ladder.

By now, Mr. Postman has probably grown more varieties of quince than anyone else on the continent. The Corvallis germ-plasm repository contains 50 or 60 edible varieties, and provides material to researchers and plant breeders...When I spoke to Mr. Postman, in fact, the couple was driving across Arizona with a fresh quince cutting in the back seat. Mr. Postman had just stopped at the historic Mission San José de Tumacácori, about 20 miles north of the Mexican border. Researchers there have been replanting the neglected orchard with the forgotten fruit varieties of 17th-century Jesuit missionaries...

A bushel of good quince will fetch $2.50 at farmers’ markets in New Jersey. At least it did in the late 19th century, when the Rev. William W. Meech published Quince Culture, in 1825.  It is the definitive — and possibly the only — guide to cultivating the fruit.  You can read the updated 1888 version here.  or the original 1825 edition here ... 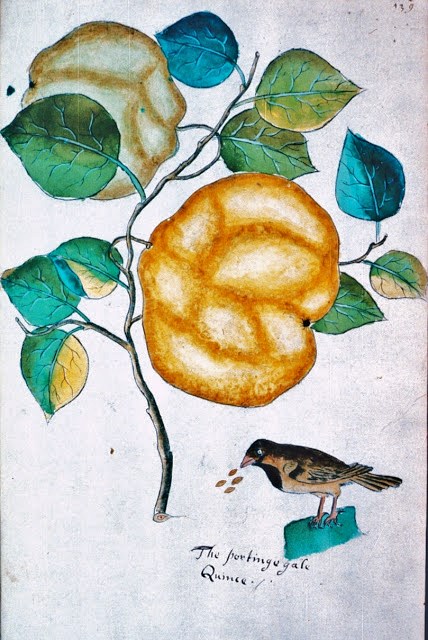 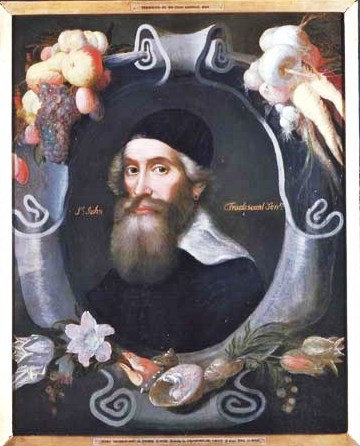 The homeland of the quince lies between the Caspian Sea & the Black Sea, a mountainous region called the Caucasus that touches northern Turkey & Iran as well as Southern Georgia.

Mention of quince appears in Greek writings about 600 BCE as a ritual item in wedding ceremonies. Pliny mentioned the Mulvian variety, a cultivated quince, as the only one that could be eaten raw. Columella described three other varieties he names as the sparrow apple, golden apple, & the must apple.

Cultivation of the quince began in Mesopotamia, an area now Northern Iraq between the Tigris & Euphrates Rivers. Between 200 & 100 BCE, this "golden apple" was cultivated by the Greeks. The quince was cultivated prior to the apple & reached Palestine by 100 BCE.

Following the battles for power between the Arabs & the Byzantines circa 763 CE, the some Arabs traveled to Isfahan in Persia for quinces, apples, saffron, & salt.

Charlemagne was partly responsible for introducing the quince into France with his orders in the year 812 to plant quince trees in the royal garden.


Chaucer mentions quince using the name coines, a word that comes from the French coing.
O mosy quince, hangyng by your stalke,
The whyche no man dar pluk away ner take,
Of all the folk that passe forby or walke,
Your flowres fresshe be fallyn away and shake.
I am ryght sory, masteras, for your sake,
Ye seme a thyng that all men have forgotyn;
Ye be so rype ye wex almost rotyn.

When European & Near Eastern immigrants began to settle in the New World, they planted quince in North America.

Quince enjoyed the spotlight only briefly during the colonial period in New England. A March 16, 1629 entry in the Massachusetts Bay Colony's Memorandum listed quince as one of the seeds requested from England.

By 1720, quince was thriving in Virginia. Many home gardens throughout the colonies were reaping a fall harvest from their quince trees; however, apples quickly snatched the spotlight from the quinces. Americans had become accustomed to sweet fruits like the apple & found little about the quince to favor.
Quince cheese, an old New England specialty of the 1700's, required all-day boiling of quince preserves to achieve a solidified state, probably similar to the French specialty cotignac.
Quince grew traveling legs as the westward movement took hold in the United States. In the 1850's a Texan, who owned a large land grant, grew many fruit trees on his property. Among them was quince, along with peach, fig, raspberry, pomegranate, & plum.

Aphrodite, the Greek goddess of love, was known to consider apples sacred. Historians believe the apple favored by Aphdrodite were really quince. The legendary golden apple of Hesperides that Paris gave to Aphrodite was really a quince.

The ancient Greeks considered quinces to be the symbol of fertility & dedicated them to the goddess of love.

An Athenian wedding tradition of the ancient Greeks had friends & family tossing quinces into the bridal chariot as the groom was escorting his bride to her new home. Once they arrived, the bride ate a ceremonial cake flavored with honey & sesame. To insure fertility, she was then presented a quince.

One myth says that pregnant women who indulge their appetites in generous quantities of quinces will give birth to industrious & highly intelligent children.

The earliest true preserves came about during classical times when quinces were cooked with honey & vinegar, a combination that produced a gel or pectin-like quality.

From the15th century to the present, Cotignac d'Orleans, a clear gel made from boiled quince juice & sugar, is set into small wooden boxes to form confections. These treats were originally presented to French royalty in honor of their visit to cities & outlying villages.

When Joan of Arc arrived in Orleans in 1429, to liberate the French from the English, she received the honored gift of cotignac.

The English, during the 16th & 17th centuries, delighted in preparing many variations of quince preserves which they called quidoniac, quiddony, marmelade or paste of Genoa. The preserves formed a thick paste that could be shaped into animals or flower forms. Though the quince paste is rarely found in England today, a coarse version, called membrillo, is a favorite treat presently served along with cheese in Spain.

In 1570, Pope Pius V gave a spectacular banquet that featured as its piece de resistance, a quince pastry that required "one quince per pastry."

In Britain, quince was incorporated into the cuisine in various pies & tarts. The British also prepared a sauce made from quince that became a traditional accompaniment to roasted partridge.

Although the most favored quince marmalade, called marmelada, originated Portugal during the 1500's, the British were preparing many versions of marmalade from quince well into the 1600's.

For even more on quince, see Vegetrians in Paradise