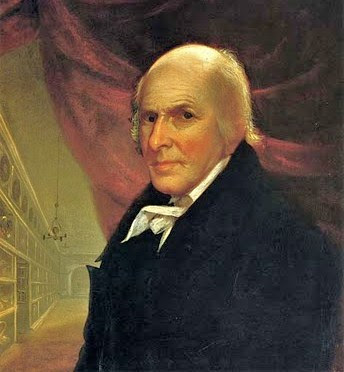 Charles Wilson Peale, besides being classed as a painter and patriot, was also a naturalist, founder of a famous museum, and writer. Besides his memoirs, and some other unpublished writings, he was the author of such works as "An Essay On Building Wooden Bridges," "Discourse Introductory To A Course of Lectures on the Science of Nature," "Introduction to a Course of Lectures on Natural History," "An Epistle to a Friend on the Means of Preserving Health," and "An Address to the Corporation and Citizens of Philadelphia."

After the Revolutionary War, during a period when economic conditions seemed rather unfavorable to the artist's profession, Peale came across the fact that the bones of a mammoth had been discovered in New York State. Friends suggested to Peale that he make his art gallery a repository also of natural curiosities. The idea appealed to him and such an arrangement was established. At one time the museum was even granted free use of the State House (Independence Hall) which, a short time before, had been vacated by the legislature. Later it became incorporated as the Philadelphia Museum. In its time this museum in scope and character was of the first rank.

Davy Crockett in 1834, during his travels to eastern cities, wrote, "... I was taken to Peale's museum. I shall not attempt to describe the curiosities here; it is above my bend. I could not help, however, thinking what pleasure of curiosity folks could take in sticking up whole rows of little bugs, and such like varmints, I saw a boy there that had been born without any arms or hands; and he took a pair of scissors in his toes, and cut his name in full, and gave it to me. This I call a miracle."

Mrs. Anne Royall, who was born in Maryland, paid a visit to the museum in the 1820's while in Philadelphia. "It may readily be supposed," she wrote, "that the idea of seeing a place so celebrated as the museum of Philadelphia, inspired me with no common curiosity: that, and the market to me, were objects of the first interest, which I had long and ardently wished to see. The museum is in Chestnut St., near the corner of S. 4th St. I soon discovered it by a sign, and after crossing a gallery, came to a staircase, wide enough to admit a wagon and team. I made but a few steps, before one of them springing under my fee, rung a bell to my great surprise, and upon gaining the stairs, I was met by a man whose business it is to receive the money paid, which is 25 cents. The first object of my inquiry was the mammoth skeleton, but I was greatly disappointed in its appearance. The skeleton is indeed large as is represented, but it had not that formidable, dread-inspiring aspect which my romantic turn led me to expect and with which I expected to be overwhelmed: I beheld it without surprise or emotion. It is standing upon its feet in a small room, which is lighted by a large window, enclosed with a rail as high as one's breast, and presenting its side foremost. The whole has a very dark appearance, and in many parts it is quite black. In some instances the bone is as hard as iron, while other parts seem to be in a moulding condition ... Although I was not thrown into hysterics at the sight of the mammoth skeleton, I found enough of the marvelous in the museum to remunerate for the disappointment. Amongst these were the sea-lion, the skeleton of a horse, which when living, measured 20 hands in height, with a human figure on its back'. A sheep weighing 214 lbs., the devil-fish - in short, ten thousand things wonderful and pleasing, including 200 portraits of our most distinguished men. Of all the portraits, I was particularly struck with those of Commodore Perry, Doctor Rush, Latrobe, and Albert Gallatin."

The museum was founded by Mr. Peale in 1784; this indefatigable man has done more since that time, than one would suppose could be done by a whole nation - the collection is endless ... After paying once, you have free liberty of the museum as often as you choose to call."

Despite the shortcomings expressed by such travelers as Davy Crockett and Mrs. Anne Royall, the educational aspect of the museum was developed for Peale's staff included professional men in zoology, comparative anatomy and mineralogy. In exhibiting his wild life he added a semblance of natural habitat, an interesting innovation. His museum became so famous that it tended to obscure his career as a portrait painter.

Although Peale more or less retired in the 1790's he continued to do some painting to enlarge his portrait gallery and to acquire the money for the museum, which depended mainly on his purse. After 1810, when he retired to his country home, his sons, who were trained naturalists, relieved him of the active supervision of the museum.

Some of the famous sons of Charles Wilson Peale by his first wife were Raphael and Rembrandt, painters, and Titian and Rubens, naturalists. Two sons of the second marriage, Franklin and Titian Ramsay (named after his half-brother who died during a yellow fever epidemic in 1789) were trained naturalists. 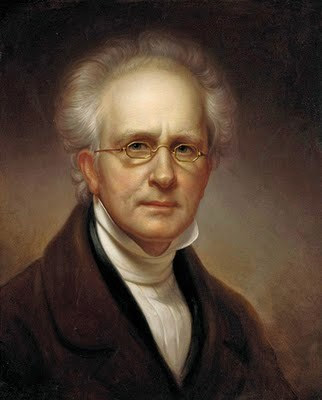 Rembrandt Peale (1778-1860) like his father, was a famous portrait painter, who also had the opportunity of studying under Benjamin West in England. Although he produced numerous portraits and historical works, he had the misfortune to live at a time when America was not demonstrating much artistic interest. Horace Wells Sellers says, "Technically, Rembrandt Peale may have been a better painter than his father, but not one of his canvases exhibits the charm and decorative qualities of those of the elder Peale ... as a result his portraits while good likenesses, are perfunctory."

Most people of Maryland, and the United States in general, will not associate Rembrandt Peale with his paintings but with his gallery and museum in Baltimore. His father tried to discourage him from establishing such an undertaking in Baltimore but the son was determined to do so, and to found, if possible, an academy for teaching the fine arts. The building was erected, and he opened his exhibits in 1814. Paul Wilstach, in Tidewater Maryland, said, "The brothers opened the museum the same year that the streets of an American city first flamed here with 'carbureted hydrogen gas,'" and in the advertisement of the museum, Peale made a point of the fact that it, too was illuminated by "Gas Light - Without oil, Tallow, Wick or Smoke."

Rembrandt tried to maintain his museum on the same basis of his father's, but the support of the people was not sufficient and finally his brother Rubens, the naturalist, who had managed the one in Philadelphia, came to take over. 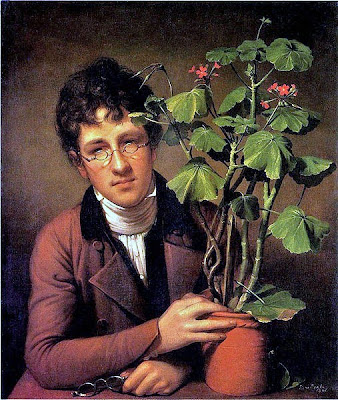 Rembrandt Peale was probably the most famous of Charles Willson Peale's sons, but Raphael (1774-1825) achieved success as a painter of miniatures and for his still-life canvases. He also painted with his brother Rembrandt; working together in the 1790's they attempted to establish a portrait gallery of distinguished persons in Baltimore.

Although Titian Ramsay (1799-1885) was somewhat of an artist, he is more famous as a naturalist and director of museums of natural history. He traveled on various expeditions painting, studying, and collecting specimens. He traveled to the coast of Georgia and Florida, the Upper Missouri River region, South America, and the South Seas. 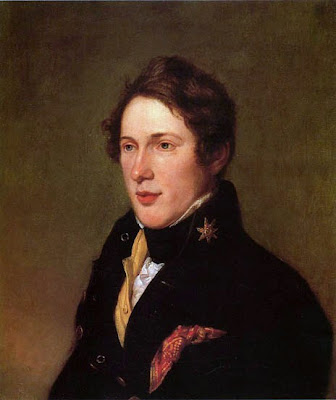 Much space has been devoted to the Charles Wilson Peale family, and rightfully so, but mention must be given to his brother and family. James Peale (1749-1831), born in Chestertown, Md., was the youngest son of Margaret and Charles Peale. He was taught not only the art of the saddler but that of the painter by his more famous brother, James, too, served in the Revolutionary War, first with Smallwood's Maryland Regiment and later with the First Maryland, in which he reached the rank of captain.

After the war he left Maryland to live with Charles in Philadelphia, where he met and married Mary Claypoole, the daughter of James Claypoole, another artist. Although he painted portraits and landscapes, he is best known as a painter of miniatures. He followed mainly the style of Charles Wilson Peale. 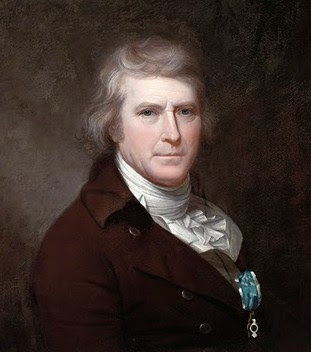 James' only son became a banker, but tow of his five daughters, Sarah Miriam and Anna Claypoole Peale became painters. Sarah Miriam became a portrait painter, most famous probably for her canvas of Lafayette in 1825, while Anna painted miniatures but not quite the equal of either her father or uncle.
.
at 4:00 AM