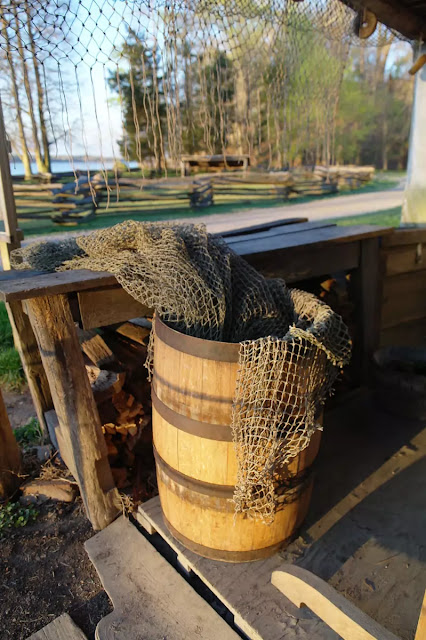 "This River…is well supplied with various kinds of fish at all Seasons of the year…the whole shore in short is one entire fishery." George Washington to Arthur Young, December 12, 1793

The three fisheries along the Potomac River reflect Washington’s entrepreneurial spirit. For almost 40 years, these fishing operations brought in food for his enslaved and paid workers, fertilizer for the soil of the gardens & cultivated fields, and selling the surplus, for additional profits.
Each spring, when fish began running past Mount Vernon's ten-mile shoreline, enslaved workers, overseers, and indentured servants dropped everything and headed to the river to haul in and process more than a million fish, in a matter of weeks.  The fish were sorted, gutted, cleaned and salted before being packed into barrels for storage and shipping. Refuse from the fish were loaded onto wagons and hauled to Washington’s gardens and fields to be worked into the soil as fertilizer. Various domestic activities, including cooking, provided for the needs of enslaved workers housed at the fisheries, as they toiled around the clock while the fish were running.

Washington wrote of Mount Vernon that the ten miles of shoreline at his estate were “one entire fishery.” The Potomac River, he boasted, was “well supplied with various kinds of fish at all seasons of the year; and in the Spring with the greatest profusion of Shad, Herring, Bass, Carp, Perch, Sturgeon &ca.”  Washington, of course, never expected the fishery to be his main source of income – he first intended to make his fortune on tobacco, and then on wheat and other grains when tobacco failed – but the river did become one of the many ways he turned the natural resources of his Mount Vernon estate into profit. Enslaved workers at the plantation caught hundreds of thousands of fish every year, especially herring and shad, which Washington sold both locally and internationally.

Washington’s development of his Potomac fisheries coincided with the downfall of Virginia’s tobacco market in the mid-eighteenth century. Tobacco required notably more labor than other crops, and Washington’s conversion to wheat in the mid-1760s resulted in a surplus of slave labor. He worked to diversify his sources of income, assigning his enslaved workers new tasks, such as spinning, weaving, blacksmithing, and fishing. The fishing venture in particular built upon Washington’s existing interests; he had grown up on the water and was certainly acquainted with the Potomac’s opportunities. Even in 1760, when Washington was still growing tobacco, he began testing the fishing grounds and wrote in his diary that he “hauled the Sein and got some fish,” seemingly by himself.

Although Washington may have used the fisheries of the Potomac on his own, and certainly enjoyed fishing for sport, large-scale fishing for economic benefit soon became work for his slaves. Washington’s enslaved workers were probably already familiar with the abundance of the Potomac – archeology has shown that they supplemented their rations considerably with wild species, both fish and game. However, their duty for Washington as fishermen was to catch impressive yields of herring and shad, some of which Washington turned around and doled out as rations, but which he also sold as near as Alexandria and as far as the West Indies.

Commercial fishing was a seasonal job, conducted when the shad and herring ran in spring from April through May. For this reason, no enslaved person at Mount Vernon was a full-time fisherman, but rather labor was drawn from around the plantation. This meant that fishing brought together enslaved workers who did not usually have contact with each other, since they generally worked and were housed with people performing similar tasks. Washington considered fishing to be especially important work, as it was one of the services for which he awarded extra rations of rum or other spirits.

To conduct commercial fishing, Washington ordered seine nets that were twelve feet in height and several hundred feet wide. Dropped in an arc by two men in a rowboat, the net formed a barrier that could trap thousands of fish, which slaves collected in baskets as teams onshore pulled the net in.

Polish traveler Julian Niemcewicz, who visited Washington in 1798, “went out with the steward Anderson and some negroes to catch fish,” and noted that while the method of fishing was similar to the one used in Europe, the fish were smaller. (By twenty-first century standards, Washington’s Potomac was filled with enormous fish – six-foot sturgeon, and oysters up to 14”.) Niemcewicz also commented on the racial division of the catch; the gar and one species of catfish, “which is black, is left for the blacks,” while the white catfish, perch, and “tobacco box” fish were considered fit for whites to eat.

Once the fish were removed from the net, they were brought to tables where the fish heads were removed and the fish were drawn, the innards being removed. Enslaved workers were required for these tasks as well, down to the construction of barrels for fish to be stored in. Fish were rinsed in a brine solution and then packed in barrels, about 800 to a barrel with alternating layers of fish and salt. The fish were packed head to tail, with the backs down and the open stomachs up, rather than flat. This allowed the stomach cavity to be filled with salt.

The combined weight of fish and salt tended to compress the packing and excess water was poured off as it collected on top. Then the barrels were moved to storage. This method of preservation allowed the fish to remain edible for incredibly long periods of time, well in excess of a year.

Contemporary preservation techniques meant that the fish would be gutted and packed in salt, tightly layered in barrels, head to tail and upside-down so salt filled the interior cavities. 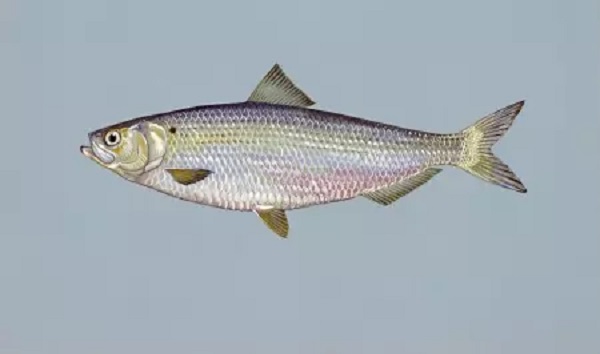 Herring from the Potomac at Mount Vernon were the common blueback. In Washington's time, they were about 15 to 18 inches in length and about ¾ pound in weight.

One issue to be met before each fish run was obtaining an adequate supply of salt. The best and only really acceptable salt was Lisbon salt. It was made by flooding large land areas with salt water, allowing the sun to evaporate the water and leaving the salt, a slow process. This provided a product that was stable and did not hydrate or draw up moisture rapidly. Thus it did not melt easily in contact with, for example, wet herring. It preserved well, was easily transported, and easily stored.

However, this salt was very difficult to come by, because it had to be imported from Libson, Portugal. By English law, Virginia and the other southern colonies were unable to import Lisbon salt directly. If a Virginia ship took a cargo to Lisbon, traded and bought salt, the ship had to sail to England, clear customs, pay duty on the salt, then sail for the colonies. Many times the salt was required to be delivered first to a northern colony for transshipment to Virginia. This added to the time for delivery and substantially increased the cost.

Salt from Liverpool, England, in contrast, was made by boiling sea water and resulted in a salt not much different from that in use today, although much more crude. This salt was allowed to enter the southern colonies and was preferred for domestic use. However, it was found, by long experience in warm climates, to be too weak to accomplish preservation. The fish or meat preserved or cured with it turned rusty in color and, in six or eight months, was unfit for eating.

If packed correctly, herring could last up to a year, if not more, making it an ideal ration for enslaved people as well as a promising export. In his young days as master of Mount Vernon, Washington owned two vessels capable of navigating rivers and oceans for trade. One of these, a schooner with no recorded name, was built in 1765 at Mount Vernon by enslaved carpenters trained by John Askew. The schooner carried timber, grain, and other goods along the rivers of Virginia, and brought herring as far as Antigua. Washington also used the vessel for recreational fishing trips.

In 1774, Washington acquired the brig Fairfax, a vessel that he had originally hired to ship flour from Mount Vernon. The captain, however, had failed to pay Washington, and a court order put the brig up for sale. Washington wrote in that year that he “had no desire of being concerned in Shipping,” having realized that seagoing vessels were too expensive to maintain himself, but nevertheless he bought the brig when no other buyers came forward. Renamed the Farmer, it carried fish and other goods to such destinations as Portugal and Jamaica, before Washington resold it in 1775.

Although Washington managed his own shipping for only a few years, his Potomac fisheries were an important source of revenue for the rest of his life. He held shares in other shipping vessels, and routinely sold his fish to merchants. Washington was also a careful businessman, trying his best to get the highest price. Even while president, he wrote from Philadelphia telling his manager William Pearce that he hoped to sell his surplus to Alexander Smith of Alexandria, but asked Pearce to enquire after better prices before committing to Smith’s, which were “very low.” While he was away he also had his manager help him rent out his “best” landing, modeling his business venture on that of his neighbor George Mason.

Fish were clearly profitable; as early as 1772, Washington sold surplus herring and shad for 184 pounds and by 1797, sold them for 165. Through his different ventures, fisheries remained an annual source of income from Washington’s earliest years as master of Mount Vernon to the end of his life.

Research plus images & much more are directly available from the MountVernon.org website.