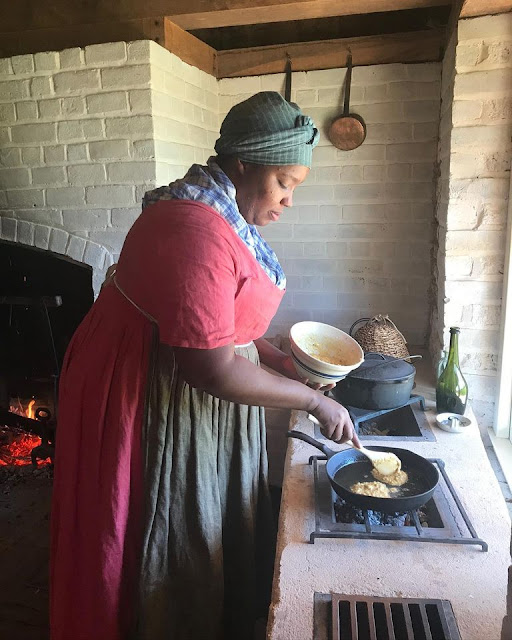 Poplar Forest researchers tell us that dining at Poplar Forest consisted of “simple plantation fare”  mostly poultry and vegetables. As the years went on and Jefferson began inviting nearby neighbors to dinner, visitors would bring a variety of foods to the dinner table. Ellen Randolph Coolidge noted the various foods given represented “the products of rich farms and an abundant country.”

Though the family received these gifts, and also purchased a variety of food from the enslaved community, Jefferson continued to utilize the term “simple plantation fare” when describing Poplar Forest cuisine. In July of 1819, Jefferson sought to remedy this by reaching out to a supplier and ordering foods not often found at the Poplar Forest dining room table. Jefferson wrote, “We are here, Ellen, Cornelia, and myself for two months to come, and living on plantation fare this may be considerably improved if you can send us by a Lynchburg boat, addressed to Mr. Archibl. Robertson a keg of tongues and sounds, a small keg of crackers, a small box of raisins, and a good cheese.”

Born in 1770 at Monticello, Hannah and her family were moved to Poplar Forest when she was a teenager. There she met and married Solomon. Like others who married within the plantation community, Hannah established a new household with her husband...The fate of Solomon is unclear, but he was no longer living at Poplar Forest by the mid-1790’s. He left behind his wife and three young children.

By 1810, Hannah married Hall, a plantation blacksmith and hog-keeper. The couple lived together with her five younger children. Hannah’s last child was born in 1812.

Hannah worked in the fields and probably spent some of her time spinning flax...Her mother, Cate, trained girls to spin, and Hannah might have learned that skill at an early age. By 1811, she served as Jefferson’s housekeeper, preparing the house for his visits, cooking and washing for him, and greeting visitors in his absence...a cabin was built for her near Jefferson’s vegetable garden.

Hannah could read and write, skills that she probably shared with other slaves. Archaeologists discovered pieces of a writing slate at a slave quarte...A single surviving letter written in 1818 from Hannah to Jefferson describes the state of the house and sends wishes for his health. Hannah also expressed her Christian faith in the letter, one of the few hints that survive of the spiritual beliefs of people living at Poplar Forest.

While Hannah’s letter points to the importance of Christianity in her life, other Poplar Forest slaves maintained spiritual and healing practices derived from Africa. When Hall became ill in 1819, he believed that only a conjurer could cure him. Hannah’s brother Phill used medicine from a “negroe doctor” provided by a fellow slave. Both men died that year.

Hannah’s life is last recorded in an 1821 provision list. Whether she lived beyond the sale of her son William and the breakup of the community following Jefferson’s death is 1826 is unclear.

Working from his own designs, Jefferson began building a residence at Poplar Forest in 1806....Construction was nearing completion when Jefferson's presidency ended in 1809. Throughout his retirement years, Jefferson would make Poplar Forest his personal retreat from the busy, crowded scene at Monticello.

Before 1809, Jefferson managed Poplar Forest from a distance, but that practice changed with retirement. Freed from government service, Jefferson made at least three annual visits to Poplar Forest. He traveled to Bedford at the height of spring, in late summer, & in early winter. He described his retreat as "the best dwelling house in the state, except that of Monticello; perhaps preferable to that, as more proportioned to the faculties of a private citizen."

Though Jefferson enjoyed the privacy of Poplar Forest, he was not entirely alone there. Two of his granddaughters generally accompanied him. His granddaughter Ellen Randolph Coolidge later recalled Jefferson's days in Bedford County. "At Poplar Forest," Ellen wrote, "he found in a pleasant home, rest, leisure, power to carry on his favorite pursuits—to think, to study, to read—whilst the presence of part of his family took away all character of solitude from his retreat. His young grand-daughters were there to enliven it for him, to make his tea, preside over his dinner table, accompany him in his walks, in his occasional drives, & be with him at the time he most enjoyed society, from tea till bed time."

All this research & image & much more is directly from the Poplar Forest website - to begin exploring, just click the highlighted acknowledgment above.