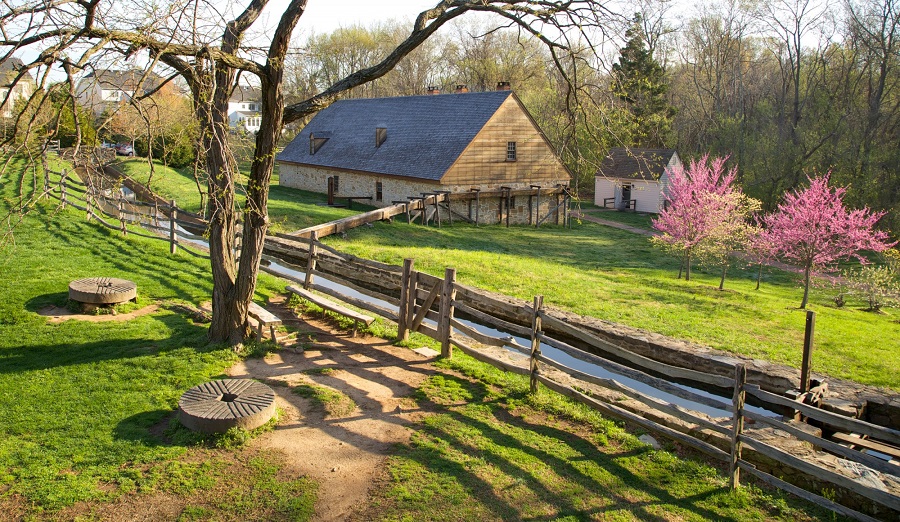 After serving eight years as President, George Washington retired from public life to spend his remaining two-and-a-half-years at his beloved Mount Vernon.  At this time in George Washington’s life, he was actively trying to simplify his farming operations and reduce his expansive land holdings. But always keen to enterprises that might earn him extra income, Washington became intrigued by the profit potential that a distillery might bring in.

In January 1797, Scotsman James Anderson, a newly hired manager, proposed that George Washington begin rye and corn whiskey production. Anderson was raised on his father's farm about 40 miles north of Edinburgh, Scotland, where he managed a farm. In the early 1790s, he moved his family to the United States, where he rented a farm in Fairfax County for 2 years, while he managed farms for other people. He agreed to work as a farm manager for George Washington in October of 1796.

Trusting his farm manager's expertise, Washington ordered a stone still house and a small malt house to be built adjacent to the gristmill on Dogue Creek, about two miles from the Mansion. Construction began in October of 1797 for a stone still house large enough for five stills. The foundation was large river rocks brought from the Falls of the Potomac, and the walls of the distillery were made of sandstone quarried from Mount Vernon. 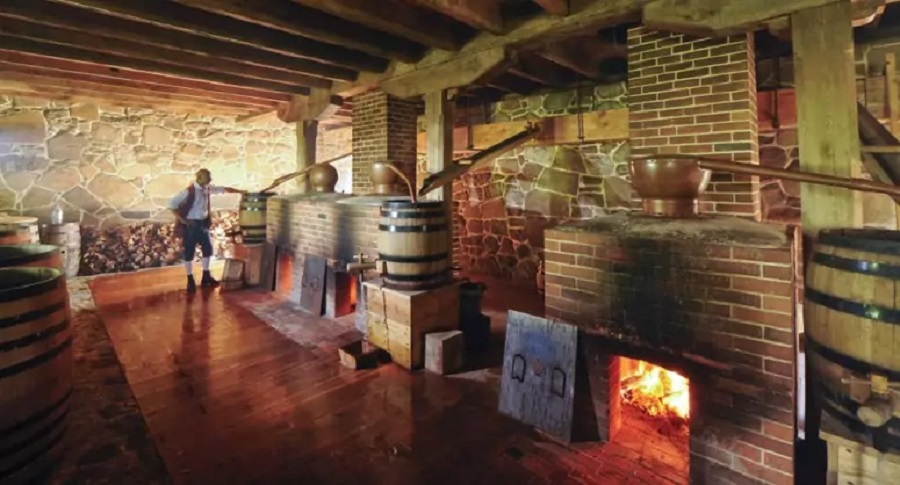 The still house was furnished with copper stills, boilers, and tubs. Wooden troughs were constructed to channel water from the creek to cool the vapor of the heated mash.  That Washington was willing to commit to distilling by building  a relatively large distilling operation is evidence of his desire to pursue the most innovative and creative farming practices of the day. Despite having no prior experience in distilling, he quickly became acquainted with the process.

Washington's distillery had five copper pot stills, made by George McMunn, an Alexandria coppersmith, which held a total capacity of 616 gallons. Fifty mash tubs, large 120-gallon barrels made of oak, were located at Washington’s distillery in 1799. In Washington’s day, cooking the grain and fermenting the mash all happened in the same container. The boiler, where the hot water would have come from, held 210 gallons.

Washington attempted to persuade Anderson to choose a site closer to the Mansion in order to keep a closer eye on his new distillery. Washington was later convinced that the distillation process made proximity to water crucial. The busy complex on Dogue Creek included a substantial merchant mill, a distillery, a cooper's shop, the miller's house, and livestock pens, all located on the main road to Alexandria or to points south. Recognizing the area as Mount Vernon's economic center, Anderson requested to relocate his residence to the center of activity. 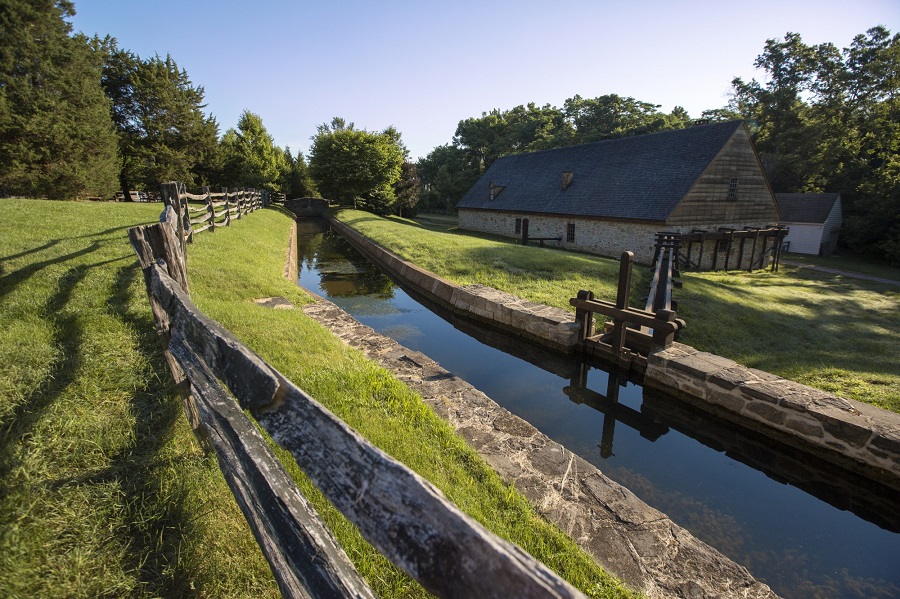 By the spring of 1798 the distillery was in operation. In 1799—the year of Washington's death—over eighty transactions are noted for a total sale of 10,942 gallons of whiskey, valued at $7,674. In 1799, Washington's distillery produced nearly 11,000 gallons, making it one of the largest whiskey distilleries in America.

Enslaved distillers Hanson, Peter, Nat, Daniel, James, and Timothy performed the hot and tiring work of making whiskey from a combination of rye, wheat, corn, and malted barley. These men likely slept above the distillery during the busy season.

Alcohol played a large role in the lives of most people in the 1700s. It was drunk at home & during social occasions and used medicinally. It also served as a trading commodity. Washington enjoyed a variety of beverages, among his favorites were old-fashioned elderberry wine & sweet fortified wines like Madeira and Port. He also drank beer, rum punch, porter, and whiskey.

Customers listed in his records included neighboring farmers, merchants, family, and Mount Vernon overseers. Washington’s whiskey was sold to neighbors and in stores in Alexandria and Richmond, VA. His best customer was his close friend George Gilpin, Alexandria's surveyor, mapmaker, politician, wharf owner, collector of customs, 1st judge of the Orphans Court, harbor master, inspector of tobacco & flour, postmaster & more. Gilpin was also a member of the same Masonic Lodge as Washington and was a pallbearer at Washington's funeral. Gilpin apparently also owned a store in Alexandria, where he sold the whiskey. Other Alexandria merchants also bought large quantities to resell. 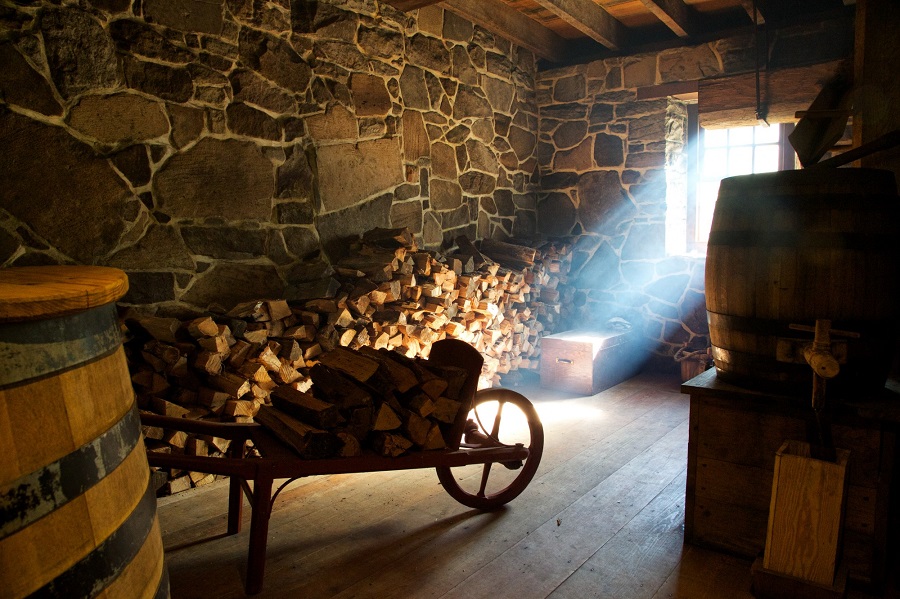 Local farmers purchased or traded grain for whiskey. Many of the people who worked at Mount Vernon also purchased whiskey. The common whiskey cost about 50 cents per gallon. The rectified and fourth distilled whiskey was about $1.00 a gallon, and brandy was a little more. Consumers would pay in cash or sometimes barter goods. Whiskey was also exchanged for services in the case of family physician James Craik and the farm overseers, and for goods such as corn and rye, which would then be converted into more whiskey.

The most common beverage produced at Washington’s distillery was a whiskey made from 60% rye, 35% corn, and 5% malted barley. This rye was distilled twice and sold as common whiskey. Smaller amounts were distilled up to four times, making them more expensive. Some whiskey was rectified (filtered to remove impurities) or flavored with cinnamon or persimmons. Wheat was also distilled when rye was scarce. Apple, peach, and persimmon brandies were produced and also vinegar.

Washington’s whiskey was not bottled or branded. The whiskey coming from the distillery was poured into wooden barrels, usually 31 gallons in size, and shipped to nearby merchants.

Prior to the American Revolution, rum was the distilled beverage of choice. But after the war, whiskey quickly grew to displace rum as America’s favorite distilled beverage. Rum, which required molasses from the British West Indies, was more expensive and less easily acquired than locally grown wheat, rye, and corn. Whiskey was also easier to produce than rum, requiring relatively simple processes and equipment.

As with his mill, Washington processed the harvests from his own farms but purchased & traded for grain from outside sources as well. Washington was clearly not interested in simply supplying the needs of his plantation community, but considered the enterprise to be a thriving moneymaker.

The distillery also offered an important subsidiary benefit. Washington’s interest in the distillery operation was further heightened by his knowledge that much of the waste (or slop) from the fermentation process could be fed to his growing number of hogs. Washington created a hog pen near the distillery which held upwards of 150 pigs.

In 1798, Polish visitor Julian Niemcewicz toured the site and noted: "If this distillery produces poison for men, it offers in return the most delicate and the most succulent feed for pigs. They keep 150...of the Guinea type, short feet, hollow backs and so excessively bulky that they can hardly drag their big bellies on the ground. Their venerable and corpulent appearance recalled to me our Dominican convents, like so many priors." 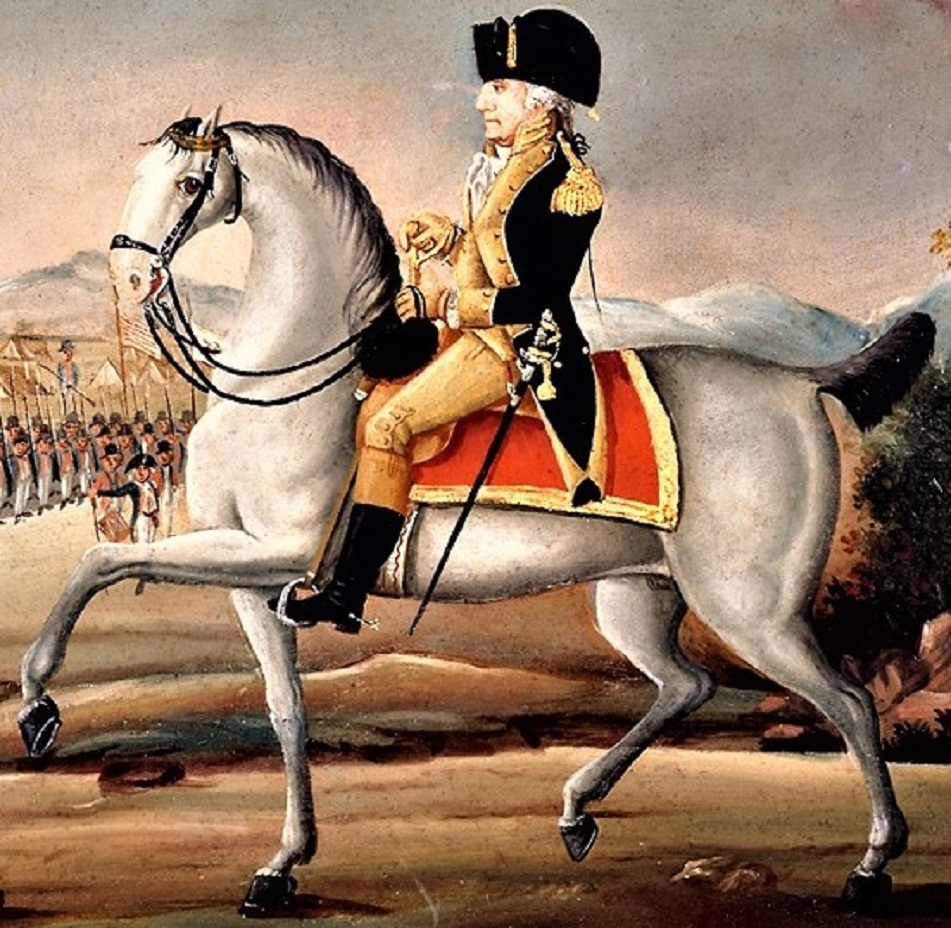 1800 Detail of Painting by Frederick Kemmelmeyer of General George Washington during the 1794 Whiskey Rebellion
Washington paid tax on the output of his distillery. In the 1790s a federal excise tax was collected from distilleries based upon the capacity of the stills and the number of months they distilled. In 1798, Washington paid a tax of $332 on 616 gallons operating 12 months. This “whiskey tax” was enacted during his presidency, and it immediately raised strong protests from westerners who saw this tax as an unfair assault on their growing source of income. By the middle of 1794, the armed threats and violence against tax collectors sent to secure the revenue came to a head. Under great pressure to deal with this insurrection, Washington called out the militia and led 12,950 men into Western Pennsylvania. Confronted by the Commander in Chief and this sizable military force, the Whiskey Rebellion was put down and the right of the Federal government to tax its population was sustained.

Despite the controversial tax, whiskey proved to be the most profitable of Washington's many business ventures. Anderson remained at the plantation as farm manager until Martha Washington's death in 1802.

All this research plus images & much more is directly from the Mount Vernon website - just click the highlighted acknowledgment above.
at 4:00 AM