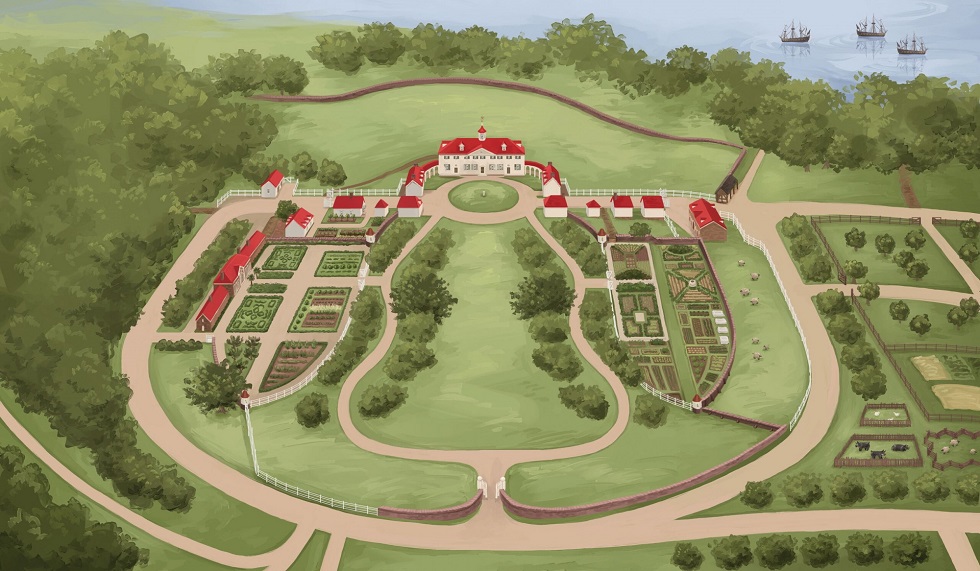 The Digital Encyclopedia of George Washington tells us that Washington's vision for the layout of his Mount Vernon estate adopted fashionable ideas in landscape design borrowed from various English sources and wedded them with the natural advantages of the lush Virginia countryside and its breathtaking view of the Potomac River. Over a period of four decades Washington enlarged and embellished his house during two separate major campaigns of building, constructed a new set of outbuildings to complement the expanded dwelling, and completely reorganized the surrounding gardens and grounds to create an appropriate setting for a tasteful country gentleman's seat.

Washington's interests in creating an appropriate landscape setting for his home and for reinventing Mount Vernon as the very model of a modern agricultural enterprise lead him to extend the plan outward to the far boundaries of his 8,000-acre holding. The layout of the road system, the configuration of the farms and the fields, the placement and arrangement of outlying slave quarters and agricultural buildings, the creation of scenic vistas, and even the design of fences and gates all held prominent places within Washington's thinking. These activities and interests all reflected Washington's deeply held belief in the symbolic power of appearance as well as his conviction that the look of one's property—as with a nation's public buildings and internal improvements—were an accurate indication of the owners' character.

One element of the overall design that Washington devoted considerable attention to over the years was the management of access to the mansion. Washington was a firm believer in the lasting importance of first impressions and this concern was translated into a careful consideration of visitors' experiences as they entered his estate. During Washington's lifetime most visitors to Mount Vernon came to the estate overland on horseback or via carriage, using the relatively arduous system of roads in existence at the time. Over the years, Washington carried out a number of improvements to the approach, including cutting vistas to allow travelers to glimpse the Mansion in the distance.

Washington was engaged in establishing vistas beginning as early as 1785, with the intent for the vistas to serve as avenues to view attractive scenes. This was a feature that was encouraged by any number of proponents of the English "naturalistic" school of landscape designers. As might be expected, at Mount Vernon the mansion was the focal point of all of the vistas.

In the eighteenth century the road from Alexandria to Colchester and southwards to Fredericksburg was divided into an inland or "back road" and a "river road," as it passed through the Mount Vernon vicinity. On the south the road forked at a point just north of Pohick Creek, a few miles from Colchester, and reunited at Hunting Creek, a few miles south of Alexandria. Following the line across the smoothest terrain, the inland road followed a mainly north-south running ridge; the river road provided a more convenient link to major waterfront land holdings like Mount Vernon and crossed several streams at the first fording area above its junctions with the Potomac River.

Travelers following the river road to Mount Vernon from the south turned onto a smaller road, or lane near Washington's gristmill that lead to Posey's ferry landing. From that point travelers traversed a second road north to the West Gate entrance to the Mount Vernon estate. When traveling from the north visitors navigated the river road until they reached Gum Springs, the crossing point over Little Hunting Creek, then turning onto the road leading to West Gate. Around 1770 a more direct route for travelers coming from the south was provided by a road (in later years referred to as Mount Vernon "avenue" or "lane") running in a direct line from a point on the river road north of Washington's gristmill to Mount Vernon's West Gate. With only minor modifications, this basic road configuration remained in place until after the Civil War.

All this research plus images & much more is directly from the Mount Vernon website - to begin exploring, just click the highlighted acknowledgment above.