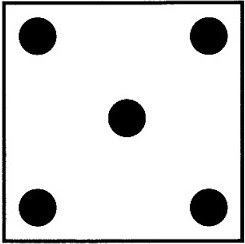 The ever practical Charles Carroll of Annapolis, one of the richest men in the British American colonies, advised his son to plant the flat beds on his terraces in the classical quincunx style. With this form, Carroll could present an ordered, ancient design and by planting privet instead of boxwood, the planter could plant practical vegetables in his elegant design. In 1777, Carroll gave his son privet rather than boxwood to outline his new garden beds & advised him to keep the privet trimmed to a small size, “not to Exceed 12 inches in Width.” Carroll did not want the privet roots to interfere with the smaller vegetables he planned to grow in the beds each season.
Joan Carlile or Carlell (English portrait painter, 1600–1679), Sir Thomas Browne

A quincunx is a geometric pattern consisting of five points arranged with 4 of them forming a square or rectangle and a 5th at its center. The English alchemist/physician Sir Thomas Browne (1605-1682) in his 1658 philosophical discourse The Garden of Cyrus: The Quincunciall, Lozenge, or Network Plantations of the Ancients, naturally, artificially, mystically considered, elaborates on the quincunx pattern in art, nature, religionas evidence of "the wisdom of God. Browne claimed that the Persian King Cyrus was the first to plant trees in a quincunx. He also claimed to have discovered, that the form also appeared in the Hanging Gardens of Babylon. Browne saw the regularity of quincunx pattern as creating an orderly world out of nature. During Roman times this was an important concept. During the Middle Ages, it was one of the patterns used for planting medicinal or exotic plants. Seventeenth century English diarist John Evelyn also wrote in his 1664 Pomona, that the pattern was the best way to lay out apple and pear trees. 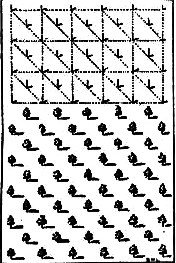 A quincunx pattern for an orchard.

On February 3, 1795, the newspaper Newport Mercury (in Newport, RI) advised planting trees in an orchard "in the quincunx manner." On December 24, 1800, the newspaper Universal Gazette (Washington (DC), explained planting trees, "a quincunx, or a square, at the distance of six to eight feet from each other."

Thomas Jefferson’s brother-in-law Henry Skipwith advised a young orchard gardener in 1813, to consult Virgil to learn about a “quincunx, which is nothing more than a square with a tree at each corner and one in the center and thus continued throughout the orchard.” Adopting conservative, classical forms was common in early Chesapeake gardens. Jefferson himself wrote, “I should prefer the adoption of some one of the models of antiquity which have had the approbation of thousands of years.”
at 5:00 AM